Here is the first photo of a black hole

WASHINGTON — On Wednesday, the Event Horizon Telescope released the first-ever image of a black hole — a historic moment shared by scientists spread across seven simultaneous news conferences around the world. The announcement included the release of seven papers that document how the landmark discovery was made.

As the PBS NewsHour reported Tuesday, the Event Horizon Telescope is a two-year-old, international collaboration bent on capturing direct pictures of black holes:

Scientists at eight radio telescopes observatories — stretching from Hawaii to Greenland to the French Alp to Antarctica — captured images of one black hole in our Milky Way — known as Sagittarius A* — and one in a nearby galaxy called M87, over the course of a week in April 2017. (The PBS NewsHour visited one in Chile when the project was still under discussion).

By linking together, the scientists created, in essence, a planet-sized telescope built to scan massive parts of the skies.

What you’re seeing in the photo

Today’s photo features the supermassive black hole at the center of the M87 galaxy. (The team is still processing the data for Sagittarius A*).

In the image, you’re seeing tiny bits of light — photons — that managed to escape the area near the event horizon, a boundary where the black hole’s massive gravity drags all nearby matter beyond the point of known perception.

“We’ve never actually seen the event horizon — that point of no return where nothing can escape,” National Science Foundation director France Córdova, said at a news conference in Washington, D.C. “This was a Herculean task.” 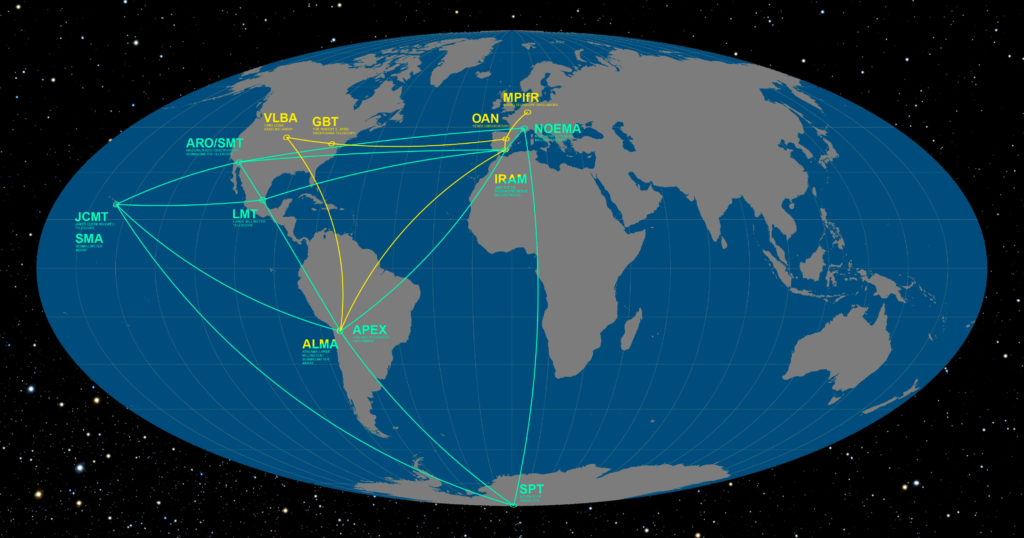 To make the image, the team collected 5 petabytes of data over seven days. A petabyte is equivalent to 5,000 years of MP3 files or the entire selfie collection of 40,000 people over a lifetime, the team said. The final photo is only a few kilobytes, because the team had to process and collapse the data into a file that’s more than a billion times smaller.

Not all photons can make this great escape; the skill is reserved for light rays with a millimeter wavelength. Those narrow rays, also known millimeter radio waves, must then bundle their way through the hot gas and other matter that’s falling into black holes.

“That radio wave then has to travel 60,000 years through the M87 galaxy, and then another 55 million years through intergalactic space” to reach Earth, said Sheperd Doeleman, an astrophysicist with Harvard’s Center for Astrophysics and the project director of the Event Horizon Telescope. He added that those photons then need to survive passage through the greatest danger: water vapor in our atmosphere that can absorb them.

Radio waves from distant celestial objects arrive at different points on Earth at different times. For the Event Horizon Telescope to work, these waves must be matched wave-for-wave at each and every station. To accomplish this, the planet-sized telescope uses ultra-precise atomic clocks, which time stamp the data. Later, when the data are combined, astronomers can ensure that each observatory’s data align with the data from all the rest. GIF by the National Science Foundation

The bright patch at the bottom of the photo confirmed a longstanding prediction about black holes, namely that material around a black hole moves at light speed before it is consumed.

The researchers said this finding makes a clear case for supermassive black holes as the engines of bright galaxies.

Black holes are the architects of stars

Black holes “are sinkholes in spacetime,” said Sera Markoff, a member of the Event Horizon Telescope science council. “They’re helping mold the shape of galaxies and clusters of galaxies.”

M87’s supermassive black hole is almost the size of our entire solar system, and unlike the black hole in the heart of our Milky Way, it is active. That means every once in a while, material will get sucked into the black hole, and get converted into energy that’s released in huge jets.

“When that happens, black holes temporarily become the most powerful engines in the universe,” Markoff said. The jets are carrying the energy equivalent of 10 billion supernova, she said. If you could fly next to M87’s supermassive black hole, here is what it would like:

Markoff said a black hole converts energy almost 100 times better than nuclear fusion at power plants. When black holes releases one of these jets — which are enormous fountains of energy and magnetized material — its contents move at nearly the speed of light.

The jets punch holes through galaxies and clusters of galaxies, heating up all the gas in and around them. This heating process has the counterintuitive result of preventing stars from forming.

Here's the moment when the first black hole image was processed, from the eyes of researcher Katie Bouman. #EHTBlackHole #BlackHoleDay #BlackHole (v/@dfbarajas) pic.twitter.com/n0ZnIoeG1d

“Galaxies grow by forming new stars, so [these black holes] keep galaxies from growing,” Markoff said. M87’s black hole “appears to be affecting the clusters of galaxies near M87 on the scale of hundreds or tens of hundreds of millions of years.”

Black holes have captivated scientists for two centuries. Despite decades of indirect evidence supporting their existence, black holes have never been captured by camera — until now. Aside from helping to resolve Einstein’s theories, this first image of black hole may reveal how the universe started and how it might end. Markoff said the new measurements will lead to finer determinations of other more distant black holes, even those without a photon silhouette.

“That’s why we often say that the black hole is like the atom of the 21st century. It took hundreds of years to find actual physical pictures of an atom, even though we knew atoms must exist,” Robbert Dijkgraaf, Leon Levy Professor and director of the Institute for Advanced Study where Einstein worked, told NewsHour on Tuesday. “We are always looking for places where we reach the limits of our understanding, but we know there must be a solution.”