Climate change could choke parts of the planet. Global shifts in temperature and precipitation can create pockets of two air pollutants — ozone and fine particulate matter — around populated areas, according to a study published Monday in Nature Climate Change.

In a business-as-usual scenario, the consequence would be 60,000 extra deaths annually by 2030 and more than 250,000 deaths per year by 2100. The investigation offers a sense of what places could see the greatest benefit by curbing climate change. 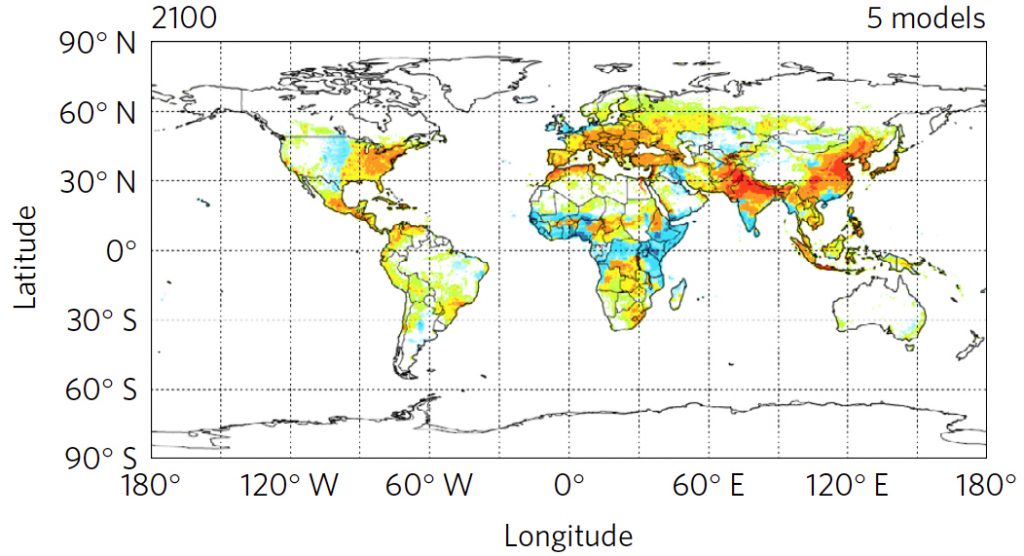 Ozone is not directly emitted by cars or power plants, but rather forms when human-made pollutants — like oxides of nitrogen (NOx) — react with other chemicals in the air.

“The rates of those reactions are faster with the hotter temperatures and the more sunlight,” said J. Jason West, an environmental engineer the University of North Carolina at Chapel Hill who led the study. “So as climate change, we expect ozone to form faster.”

Infrequent rainfall becomes problematic for the future because it’s one of the important ways by which pollutants are removed. So in places due to get drier, West’s team expects more pollution because there’s less removal by rainfall.

Temperature and climate change can also elevate polluting emissions from trees. “Trees emit organic compounds that react in the atmosphere to form ozone and particulate matter,” West said. “Under climate change, we expect that trees will release many more pollutants.”

West and his colleagues predict these negative impacts on global and regional mortality could be prevented by reducing long-lived greenhouse gas emissions.

Prior work by their team found that up to 700,000 lives could be saved annually by 2030 if humans curb their production of air pollutants, including greenhouse gases.