Here’s the first weather report for an exoplanet

Today’s forecast for “HAT-P-7b ,” an exoplanet located 1,040 light years from Earth, may call for cloud cover and blustering winds.

This estimation is based on a study published Monday in Nature Astronomy, the first report to detail persuasive evidence of weather on a planet outside of our Solar System. This new technique for measuring weather patterns on foreign worlds using Earth-based telescopes could aid the search of hospitable planets.

“Our study shows the universe is full of strange and diverse planets, beyond anything we see in our own solar system,” said David Armstrong, study co-author and astrophysicist at the University of Warwick. “This study confirms that exoplanet atmospheres are variable, and gives us some idea of what to look for in the future.”

By the way, clouds on exoplanet HAT-P-7b are potentially made of corundum, the mineral that forms rubies and sapphires.

HAT-P-7b is a gas giant, approximately the size of Jupiter, and it is hot. The exoplanet orbits so close to its star that a single year takes about two Earth days to complete. HAT-P-7b is also tidally locked with its star, meaning the same is always in the sunshine. The dayside is much hotter than the nightside — 4,600 degrees Fahrenheit — and researchers like Armstrong had suspected strong winds might circle the planet in jet streams. But how do you spot winds on a planet that’s a quadrillion miles away?

Using a math model inspired by atmospheric variability for planets in our Solar System and Brown Dwarfs elsewhere in the cosmos, the team determined the reason for the shifts in light intensity on HAT-P-7b were due to changes in the cloud cover on the planet. 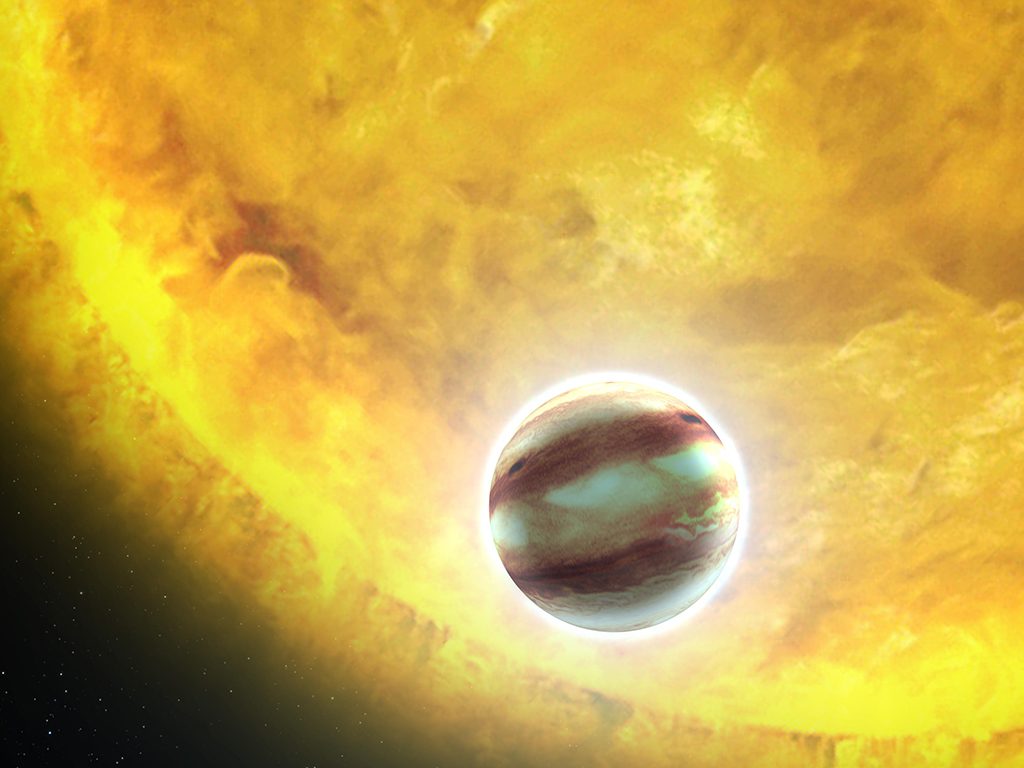 HAT-P-7b was the Hubble Telescope’s 1 millionth observation on July 4, 2011, during a search for water in the atmosphere of an exoplanet located 1,000 light-years away. It is extremely close to its star, which burns much hotter than our sun. Illustration by NASA, ESA, and G. Bacon

“We expect clouds to form on the cold night side of the planet, but they would evaporate quickly on the hotter dayside,” Armstrong said. “When the winds are strong though, they can push clouds from the nightside on to the dayside, leading to huge cloud formations building up before dying away.”

These winds are probably moving fast, like a rate of several thousand miles per hour. And by the way, clouds on exoplanet HAT-P-7b are potentially made of corundum, the mineral that forms rubies and sapphires, the study says.

Princeton astrophysicist James Owen said other labs had made similar atmospheric observations before, but they had used different telescopes and different techniques.

“No one was really sure if the observations were intrinsically due to the exoplanet, or due to the different ways of taking the data,” said Owen, who wasn’t involved with Armstrong’s project. “This is really first time that weatherlike phenomena have been seen or convincingly seen in exoplanets.”

These windy weather patterns occur on a cycle of every couple of Earth weeks, or over the course of several years on HAT-P-7b. Owen said the research will serve as a great guide for searching for weatherlike patterns on other exoplanets, including ones with the size and stature of Earth. For now, cloud cover represents the extent of what could be spotted among Kepler’s extensive data. But future missions like NASA’s James Webb Telescope and the European Space Agency’s Ariel Mission should be able to spot other weatherlike features by examining narrower portions of the light spectrum.

Left: Weatherlike conditions have been detected on HAT-P-7b -- a planet 16 times larger than Earth and more than 1,000 light-years away. Illustration by University of Warwick/Mark Garlick