Here’s the deepest, clearest infrared image of the universe ever produced

President Joe Biden on Monday revealed the very first full-color image from the James Webb Space Telescope, showing a stretch of space studded with thousands of galaxies. It’s the highest resolution image of the infrared universe anyone has ever seen, according to NASA.

“If you held a grain of sand on the tip of your finger at arm’s length, that is the part of the universe that you’re seeing [in this image] — just one little speck of the universe,” NASA Administrator Bill Nelson told the president during an event at the White House. “You’re seeing galaxies that are shining around other galaxies whose light has been bent.”

Nelson added that light travels at 186,000 miles per second, meaning that the light observed in a single “speck” within the image has been traveling for more than 13 billion years. He hinted that future images will capture a time even farther back into the ancient universe to about 13.5 billion years ago, “almost to the beginning.” Webb’s other capabilities will help researchers analyze the chemical composition of the atmosphere of planets beyond our solar system and whether they are potentially habitable, he said.

Vice President Kamala Harris, who chairs the National Space Council, said that Webb, the largest and most powerful tool of its kind, “will enhance what we know about the origins of our universe, our solar system and — possibly — life itself.”

Biden referred to the telescope as a “new window into the history of our universe,” adding that Monday’s image was a glimpse of the first light to shine through it.

“Light where stars were born, and from where they die. Light from the oldest galaxies — the oldest documented light in the history of the universe — from over [13 billion years ago.] It’s hard to even fathom,” the president added, referring to the full suite of inaugural images from Webb to be rolled out on Tuesday.

Having taken nearly three decades to create and launch, the telescope is designed to observe some of the oldest objects in the universe, as well as many that are less ancient and in closer proximity to Earth.

During a live broadcast at 10:30 a.m. EDT, amateur and professional astronomers alike can expect to be dazzled by the range of new images, which includes a nursery where stars are born, an gaseous planet beyond our solar system, a quintet of galaxies, and more, according to the space agency. The briefing will also include spectroscopic data that scientists use to determine characteristics of distant objects.

This isn’t the farthest back we’ve observed. Non-infrared missions like COBE & WMAP saw the universe closer to the Big Bang (~380,000 years after), when there was only microwave background radiation, but no stars or galaxies. Webb sees a few 100 million years after the Big Bang. pic.twitter.com/9CaA1WgtPB

Webb, a successor to the groundbreaking Hubble telescope that revolutionized our understanding of the cosmos, can be considered a kind of time machine, said John Mather, a senior astrophysicist at NASA and senior project scientist with the James Webb Space Telescope. That’s because Webb is receiving the light first emitted by different celestial objects, not as they are today.

“If you look at things really, really, really far away, then you’re looking pretty far back in time, so it starts to add up,” Mather added. “That’s why it’s important to us as scientists.”

Webb is a collaboration between NASA, the Canadian Space Agency (CSA) and the European Space Agency (ESA). It picks up on incredibly faint, ancient light that is still traveling from distant objects across our expanding universe. Over the course of its journey, the original wavelengths have shifted and stretched from visible or ultraviolet light to infrared in a process called cosmological redshift. 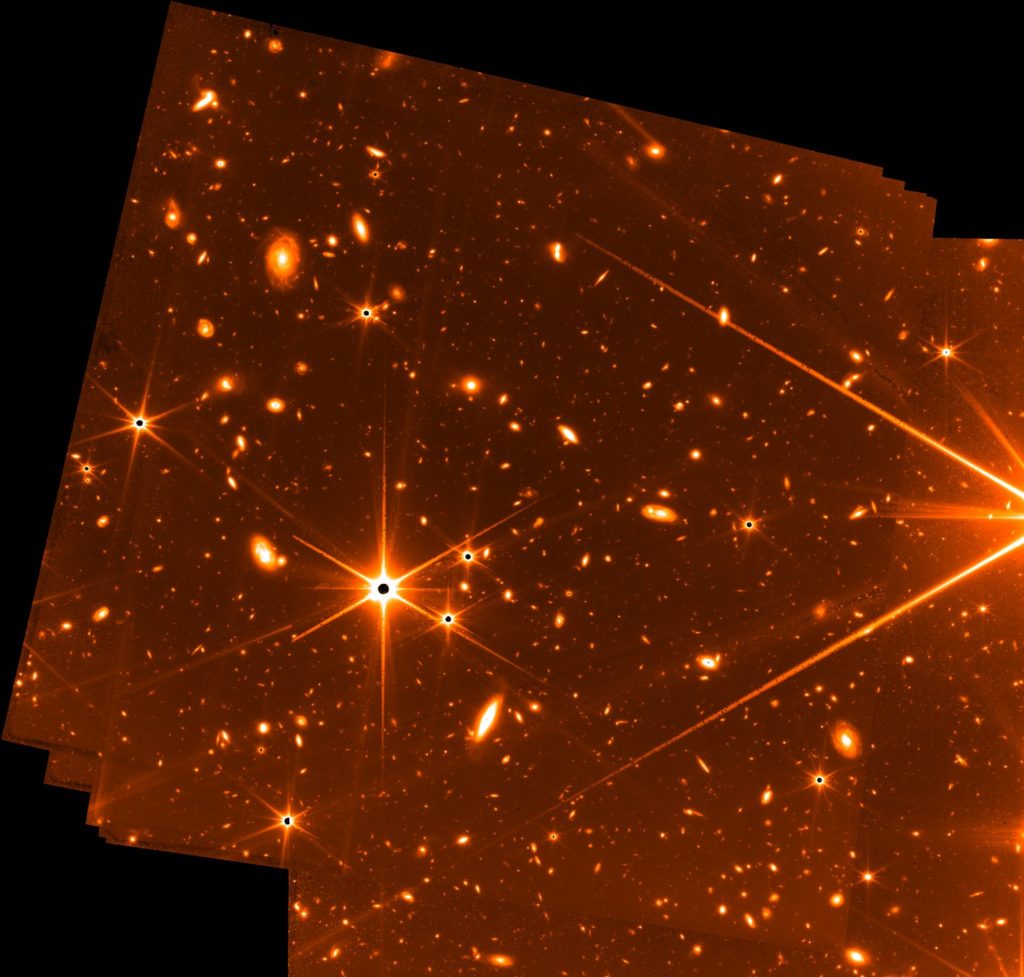 This engineering image represents a total of 32 hours of exposure time at several overlapping points. The observations were not optimized for detection of faint objects, but nevertheless the image captures extremely faint objects and was formerly the deepest image of the infrared sky. Image courtesy NASA, CSA and FGS team.

Prior to this week’s reveal, NASA published an image it had taken during an engineering test of the telescope’s ability to lock onto a target. The collection of stars and galaxies, which appears like amber studded with flares, is another testament to what we can expect from Webb as it kicks off its campaign to get the oldest possible snapshots of the universe.

Left: The first image from NASA’s James Webb Space Telescope is the deepest and sharpest infrared image of the distant universe to date. Thousands of galaxies – including the faintest objects ever observed in the infrared – have appeared in Webb’s view for the first time. Image courtesy of NASA, ESA, CSA and STScI