Honey, I Blew Up the Ants 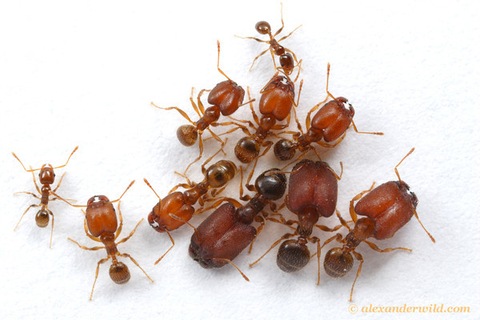 Workers, soldiers and supersoldiers mingle in this ant colony. Photo by Alex Wild at alexanderwild.com.

Updated: 6:30 p.m. ET | In 2006, while collecting ants on an abandoned property in central Long Island, biologist Ehab Abouheif of McGill University noticed eight unusually oversized ants. They were anomalies to the region, but looked similar to the so-called “supersoldier” ants found in the American Southwest.

Supersoldiers are the biggest, baddest ants of the Pheidole ant genus. They loom above their ant brethren with dramatic bulbous heads and sprout two vestigial wings during development. It wasn’t until Abouheif and team had brought the specimen back to the lab that they realized they had found supersoldiers in a region where such things simply didn’t exist.

“We were running up and down the halls,” Abouheif said. “It was just nuts.”

That was Thursday. By Monday, the day the team had planned to start documenting the insects’ behavior, they came in to find them all dead. Another group of tiny pharoah ants had escaped from their enclosure, marched over to the supersoldier colony and killed them all.

Fast forward five years and a lot of research, Abouheif and team have found that with the right formula, otherwise normal Pheidole ants can be induced to develop into supersoldiers. The finding was released on Thursday in the journal Science.

The Pheidole ants are a fantastically diverse genus of ant, containing more than 1,100 species worldwide — that’s a lot — and they’re known for having advanced ant societies. All Pheidole contain at least two worker subcastes — different kinds of workers that divide the labor among the colony. Minor workers tend to the nest and forage for food. Soldiers, about twice the size of minors, defend the nest and process the food. And then there’s the third, less common type: the supersoldiers, which block the nest with their giant heads, protecting the home and other ants from invaders.

That’s right. Ants fight. They surround, immobilize, pin down limbs and tear off body parts. Some have venom. Some spray noxious chemicals at their enemies.

Supersoldiers are a “sort of holy grail for people who work on this genus because they’re so rare,” said Diana Wheeler, professor of entomology at the University of Arizona and a co-author on the study.

Supersoldiers deviate in size from the standard soldier ant — their bodies grow to twice the size and their heads three times the size of soldiers — but also in wing development. A defining feature of soldier ants is that during the larval stage, they sprout a vestigial wing bud, which disappears as the insect gets older. Supersoldiers sprout two of these vestigial discs.

Whether an ant larvae becomes a worker or a soldier is a function of its environment during larval development. There is a so-called “switch point” late in this process, which is largely controlled by nutrition and mediated by something called the juvenile hormone. For example, with enough nutrition during the final larval stage, the ant will grow into a soldier ant and sprout a wing disc. Otherwise, it becomes a minor worker.

Scientists found that by dabbing a hormone called methoprene, which mimics the natural hormone these insects secrete, to the larvae during a precise window of time, they could induce the development of supersoldier-like ants.

“You apply the hormones within a narrow window,” Abouheif said. “And if you hit it in that narrow window, you’re unleashing something.”

They found they could grow supersoldiers in every species they tried, even among those not known to ever have produced supersoldiers, such as the Pheidole morrisi species.

Abouheif’s theory: the potential to become a supersoldier lies latent in every Pheidole ant species.

“It’s there in all Pheidole species and goes back to the ancestor,” he said. “You have this ancestral potential that’s just sitting there, and when you poke at it, you unleash the potential. So when you need it, natural selection can take hold of it and realize it.”

By applying the hormones that transformed otherwise normally developing ants into monster-sized ants, Abouheif’s team was essentially poking at and unleashing that potential.

“There seems to be shadow cryptic gene network in all Pheidoles that could be awakened to produce the supersoldier-like individuals, even in individuals that didn’t have them before,” Wheeler said. “It’s something lying beneath the soldiers. If conditions are right, it can be activated.”

This research, she said, is important to understanding both how developmental systems work, but also to understanding evolution. “It’s an example of a process called genetic accommodation,” Wheeler said. “You can take a broken network like this, and through small modifications, you can get it to be not just something that happens under strange environmental conditions, but something that happens all the time.”

The exciting thing about this research, according to Mary Jane West-Eberhard, a staff scientist with the Smithsonian Tropical Research Institute, “is that it shows how a recurrent, major developmental anomaly – something that used to be called a ‘hopeful monster’ – can become an adaptive trait. This has great general significance, because it is a reminder that it is development that produces the novel forms that are the stuff of evolution.”

Abouheif takes it conceptually a step farther. What they realized, he said, is this extends to all sorts of traits in all sorts of species. Traits believed to be unique to ancient ancestors pop up in animals all the time, he said. Snakes born with limbs; whales with hind legs; humans with vestigial tails or apelike hair. There’s a word for this type of evolutionary throwback: atavism.

Such ancestral traits are common in both animals and plants, West-Eberhard said. She mentions the “sword” in different species of swordtail fish, snakes with vestiges of legs and recurrent wing color patterns of Heliconius butterflies involved in mimicry of other butterflies. All of these traits derived from a common ancestor, she said.

“These have all been viewed as the Barnum and Bailey of evolution,” Abouheif said. “What we’re showing, in fact, is that those are all the product of hidden development potentials that are locked in place… And those things can actually lead to evolution. Those things have immense evolutionary potential.”