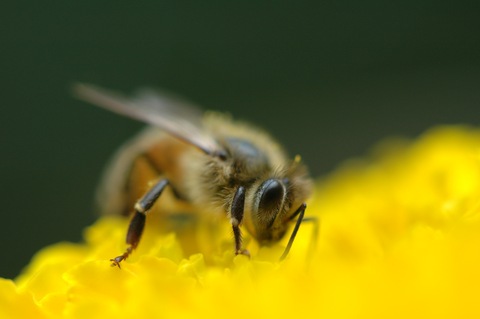 Honeybee colonies are dying at a rate of 30 percent a year, according to a new government report. Photo by Flickr Creative Commons/ Cygnus921.

Update: 4:30 p.m. ET | A new government report on the decline of honeybee colonies in the U.S. stresses that no single cause is responsible for the spiraling losses. Instead, it’s a complex mess of factors that includes exposure to pesticides, lack of food source for the bees and a variety of pests and pathogens. The report was released jointly by the U.S. Department of Agriculture and the EPA on Thursday.

“There is no quick fix,” said May Berenbaum, head of the entomology department at University of Illinois at Urbana-Champaign during a press conference that day. “Patching one hole in a boat that leaks from everywhere isn’t going to stop it from sinking.”

Honeybees pollinate a long list of crops, including almonds, blueberries, strawberries, broccoli, soybeans and alfalfa seed. Some $20 to 30 billion of U.S. agricultural production is dependent on honeybee pollination, according to Sonny Ramaswamy, director of the USDA’s National Institute of Food and Agriculture. And one-third of the nation’s bees are dying each year, according to the report.

There are eight to 10 common viruses, fungal pathogens, bacterial pathogens and a parasitic mite contributing to the deaths, said Michelle Flenniken, a microbiologist and professor at Montana State University, who studies honeybee pathogens.

“Mites are a pathogen themselves,” she said in an interview. “Young mites eat the blood of developing honeybee larvae and cause damage to the larva. They also bite the bee and transmit viruses.” The report calls the parasitic mite Varroa destructor “the single most detrimental pest of honey bees.”

Whereas Europe announced efforts this week to ban a class of pesticides known as neonicotinoids, considered by many to be a critical culprit in honeybee deaths, the U.S. has taken no such steps.

“There are non-trivial costs to society if we get this wrong,” said EPA’s Jim Jones during the press conference, when asked if the U.S. planned to take steps to ban the pesticides. “As a matter of policy, we let science lead our regulatory decision making. We want to make sure we make accurate and appropriate decisions.”

It’s been seven years now since the massive honeybee die off began. But honeybee colonies have been in a gradual decline for decades. The population has dropped from 6 million in 1947 to 3 million in 1990 and stands at about 2.5 million today. One single crop, almonds in California, now require over 60 percent of all managed colonies.

Large areas that specialize in one agricultural crop like corn or almonds can pose a risk to the insects by providing a limited food source. And studies have shown that well nourished honeybees live longer, said Christi Heintz, executive director of Project Apis m.

Her group provides free mustard, buckwheat and sweet clover seeds to targeted farmers to plant additional groundcover for the bees. They encourage almond growers, for example, to plant the seeds on canal banks and roadways where honeybees can forage in the months before the almond crops flower.

Two years ago, we aired this report on the honeybee decline by NewsHour correspondent Spencer Michels. He talked to beekeepers who are feeling the brunt of the decline and scientists using honeybee DNA to investigate viruses, parasites and bacteria.

And behold, the making of that movie: