How alcohol, time and trying to forget trauma can change what we remember

The allegations against Supreme Court nominee Brett Kavanaugh share the two themes of alcohol and how memories change over time.

Christine Blasey Ford, who is scheduled to testify Thursday before the Senate Judiciary Committee, said she consumed a beer at the party where a teenage Brett Kavanaugh allegedly assaulted her; he and his friend Mark Judge had been heavily intoxicated, according to her account.

Deborah Ramirez, who came forward Sunday, alleged that Kavanaugh exposed himself to her during a college party. She recalled being heavily intoxicated at the time, and later required six days of self-reflection and a lawyer consultation to feel confident about her memories.

In a signed declaration submitted to the Senate committee Wednesday, Julie Swetnick detailed a string of drug- and alcohol-filled parties, where she said male students spiked punch with alcohol and drugs and gang raped the women who drank it.

Kavanaugh vehemently denies all of these allegations. In prepared testimony, he said “I never did anything remotely resembling what Dr. Ford describes.” His friend Mark Judge also stated no recollection of the incident with Ford.

It’s easy for those who have ever been drunk or tried to think back on their youth, to assume that alcohol and age always impair your memories. That’s not always the case.

Age plays a role in your memory insomuch as you need to continually remember an event in order to keep the memory strong. You tend to recall recent events because they’re more pertinent to everyday existence, so some of your older memories start to fade. When it comes to alcohol, only one particular state of intoxication — blackouts — can completely knock out your recall, and according to neuroscience, there are certain scenarios in which alcohol can actually improve memory.

Traumatic memories represent an exception, as they tend to stick with us as a sort of survival instinct. However, our desires to mentally avoid or ignore undesirable episodes can lead to trouble with reconstructing aspects of the unpleasant experience.

Here’s what science says about how alcohol, age and memory interplay, and how trying to forget a memory can reinforce or corrode it.

How memory works, a brief primer

About two decades ago, the concept of memory reconsolidation — a process where the mere act of recalling a memory can edit it — landed in the mainstream and bred a misconception. Reconsolidation only occurs under certain circumstances, but a flurry of studies and media coverage led the general public to believe that our memories can’t be trusted.

In truth, our memories are quite good. Our capacity to remember words and facts — semantic memories — persist from childhood. Many of our episodic memories — details about past events — do the same.

Repeatedly dwelling on a traumatic memory can worsen the experience of recalling it.

To understand how long-term memories form, think of your brain as an Instagram account, except if your camera was constantly filming to collect memories.

Your mind is constantly pulling information from your senses and deciding what stories to post to your memory “feed.”

Your attention span and stress levels can alter how clearly the images appear (just like images without the right focus are blurred, memories under high stress or distraction can be fuzzy). No matter what, you don’t capture everything.

What you do post to your memory can stick with you, especially when you go back to look at your old “posts,” otherwise known as memory recall.

“That’s why professors tell students to study over a period of time as opposed to cramming information right before an exam,” said Jennifer Dysart, a social psychologist at John Jay College of Criminal Justice. “The more we think about something or tell a story about something over time, the greater the likelihood that we will remember that event.”

Each time you retrieve a memory, you typically strengthen it. This is especially true for negative experiences versus neutral or positive ones. Repeatedly dwelling on a traumatic memory can worsen the experience of recalling it.

It depends on the level of intoxication.

The early stages of intoxication create a paradoxical effect on creating memories, in that your first drink can actually make it easier to remember things, if consumed right after you experience something. That’s because you feel disinhibited and a little more social. This arousal heightens your attention and aids the process of saving details for later.

But in the moment, every single drink impedes the process of forming memories, known as consolidation.

“The part of the brain that is doing most of the heavy lifting to encode new memory is called the hippocampus,” said Scott Swartzwelder, a professor of psychiatry and behavioral sciences at Duke University. “It’s a structure that happens to be very, very sensitive to alcohol.”

Research shows that memory consolidation remains somewhat intact even up to a blood alcohol content of 0.08 percent — the legal limit.

Yet your ability to record memories doesn’t shut off completely. Research shows that memory consolidation remains somewhat intact even up to a blood alcohol content of 0.08 percent — the legal limit.

“What is interesting is that there is a trend in the data showing that low to moderate blood alcohol concentration (below 0.10 percent) does not affect witness memory so much,” Angelica Hagsand, a cognitive psychologist who specializes in legal psychology at the University of Gothenburg, told the PBS NewsHour via email. “Sober and low-moderately intoxicated witnesses often perform on the same level with respect to identify a culprit in an lineup.”

Once you pass the legal blood alcohol concentration — which usually happens through binge drinking, typically four drinks for women and five for men in the span of two hours — the efficiency of your memory decreases until you black out. During a blackout, you can hold conversation and engage with people, but on the inside, nothing is being recorded to your memory.

There is a step right before blacking out — called brownouts or grayouts — where you’re taking in some of what’s happening. You might have a general memory of going to a house or bar, but you might not remember every detail of what you did there.

Memories come in many varieties. But “recognition memories” are arguably the ones most pertinent to the Kavanaugh allegations. These come to mind when we recognize people or settings from our past. 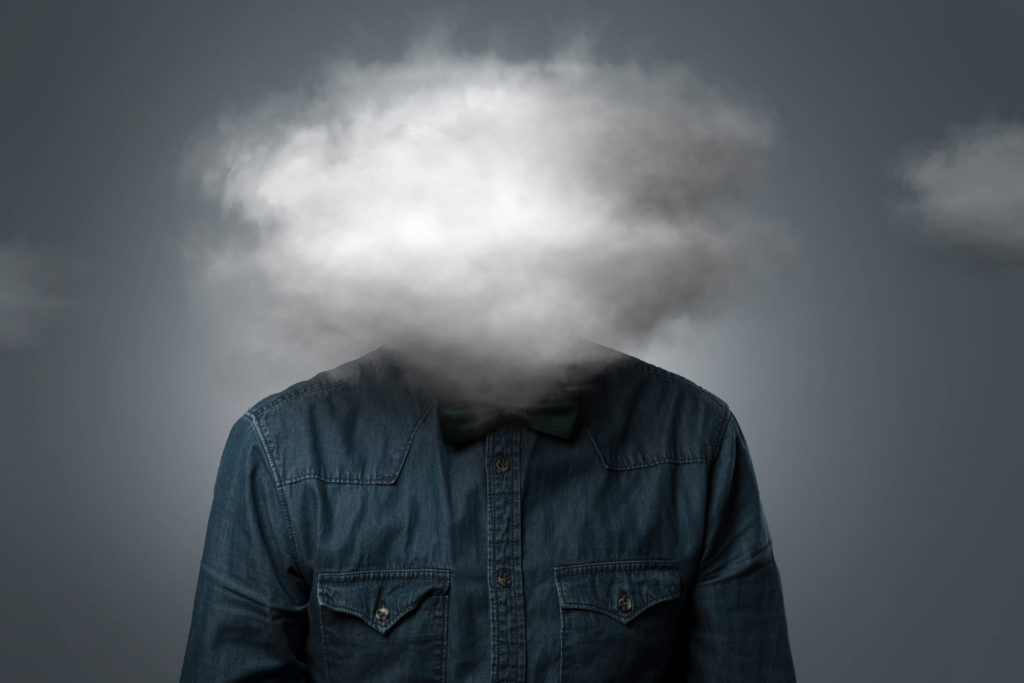 Even high amounts of alcohol can permit the creation of fragmentary memories — up until a blackout occurs. Image by lassedesignen/Adobe Stock

These recognition memories come back to us in two ways. We can “recollect” them — actively recall what happened at a particular place and time.

Or they can surface through “familiarity.” For instance, you recognize a face from your past, but you can’t quite remember from where or when. A familiarity memory must be triggered by an external reminder — a sight, sound, taste, smell or touch.

Alcohol or “benzos” cause blackouts because they impair both recollection and familiarity, said Manoj Doss, a cognitive neuropsychopharmacologist who studies how drugs influence episodic memory at Johns Hopkins University. “Whereas people don’t typically blackout from something like MDMA because it only impairs recollection and not familiarity.”

Emotional events can boost our recollection — namely for specific items in a memory. But emotions do not seem to impact memories triggered by familiarity.

As the NewsHour explained last week, traumatic memories can form after a single, life-threatening event and stick for our entire lives. We hold onto these emotional experiences, so we can avoid them in the future.

Our emotions can also cause us to intentionally forget. Normally, we forget events, facts and our favorite lines from movies because we no longer take the time to recall them on a regular basis. Our brains wipe these memories, which is called active or adaptive forgetting.

“But sometimes we confront reminders to things that we would rather not think about, and when that happens the reminder starts to bring to mind this unpleasant memory,” said Michael Anderson, a cognitive neuroscientist at Cambridge University. “We have the capacity to say, ‘No, stop. I don’t want to go there’ and exclude the unwanted memories from consciousness.”

This process is called motivated forgetting. It is controlled by some of the same brain areas involved in stopping physical actions — like when your hand reaches for a hot stove and you pull away at the last moment. 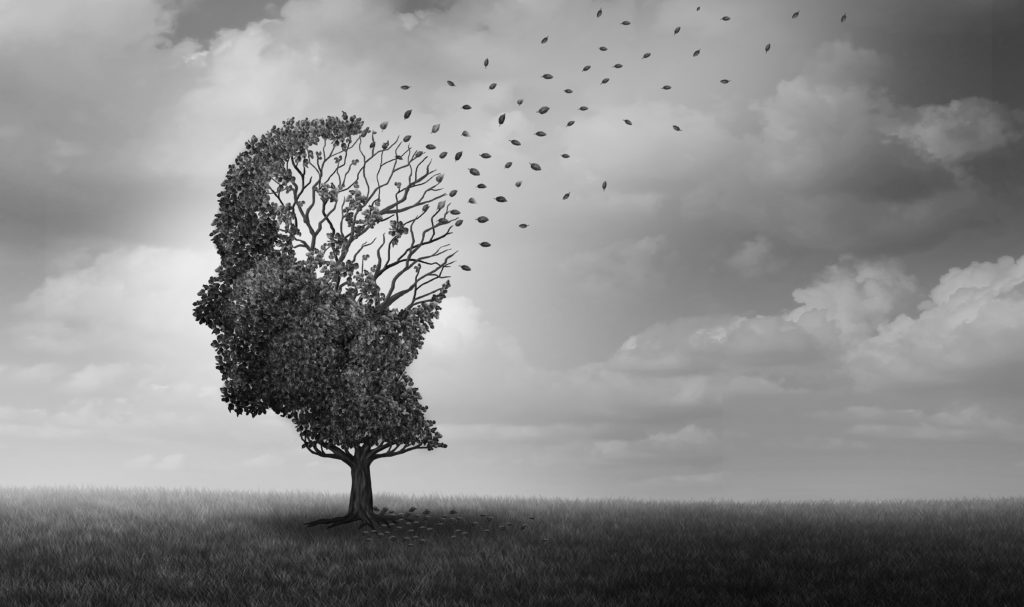 The avoidance of unpleasant memories can cause their erosion. Image by freshidea/Adobe Stock

“The right prefrontal cortex is known to be involved in stopping actions, so we did a study a number of years ago to look to look at its ability to stop memory retrieval,” Anderson said. They found it did exactly that. The prefrontal cortex stopped the ability to retrieve a memory by sending signals into the hippocampus and reducing its activity. Motivated forgetting may explain why some people develop PTSD after a horrific event while others don’t.

“I don’t have all the answers, and I don’t remember as much as I would like to. But the details about that night that bring me here today are ones I will never forget,” Ford stated in her written testimony to Senate. “They have been seared into my memory and have haunted me episodically as an adult.”

If 100 people have a traumatic experience, around 10 percent of those people will get chronic PTSD with intrusive flashbacks that they cannot control, Anderson said. The rest of us get over it, and the memories rarely come to mind.

Over time, motivated forgetting may begin to erode the memory — causing someone to lose chunks of it. Anderson’s lab has found this process can happen in the early days after a memory’s birth.

Eyewitness testimony is most reliable soon after an incident and when people are sober, because of the general memory deficits caused by booze. As time passes, all testimony becomes less reliable not only because of forgetting but due to witness contamination.

“There is even transference, where you are traumatized and you replace the actual perpetrator of the crime with someone that you see often,” said John DeCarlo, a criminal justice professor at the University of New Haven who worked as a police officer in Connecticut for 34 years.

Friends and police interviews can add to memory contamination, as well as a constant stream of news reports about similar incidents.

Friends and police interviews can add to memory contamination, as well as a constant stream of news reports about similar incidents.

That’s because memories are unstable and vulnerable to change early after an event. Once those memories get locked in, even if they contain inaccurate details, they will remain that way.

Certain types of crimes, however, are more likely to occur with intoxicated witnesses, such as intimate partner violence, sexual assault and violence at bars. “You want to test intoxicated witnesses as soon as possible and get their memory report,” Dysart said, and follow with a second test when they’re sober.

If multiple people report similar details, intoxicated or not intoxicated, then their testimonies will be given more weight. Because in general, DeCarlo said, a single intoxicated witness cannot stand alone to convict someone of a crime. Corroboration from other witnesses or physical evidence are essential in these cases, though often difficult to obtain.

“A prosecutor who is very careful is not going to go with just one kind of evidence, whether eyewitness or forensic,” DeCarlo said.