How an underwater robot could help reveal mysteries of the deep

Picture yourself slowly sinking in the sparkling blue waters of the open ocean. At first, the shining sun above makes visible many of the marine creatures floating by. But as you descend, the sunlight begins to dissipate. You’ve reached the ocean’s midwater, or “twilight zone,” a several-thousand-foot stretch of the water column where light eventually becomes nearly unmeasurable.

We know this region of the ocean plays a role in a range of marine phenomena, from climate regulation to co-hosting the largest animal migration on Earth. Yet it’s shrouded in mystery.

Enter Mesobot, a state-of-the-art aquatic explorer designed to help unravel some of those unknowns, and improve our existing knowledge.

Clocking in at around 5 feet in height and length and just over 550 pounds, Mesobot is equipped with a host of cameras and lights and sensors that allow it to act as a kind of roving eyeball, tracking midwater residents as they go about their daily lives. The robot is a collaboration between the Woods Hole Oceanographic Institution (WHOI) and its partners.

Mesobot is also capable of detecting ambient light levels, thanks to a highly sensitive radiometer. And an attachable sampler system — separate from Mesobot itself — can filter seawater in real time to collect environmental DNA, or eDNA. After capturing traces of things like sloughed-off cells, fecal pellets or fish scales, the samples it stores can be brought to a lab for analysis.

One of Mesobot’s top long-term goals? Track the midwater’s many residents — like a fish, a jelly or another creature — to examine their behavior and the role they play in the broader ecosystem.

There are a few pressing reasons for humans to see what’s happening in this part of the sea. When it comes to climate change, for example, understanding how much carbon is sequestered in the depths of the ocean, and how much of it is circulated and eventually returned to the atmosphere, are particularly important questions for researchers.

“Understanding these midwater animals and what their daily lives are is potentially an important part of that puzzle,” said Dana Yoerger, a senior scientist at WHOI and leader of the team that built Mesobot.

Mysteries of the midwater

Every day, marine animals commute thousands of feet from the depths of the midwater — as low as 3,300 feet, or 1,000 meters — to the ocean’s surface, in what’s considered the largest animal migration event on Earth.

There are a few theories as to why sea creatures make this journey, called diel vertical migration, but many researchers believe it’s connected to an age-old calculation made by predators and would-be prey. And it’s clear that light plays a key role.

This animation depicts the daily migration of marine animals from the ocean’s surface to its “twilight zone” in accordance with the rising and setting sun. Animation by NASA via Wikimedia Creative Commons

Traveling to well-lit surface waters does not bode well for creatures hoping to stay out of their predators’ sights, so many may choose to spend their daylight hours where it’s darker. But when the sun goes down, creatures like small crustaceans and fish make the trek up toward the surface to feast on the phytoplankton — the marine equivalent of grass — that thrives on sun. The creatures that prey on those crustaceans are eaten by even larger creatures — you get the idea.

But it’s impossible to avoid predation entirely, especially when predators are clued into their prey’s daily schedule.

“There’s a whole zoo of predator [fish] that cruise out in the middle of the day, dive to 800, 1,000 meters, look for the shadow of a cloud of a school of fish” in the upper part of the twilight zone, said Allan Adams, who serves as principal investigator at MIT’s Future Ocean Lab. He played a key role in engineering Mesobot’s radiometer. “And they shoot up to wherever [smaller fish] are, plow around, eat them, go back up to the surface, warm up and the cycle repeats again.”

The nuances of how light influences animal behavior — where it shines and where it doesn’t, where creatures can reflect it or generate their own via bioluminescence to better ensure their own survival, and where those abilities fail them — are of key interest to marine researchers.

“The denizens of this territory are masters of using light for communication, for counter illumination, for protection — for all sorts of reasons,” Adams said.

He explained that although “most living things in the ocean” engage in diel vertical migration, not every species undergoes that journey every day. Some stay put in the deep for longer than a 24-hour cycle. So while light does play a “crucial role” in influencing those behaviors, “it’s not the whole story.”

That’s why Allan and his team designed a highly-sensitive radiometer that Mesobot can use to record precise measurements of local light sources.

The large-yet-unobtrusive robot can be guided while tethered to a research vessel or run autonomously for around 24 hours. Mesobot’s tracking ability could also offer insights into how the ocean captures carbon dioxide from the atmosphere.

Recent research suggests that “the biomass of fish in the twilight zone may be ten times greater than previously thought,” according to WHOI — a fact that’s likely of great interest to the fishing industry.

Most animals in the twilight zone wouldn’t make it to our dinner plates, but some could be used in fish oil products, or as potential feedstocks for aquaculture.

If commercial fishing companies wanted to harvest that abundant biomass, “it’s defenseless and it’s sitting there during the day,” Adams said. While aquaculture is “valuable and important,” like anything else, it can be carried out irresponsibly in the absence of proper management.

Getting a better sense of the population dynamics and ecological structure of the ocean’s midwater zone is crucial to understanding what kind of protections the creatures that live there may need because, he noted, “you cannot protect what you can’t see.”

Mesobot alone can’t reveal everything about the creatures in the twilight zone. But it can shed more light on these issues, and others that crop up along the way.

A fraction of that carbon is stored in the bodies and poop of these animals, some of which eventually sinks into the deep ocean “where we hope it doesn’t come back for a long time,” said Larry Madin, a senior science advisor at WHOI.

“The degree to which the ocean removes CO2 from the atmosphere is an important aspect of how our climate is regulated, and we know our understanding of the details of this [process is] inadequate,” Yoerger said.

He added that he expects Mesobot’s “unique” capabilities — examining animal behavior, in addition to taking eDNA samples and making physical measurements with tools like the radiometer — will help “fill in important gaps not covered by existing tools.”

Traditional eDNA sampling involves using bottles to capture seawater, bringing that sample up to be filtered aboard a research vessel and then transporting resulting samples to a laboratory on shore.

In contrast, the eDNA sampler that can be attached to Mesobot filters sea water in the depths real time, then stores those samples until scientists can retrieve them to extract and sequence DNA in the lab.

Filtering in situ, or in the water itself, is both more time-efficient and reduces the chance that samples might be contaminated, said Annette Govindarajan, a molecular ecologist at WHOI who played a role in developing the sampler. Those samples can help researchers get an idea of which creatures may have dwelled in a specific area without directly observing them.

“eDNA gives us the ability to detect animals that we might otherwise miss,” Govindarajan said. “It really adds to our toolkit for studying the midwater biodiversity and allows us to get a more comprehensive picture of what’s out there.”

Govindarajan is also interested in Mesobot’s ability to examine midwater creatures that aren’t easily studied through other research methods, especially hard-to-capture fish or “gelatinous animals” that would be destroyed in a traditional plankton net before they could be observed above water. 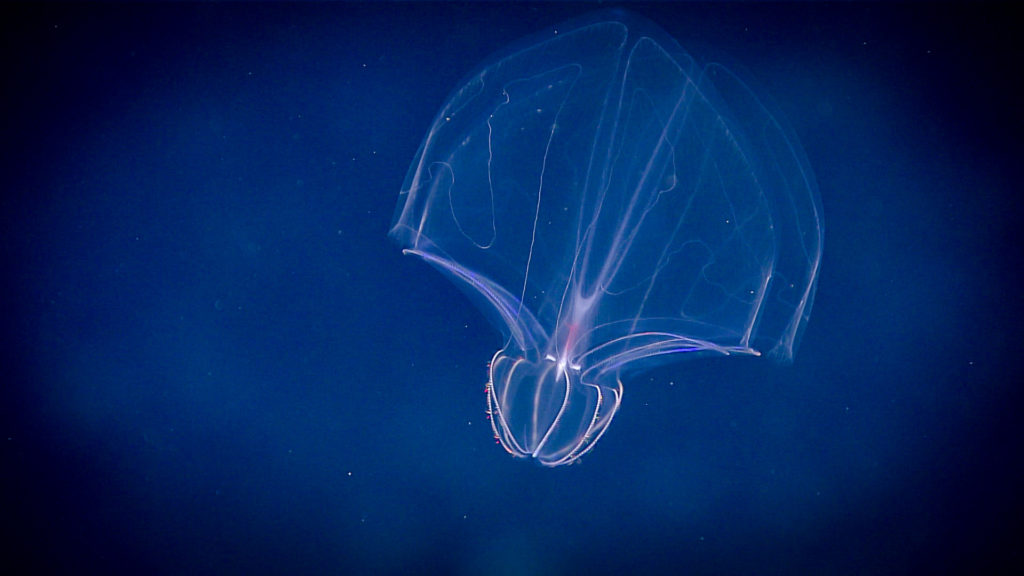 A lobate ctenophore found during a midwater exploration expedition conducted by the National Oceanic and Atmospheric Administration and its partners. Image courtesy of the NOAA Office of Ocean Exploration and Research, Windows to the Deep 2019.

The serendipity of oceanography

Mesobot has a “tremendous reserve of computing power,” and the robot’s instruments and its software will continue to be improved upon over time, Yoerger said.

The robot was built to pursue a wide range of research goals in the midwater region. But he emphasizes that the history of oceanography, like any other type of field science, is marked by “serendipitous” moments of unexpected discovery that occurred alongside other scientific pursuits — like when a whale fall was first observed by scientists in a chance discovery during an unrelated deep-sea exploration event.

“We need to go down there with specific goals,” Yoerger said. “But as you’re doing that, you always have your eyes open for the unexpected. And that’s [when] some of the most exciting things happen.”

Left: One of Mesobot’s top goals is to track creatures in the ocean's "twilight" zone and examine the roles they play in the broader ecosystem. The robot was developed by researchers at the Woods Hole Oceanographic Institution in partnership with the Monterey Bay Aquarium Research Institute (MBARI), the University of Texas Rio Grande Valley and Stanford University. Photo via Evan Kovacs/WHOI