How climate change is making these bamboo-eating lemurs go hungry

Even though it is already the most endangered primate in the world, the greater bamboo lemur just can’t catch a break. Climate change is starving out this Madagascar native, a study published Thursday reports in Current Biology.

These critically endangered lemurs nibble almost entirely on the tender shoots of one bamboo species. But during the dry season, which is normally from August to November, the lemurs switch to the bamboo’s culm–the more readily available but nutrition-less woody trunk. Scientists anticipate as climate change continues to stretch out the dry season, the lemurs will be forced to eat this unappetizing culm.

“The greater bamboo lemur eats a food source that is fairly resilient,” Patricia Wright, a primatologist at Stony Brook University and coauthor of the new study, told PBS NewsHour. “It was a good idea to specialize on bamboo because it’s abundant and it grows fast. It’s capable of withstanding climate change, but the lemurs, unfortunately, can’t adapt as quickly to this altered cycle.”

Why these lemurs need bamboo
The lemurs’ lifestyle evolved to almost perfectly coincide with the bamboo peppered throughout the island’s rainforests.

The primates’ reproductive cycles parallel the bamboo’s growth cycles. When the dry season ends, rain causes the shoots to sprout within two weeks. By that point, baby lemurs also pop out and feed on the bamboo’s protein-rich shoots.

The lemurs’ highly specialized teeth are also similar to the giant panda’s teeth. Both are the only mammals able to grind down culm. But this diet isn’t sustainable for more than a season or two because the culm can wear away their teeth. 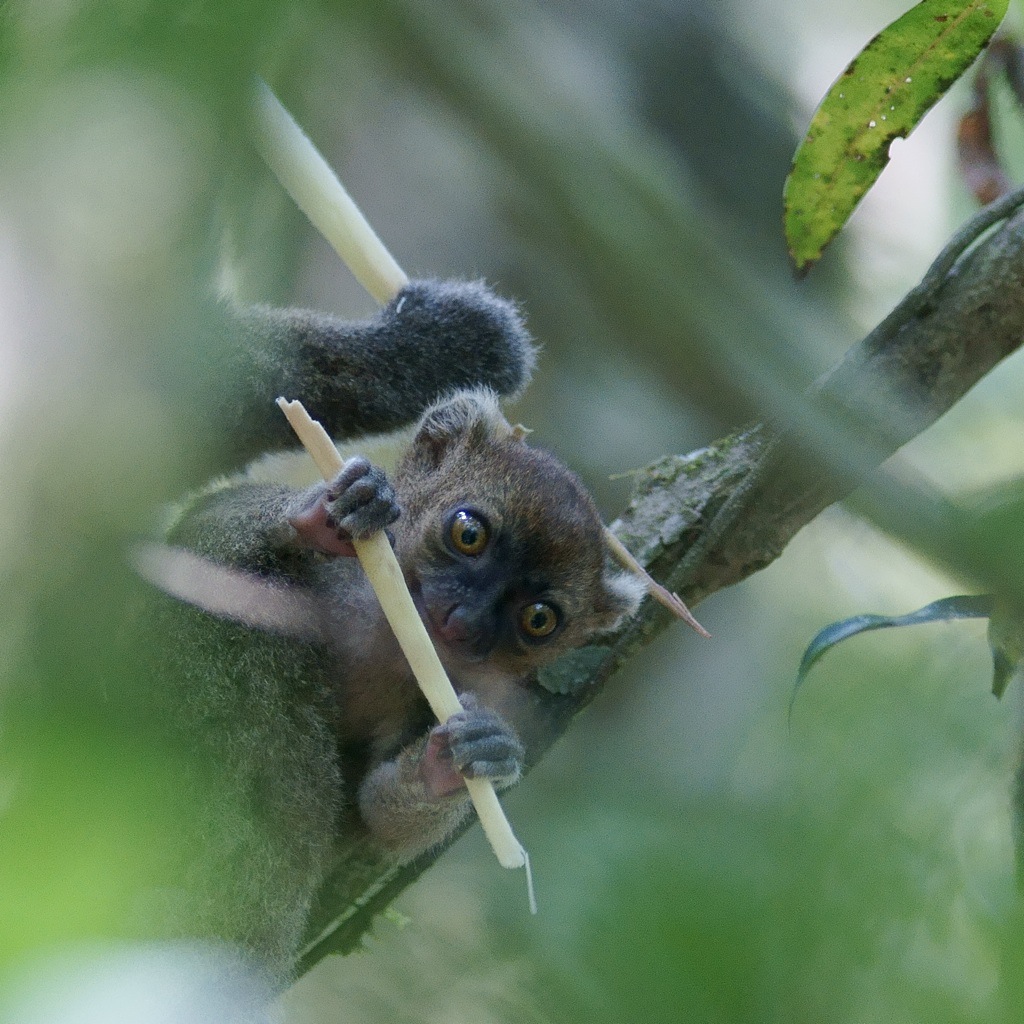 A greater bamboo lemur infant born in the beginning of the rainy season is immediately ready to nibble on bamboo shoots. Photo by Jukka Jernvall

What the scientists found
The researchers determined that climate change is slowly threatening the lemurs by observing the creatures for 18 months. The team cross-referenced their behavior with paleontological records and climate change predictions.

The fossil record revealed that the lemurs once lived throughout the island. Today, the mammals are cornered on the eastern side, which currently has the shortest dry season, and climate models predict this aridness will continue to worsen. And if people continue deforestation practices on the island, the lemurs will have nowhere for retreat. 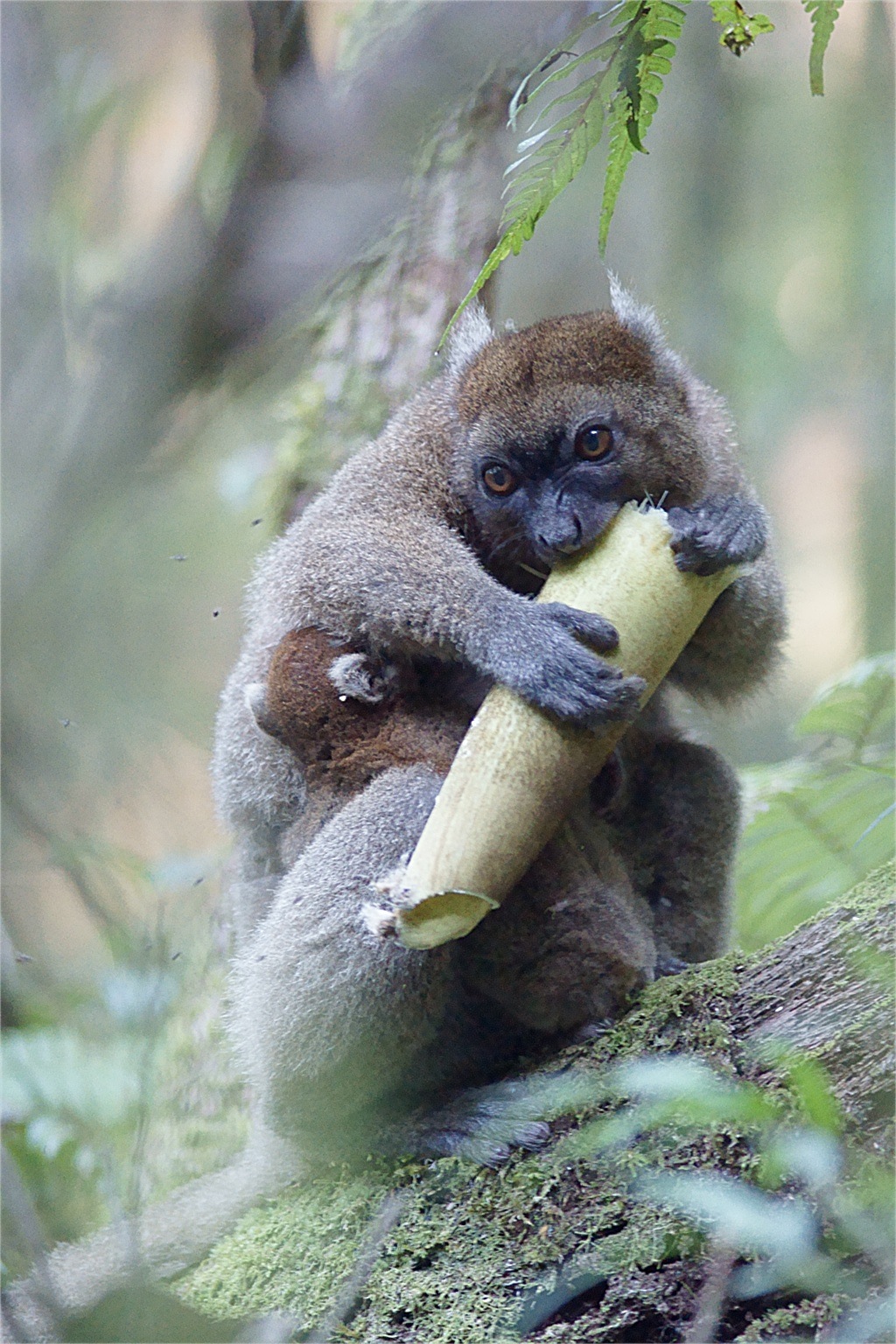 A greater bamboo lemur eats the tough bamboo culm, which it only does during the dry season.
But it prefers bamboo shoots which are more nutritious. Photo by Jukka Jernvall

What can be done
The outlook is looking extremely grim for lemurs, but Wright hopes that Madagascar can grow the current population, which is currently around 600 to 700 wild lemurs.

Wright and her colleagues plan to create bamboo corridors within the rainforests, which will supply habitat with available bamboo to eat. They want to work with local villagers to plant more bamboo and manage artificial irrigation systems when dry seasons persist. They also want to build the local economy by allowing people to harvest a portion of bamboo, while the rest remains with the lemurs. Wright’s conservation plans include relocating lemurs to places on the island where bamboo thrives in longer wet seasons as well.

“We hear a lot about forest destruction, but I believe we’ll be hearing more about forest restoration in Madagascar,” she said. “We’re creating places where both people can be happy and animals can be happy. And we want to help this charming lemur rebound.”

Left: The petite, rotund greater bamboo lemur lives on Madagascar and is considered the most endangered primate on Earth. Photo by Jukka Jernvall