When it comes to exploring ancient monuments like Egyptian pyramids, classic chisels and soft-bristled brush are the excavation tools that come to mind. But for archaeologists, these tools still carry the risk of damaging concealed artifacts and structures.

Fortunately, physicists have non-destructive tools that can literally see through walls.

They’re called cosmic ray particle detectors, and an international team of excavators, engineers and particle physicists recently used them to uncover a large void deep inside the Great Pyramid of Giza (also known as the Khufu Pyramid). This is the second time the researchers, working with the ScanPyramids Project, found a hidden area in Egypt’s iconic pyramids using particle physics, according to a study published Thursday in Nature.

It’s the first big structure found inside the Great Pyramid of Giza since the Middle Ages, when Caliph al Ma’mun discovered the main, internal structure of the pyramid, Mehdi Tayoubi, co-founder of the Heritage Innovation Preservation Institute in Paris and a member of ScanPyramids, said at a press conference Wednesday.

The main corridor, the Grand Gallery, is a passage connecting the Queen’s chamber to King Khufu’s chamber. The researchers stumbled upon a large open space above the gallery — roughly 30 meters long and 6 feet wide — by scanning the entire pyramid with three detectors, developed by three separate teams of researchers. Though each detector looks and works differently, all three could pick up a stream of one type of cosmic particle: the muon. 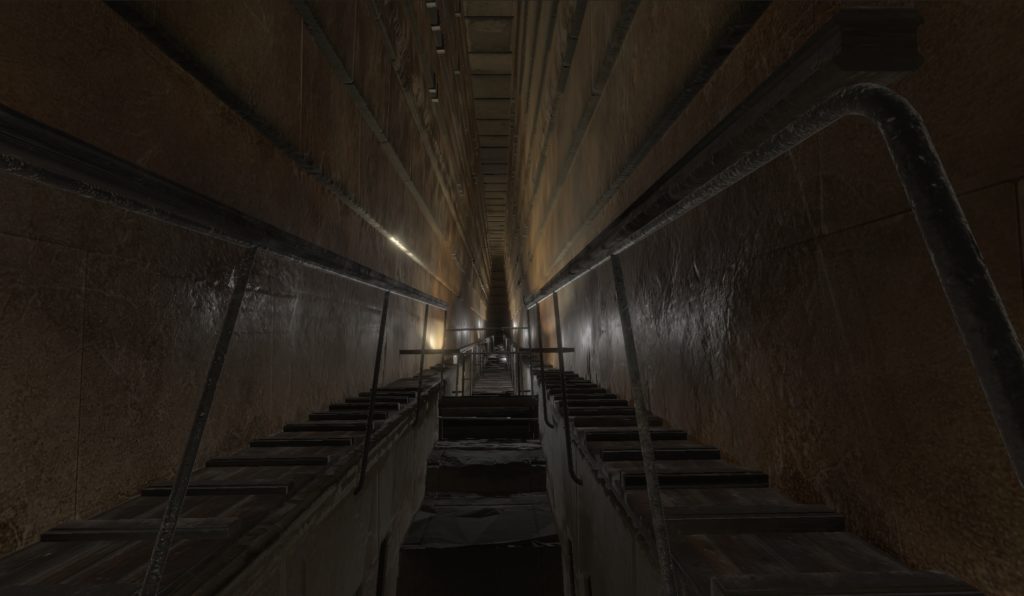 Inside the known Grand Gallery, the pathway between the Queen and King chambers. Photo by the ScanPyramids mission

Cosmic rays constantly wash over the Earth, and when they hit the atmosphere, they create elementary particles called muons–the heavy cousins of electrons. Every minute, about 600 cosmic ray muons rain down and seep through our bodies, our homes and the planet. Don’t worry. They’re not harmful.

Each minute, about 600 cosmic ray muons rain down and seep through our bodies, our homes and the planet. Don’t worry. They’re not harmful.

Due to their larger masses, muons are less likely to get absorbed by or bounce off of rocks, which means they can travel in straight lines — with one exception. A muon loses energy and has a harder time passing through an object if the object’s density isn’t uniform — for example, trying to move through a sheet of metal and then a layer of rock.

Knowing this, the researchers placed the three detectors in places where the hefty particles can travel toward the pyramid along one trajectory. If the pyramids have many layers of dense material, muons are more likely to get absorbed. If they don’t, the particles will pass through less dense or open spaces more easily. 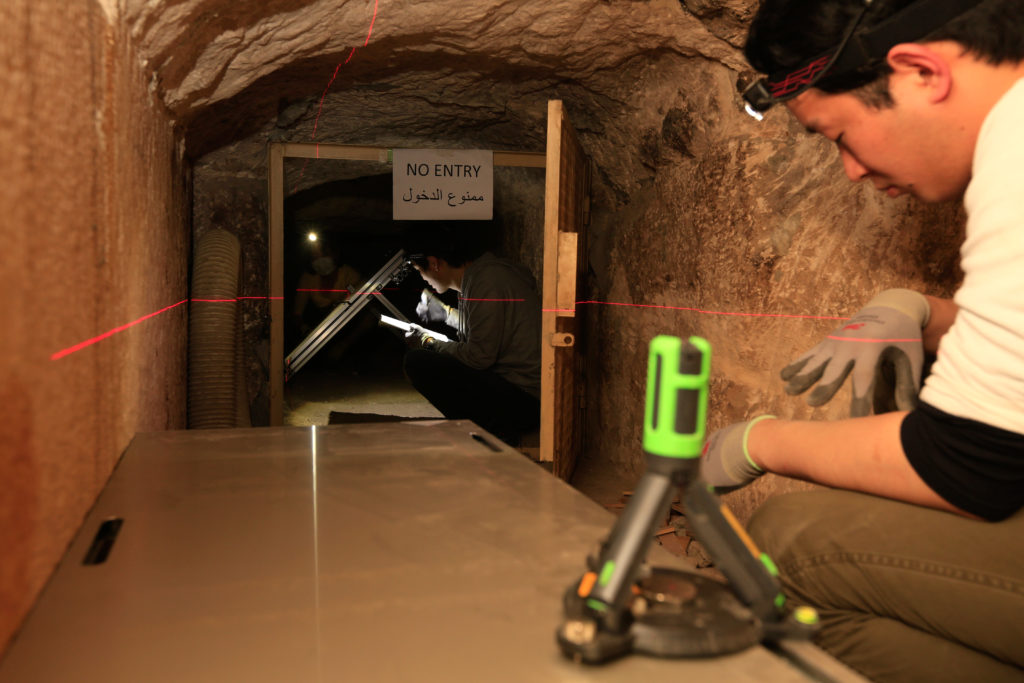 How did the detectors work?

The Nagoya University team from Japan developed chemical emulsion detectors, which act almost like photographic film to capture pictures of particles, and placed them in the Queen’s chamber. The second team, from Japan’s High Energy Accelerator Research Organization, made scintillator detectors that absorb a particle’s energy and re-emit it as light. They were placed inside the north-facing entrance. The last team, the French Alternative Energies and Atomic Energy Commission (CEA), developed electronic argon-gas detectors, which act as a sort of telescope into the super small particle world. These were placed outside the entrance.

The Nagoya team caught the first glimpse of disrupted muon movement, which unveiled the hidden corridor. Soon, data from the other two teams confirmed the size and location of the unseen space.

Though ScanPyramid’s three detectors are some of the most advanced of their kind, the team cannot say for sure what purpose the newly-discovered space has, or whether artifacts are inside. The longer they observe muons, the more the image becomes blurred.

Tayoubi said muon detection is not new. It is essentially the same approach Nobel Laureate Luis Alvarez took in the 1960s when searching for chambers in Egypt’s Khafre Pyramid. “But there is a lot of differences from the technology Alvarez used 50 years ago with the technology we have today,” he explained.

Alvarez developed a tall box made of stacked metal plates and high-pressure gas that could detect muons. Alvarez placed his unit beneath the pyramid, which is usually the least dense area of the structure. Muons were able to pass through, but he did not find any hidden chambers in Khafre. Sebastien Procureur, a researcher at CEA and member of ScanPyramids, said Wednesday that Alvarez’s method is not precise enough to make images, but his work inspired this group to continue making headway on pyramid investigation.

Though ScanPyramid’s three detectors are some of the most advanced of their kind, the team cannot say for sure what purpose the newly-discovered space has, or whether artifacts are inside. The longer they observe muons, the more the image becomes blurred. For now, they simply know that some kind of space exists above the Grand Gallery.

Where else is this technology used? 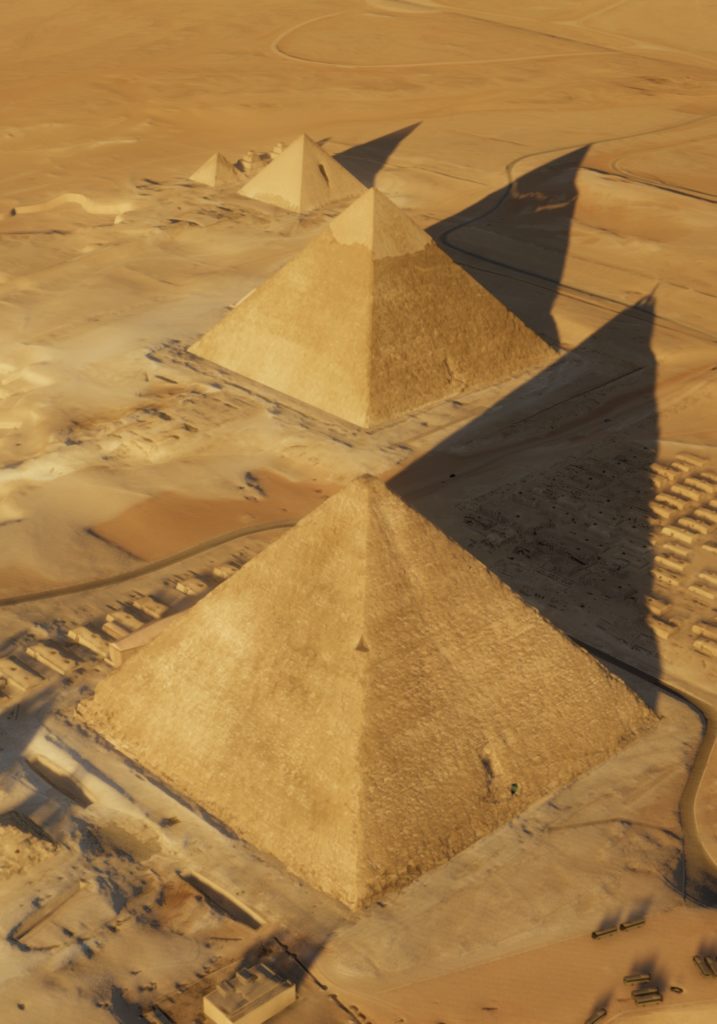 An aerial view of the Great Pyramids of Giza and the Khufu Pyramid up front. Photo by the ScanPyramids mission

Besides seeking concealed or lost spaces within monuments, muon detection–sometimes called muography–is used in many other fields today, said Daniel Whiteson, an experimental particle physicist at the University of California, Irvine.

“Muons are used to look inside shipping containers to hunt for radioactive, nuclear contraband or even dirty bombs,” said Whiteson, who did not contribute the ScanPyramids Project. “Muons are like X-rays. They both can help us see through different kinds of matter at different levels. And that’s important for cases that are not only difficult to enter but potentially dangerous too.”

More recently, physicists used muography when investigating the Fukushima nuclear plant after its meltdown in 2011. And similar muon detectors have been used to scan volcanos for any activity and other ancient structures such as cathedrals and Mexican and South American pyramids.

ScanPyramids researchers plan to keep scanning the chamber. They want experts from other disciplines, such as architecture, art, chemistry and more, to join them to non-invasively study Egypt’s pyramids.

Tayoubi said muography has only grown more innovative, and he hopes researchers can help this team understand how structures like the Khufu Pyramid were built.

Left: ScanPyramid’s 3D rendition of where the big void is located. Photo by the ScanPyramids mission

Over 100 arrested in Chicago during unrest following police shooting