How Environmentalists Lost Their Battle Against the Border Fence

Congress is considering building hundreds of miles of new fencing along the U.S.-Mexico border as part of immigration reform. During the last big fence-building push, the fight that centered on the fence’s potential effects on San Diego’s fragile border ecosystems. Video by Katie Euphrat/KPBS.

U.S. Border Patrol jeeps cruise the dirt roads that switchback up and down the hills along the border fence. One drags a contraption made of tires that combs the road, so agents can later detect fresh footprints.

Mike McCoy, a 71-year old veterinarian and long-time San Diego resident, looks out toward the coastline a few miles to the west. McCoy has spent more than half his life working to protect the estuary formed where the Tijuana River’s fresh water meets the salty Pacific Ocean.

“We’re going down toward Smuggler’s Gulch,” he said, walking west along the border fence. “This was probably the most difficult cut for them, and the most problematic cut for us.”

By “us” he means the environmentalists and local land managers who vigorously fought against the massive earth-moving project that filled in the deep gulch in 2009 and built a road across it — in the name of border security.

“Before it was going down these switchbacks,” McCoy said. “And that took a long time. This way they just fly right through.” 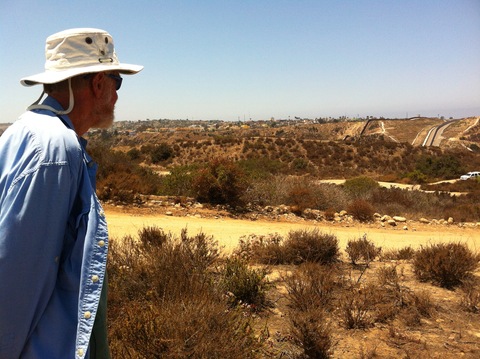 Mike McCoy, a long-time member of the advisory committee for the Tijuana River National Estuarine Research Reserve, worried that sedimentation from border fence construction would silt up the Tijuana River estuary. The estuarine reserve is one of 28 in the country set aside for conservation and research. Photo by Jill Replogle/Fronteras.

By “they” McCoy means Border Patrol agents scouting the area for illegal smuggling. Starting in the 1990s, this place became ground zero in the battle over how to secure the border against illegal immigration and drug trafficking.

Back then, hundreds of illegal crossers swarmed down the hills nightly from Tijuana. Then 9/11 happened, and concerns mounted about terrorists coming in through porous borders.

As a result, Congress ordered a fence built across 700 miles of the southern border — in addition to San Diego’s fortified triple fence that was already planned.

Opponents of the fence here had slowed construction down for years through public outcry and lawsuits.

In 2005, Congress passed the Real ID Act, giving the Department of Homeland Security the right to waive all legal requirements in order to expedite construction. f “And that removed a major tool of environmentalists and others opposed to the construction,” said Paul Ganster, director of the Institute for Regional Studies of the Californias at San Diego State University.

I just think that we could’ve done better with another approach, biologically and ecologically, than what we did with [Smuggler’s Gulch].
–Mike McCoy

“It really removed a lot of the requirements for an open process, for public hearings, things that citizens and communities and environmentalists fought for, really from the ’70s,” Ganster said.

“Deer and jaguar and Sonoran pronghorn,” McCoy said. Fences can block genetic exchange among these big animals, weakening the species. Since then, Homeland Security has waived close to 40 federal laws, and countless state laws, to build new sections of fence all across the U.S.-Mexico border — some of it across federally protected areas and habitat for endangered and threatened species.

The immigration reform bill that passed in June in the Senate orders 700 new miles of fence to be built along the southern border. 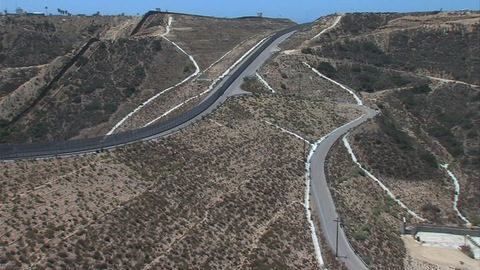 Four years after Smuggler’s Gulch was filled in, local land managers say sedimentation hasn’t been as bad as originally feared. But they still mourn the loss of habitat in the gulch. Photo by Katie Euphrat/KPBS.

Border Patrol refused to grant an interview for this story. But Shawn Moran, vice president of the Border Patrol agents union, said, in general, fencing is just a speed bump.

“The fence hasn’t really cut down on human smuggling because if you build a 20-foot fence, the smuggling organizations, they just build a 21-foot ladder and they get the people over it,” Moran said.

But Moran said the contentious San Diego fence was needed. Illegal traffic here has slowed to a trickle — it’s moved to Arizona and Texas.

Moran said adding hundreds of miles to the U.S.-Mexico border fence would probably help agents by funneling illegal traffic into areas they can control.

“It’s not the answer to border security, but it is a primary tool that the Border Patrol has to slow down things,” he said.

And he said he understands the need for a secure border.

“I just think that we could’ve done better with another approach, biologically and ecologically, than what we did with this approach,” McCoy said.

What really rankles McCoy is the supreme trump card held by one federal agency — the Department of Homeland Security.

“It’s kinda my-way-or-the-highway type thing,” McCoy said. “And that’s not the way America worked to me. We all had a say in what went forward.”

As this year’s debate over immigration and border security gets louder, environmental concerns are barely a whisper.

U.S. will allow limited flights by Chinese airlines, not a ban

WATCH: ‘Why was that necessary?’ Gov. Cuomo asks after man is shoved and hurt on video

Two-thirds of black Americans don’t trust the police to treat them equally. Most white Americans do.

WATCH LIVE: Answering your questions on race in the workplace