How Grandmothers Gave Us Longer Lives 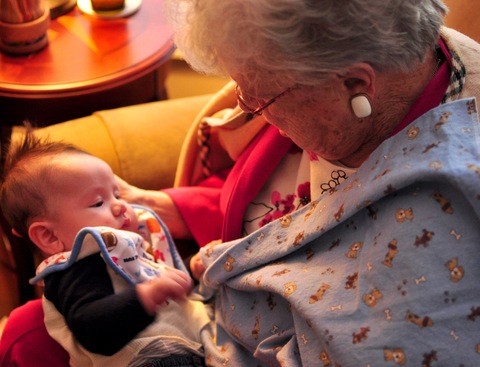 Humans may have developed our long life spans as a result of nature’s first babysitters: grandmothers. A new study published in the Proceedings of Royal Society B on Wednesday uses a mathematical model to determine how grandmothers can influence human longevity over the course of several generations, giving humans longer life spans than other primates.

This model revives a popular but often contested theory of human evolution known as the “grandmother hypothesis,” which was first proposed in 1998 by Kristen Hawkes, an anthropologist at the University of Utah and senior author of Wednesday’s study, and her colleague James O’Connell. The idea is that if grandmothers help feed and care for their grandchildren, mothers have more time and resources to devote to having another baby. And the more grandchildren she has, the greater chance grandma has of passing on the genes that allowed to her to live to such an old age, Hawkes said. This would also help explain why humans live long past their fertile years, something that is unique compared to other primates.


Hawkes thinks this new social cooperation and shifting life expectancy may have been the key to the evolution of humans from their australopithecine ancestors about four million years ago. And by caring for children other than their own, grandmothers may be the reason we became hyper-social, Hawkes said.

“So much of what makes us human may be a legacy of our ancestral grandmothers and ancestral babies,” Hawkes said. “Just the pressure that it puts on babies to be better at engaging their caretakers…if it started with grandmothering, then it carried along a bunch of other things that we need to explain our life history.”

Hawkes’ theory has been embraced by some anthropologists, but others claim that changes in diet, hunting or human brain size had a greater role to play in shaping our modern selves. One of the criticisms was the theory lacked mathematical evidence that grandmothers alone could influence human longevity. Studies in 2010 and 2011 from the Max Planck Institute for Evolutionary Anthropology concluded that there were not enough women living past menopause to affect the life span of their descendants.

To challenge that finding, lead author and mathematical biologist Peter Kim at the University of Sydney created a mathematical model to simulate how long it would take to change the life span from one similar to our great ape ancestors to present hunter-gatherer groups. He adjusted the simulation to make grandmothers at least 45 years old and less than 1 percent of the female adult population. The model also stipulated that grandmothers could care for any children 2 years or older, not just her daughters’ children.

Hawkes said the study did not include other factors such as brain size, hunting or pair bonding to show only the effect of grandmothering. In less than 60,000 years, human life expectancy doubled and the number of grandmothers in the population rose to more than 40 percent, similar to hunter-gatherer societies, Hawkes said.

“All it takes is just a tiny little bit of grandmothering, and if selection pressures are positive for that infrequency, then it increases,” she said.

Molly Fox, a Ph.D student at the University of Cambridge, also has published studies on the impact of grandmothers on evolution. She said previous models explained grandmothers’ role in children’s survival, but Hawkes’ model shows that grandma’s help allowed women to have more children, which meant more of her descendants could carry her longevity genes.

She added that grandmothers also pass on more than genes to help their grandchildren survive and evolve.

“We are a species heavily reliant on the ideas, knowledge and customs passed down between generations,” she said. “This may be an important aspect of the advantages a grandmother’s presence affords her family.”

But the new model still leaves a lot of questions unanswered, said Friederike Heinze, evolutionary biologist who worked on grandmothering models at the Max Planck Institute. Longer lives would have resulted in some reduced fertility, something she said the model doesn’t fully address. The new model tests only few of the trade-offs between longevity and fertility, and the results will be very sensitive to the nature of the trade-off, she added.

“There is no doubt that grandmothers are helpful in many societies, but still, this does not prove that they have been the driving force for evolving human longevity,” Heinze said in an email. “I think the work on this has just started — there is still much for us to do.”