How many synthetic genes does it take to sustain life?

How many genes does it take to survive and grow strong? 473..if you’re bacteria. Synthetic biologists based in California have nailed down the essential genes for life in a species of bacteria, Mycoplasma mycoides. Engineered by many of the same people who sequenced the human genome, this minimalist microbe may serve as the broth for cooking up the core functions of life.

For example, scientists have cataloged the genomes of thousands of species, yet despite this prior research, no one knows the functions for 31 percent of the genes needed to sustain life in this synthetic germ.

“I think we’re showing how complex life is, even in the simplest of organisms,” geneticist and study co-author Craig Venter said of the work published today in the journal Science. One open question is whether the essential, yet mysterious genes of this synthetic microbe can reveal why so much of human genome — 85 to 92 percent — has lacked a discernible function so far.

This landmark find has been 20 years in the making at the J. Craig Venter Institute, and its origins formed the basis for the human genome project. In 1995, scientists at this institute sequenced the first genome for a free-living organism, Haemophilus influenzae. Later that year, the institute would partner with Clyde A. Hutchison III, a microbiologist at the University of North Carolina at Chapel Hill, and publish the smallest genome ever found for a self-replicating organism. Its owner: the bacteria Mycoplasma genitalium. Everything to follow came from this diminutive collection of genetic code.

Venter, Hutchinson and their colleagues realized if they wanted to solve the basic questions of life, they would need to work with the most minimal genome.

“The only way to do that would be by trying to synthesize a genome, and that started our 20-year quest to do this,” Venter said. In other words, they would need to create synthetic life.

Mycoplasma provided the ideal starting ground, given these bacteria contain so few genes. In 2010, the institute announced that they had completed step one in this mission. The scientists had assembled nucleotides, the building blocks of DNA, into a working synthetic genome for Mycoplasma mycoides. Mycoplasma mycoides is a relative of bacterial species that launched this project, but it grows faster, which expedites this brand of work.

That’s important because creating synthetic life requires numerous rounds of trial-and-error. To start, they had to stitch together 1.07 million DNA base pairs — the railroad tracks of genomic code — inside of a test tube. Each rail is chemically added one by one, but there’s a margin of error. The team wanted to create a precise replica, so they had to repeat the process until a facsimile of the microbe’s natural genome emerged. Six years ago, they announced their initial success and named this synthetic genome Syn 1.0. They named this genome Syn 1.0. 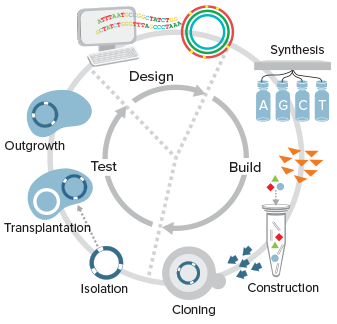 Steps in creating Syn 3.0. Major advances in DNA technologies have made it possible for biologists to now behave as software engineers and rewrite entire genomes to program new biological operating systems. Illustration and caption by J. Craig Venter Institute

Today, the researchers introduced Syn 3.0, which they created by introducing mutations, one by one, into 901 genes of Syn 1.0. Through multiple iterations, this process exposed which genes were truly essential for the survival of Mycoplasma mycoides. The team landed on 473 genes that maintained the cells replication.

Some genes initially thought of as non-essential, because of what’s known about their jobs in other species, turned out to perform the same critical function as a second gene. In other words, the cell could survive without one of these genes, but not without both of them.

“I love their approach; people can argue over scientific results about whether or not a gene is essential, but the synthesis of this genome draws a line in the sand, and shows unequivocally what is possible,” University of California Los Angeles biochemist Sriram Kosuri, who wasn’t involved in the research, told GENeS.

It’s worth emphasizing that Venter and his team didn’t create new life. In essence, they cut spokes from a bike wheel in order to see how many are required to keep rolling.

“[Syn 3.0] displayed substantial defects in growth and morphology that suggest it is extremely unlikely that such a cell would survive outside of the laboratory. Hence any potential risks associated with [Syn 3.0] are minimal,” Samuel Deutsch, head of DNA synthesis and Assembly at the U.S. Department of Energy Joint Genome Institute, told GENeS.

Also, the 473 genes that are essential for Mycoplasma mycoides are not likely to be the same crucial genes for human life — or even other species of bacteria.

Still, there’s something special about starting from scratch. Syn 3.0 offers a foundation for adding new genes and seeing what they do, and the applications could be widespread, if not a long way from fruition.

“Our long-term vision has been to design and build synthetic organisms on demand where you can add in specific functions and predict what the outcome is going to be,” said Daniel Gibson, vice president of DNA Technologies at Synthetic Genomics who partnered on the project. “So we believe that these cells would be very useful for many industrial applications, from medicine to biochemicals, biofuels, nutrition and agriculture.”

Left: Syn 3.0 bacterial cells magnified about 15,000 times by an electron microscope. This is the world’s first minimal bacterial cell. Its synthetic genome contains only 473 genes. Surprisingly, the functions of 149 of those genes are unknown. Photo by Tom Deerinck and Mark Ellisman of the National Center for Imaging and Microscopy Research at the University of California at San Diego