How much would you sacrifice to be the first person on Mars?

Michael McDonnell has climbed Mount Kilimanjaro. He has a physics degree. He’s worked in hazardous environments. He hopes these qualifications will convince a selection committee that he’s the perfect candidate for the first human voyage to Mars.

McDonnell is prepared to spend seven months in a space station the size of a small kitchen with three other people, no toilet and no shower. And he’s prepared to part ways with his wife, Michelle, despite one difficult detail about the trip: If chosen to go to Mars, he would never return. Ever.

But McDonnell recognizes the sacrifice he’s making. “There is that human factor. You can’t touch that person again,” he said earlier this week, with his wife still in orbit.

The privately-funded Mars One mission is the brainchild of Bas Lansdorp, a Dutch engineer who co-founded the project in 2011. The organization aims to land the first four-person team on the Red Planet, an honor that has for decades belonged to rovers. And even then, half of those unmanned missions have failed. 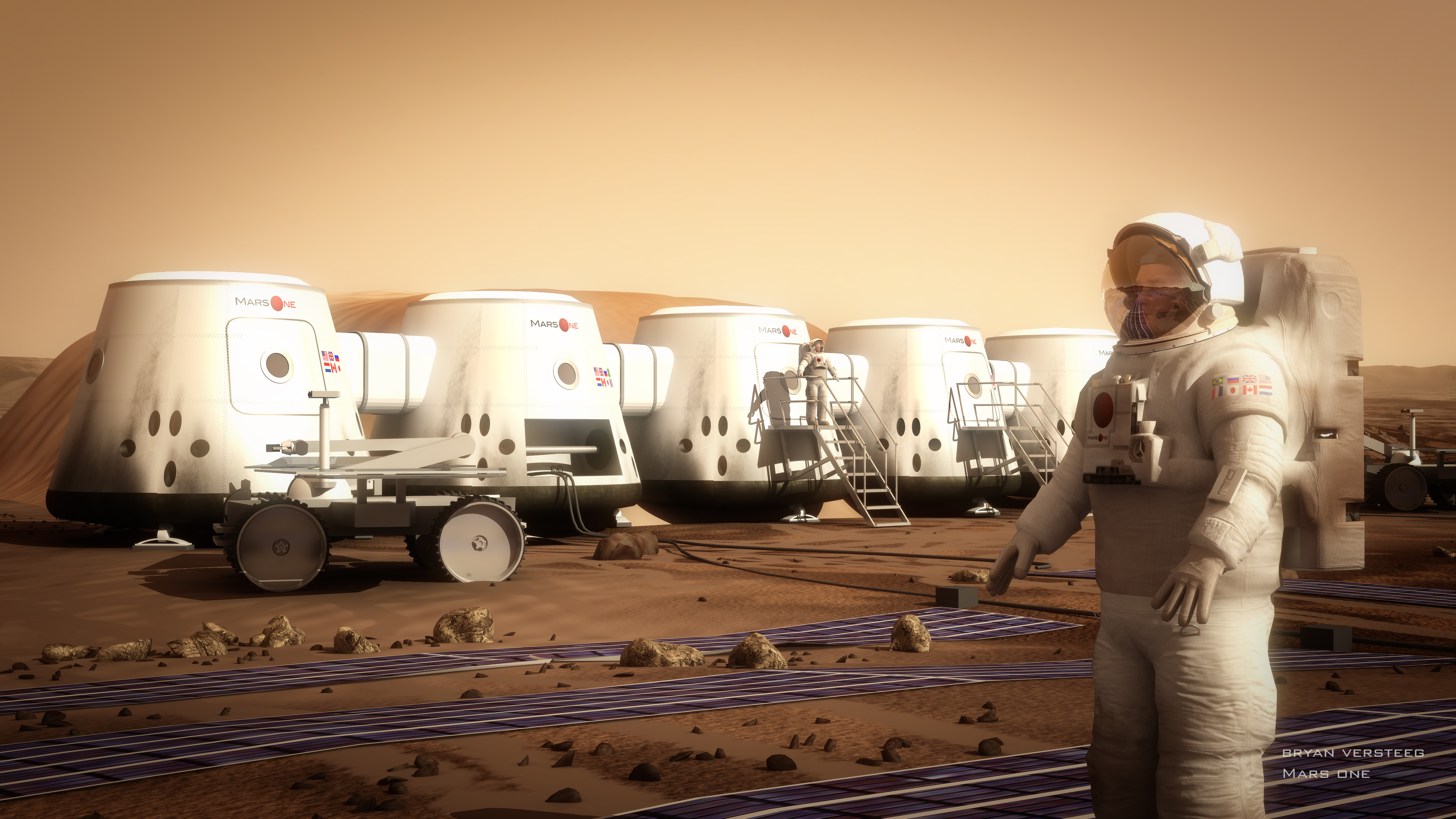 Mars One wants to establish the first human settlement on the Red Planet by 2025. Illustration by Bryan Versteeg via Mars One

Lansdorp said the goal isn’t to select the smartest people in the pool. A plumber has just as much chance as a university-trained engineer, he said.

But applicants must embrace the challenges involved in establishing humankind’s first foothold on Mars, including the drastically reduced provisions available to them. The organization’s website, for example, reminds readers that only so much storable Earth food can be transported before astronauts have to start incorporating algae and insects into their Mars diet.

What gets only brief mentions on the Mars One website are the many ways the mission might fail. Humans would need access to water, oxygen to grow food and building materials. Exposure to radiation in deep space could be harmful to the astronauts. Dust storms could interfere with solar panels designed to generate energy for the settlement’s life support systems.

There’s the psychological stress that long-term spaceflight inflicts. Plus, bone and muscle mass deteriorate in space, a difficult problem to solve. Current studies only grasp how weightlessness can affect an astronaut’s body after about six months. Anything longer is uncharted territory.

NASA, which has no partnership with the Mars One mission, has said that it won’t send any of its astronauts to Mars until the space agency is confident it can ensure their safe return to Earth. 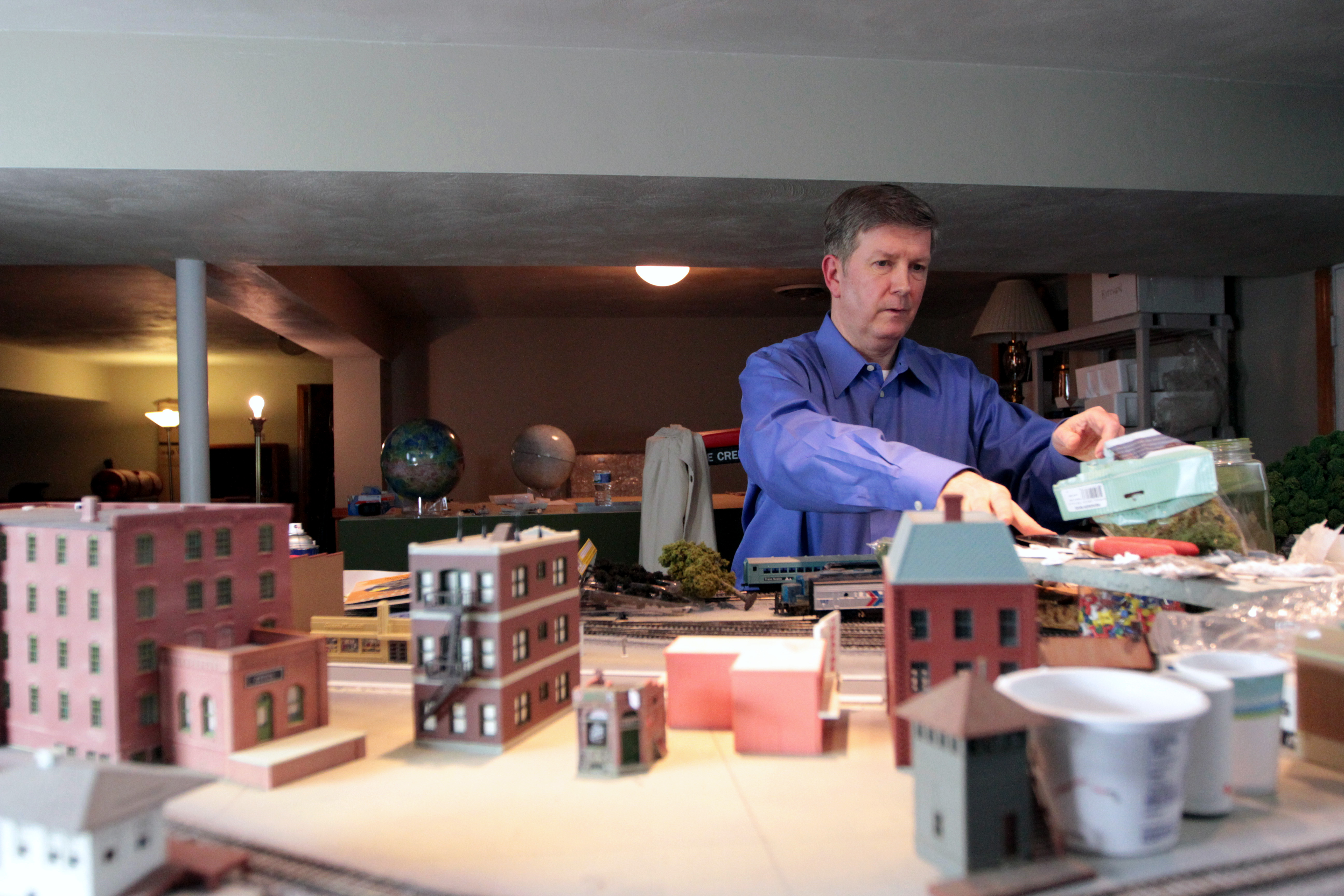 As a hobby, McDonnell works on his model railroad in the basement. Behind him are two globes of Venus and the moon, which he uses as reference maps for an online space exploration simulator. Photo by Eric Krupke/PBS NewsHour

In March, NASA astronaut Scott Kelly and Russian cosmonaut Mikhail Kornienko will embark on a yearlong mission on the International Space Station to help researchers better understand how humans can endure in a hostile extraterrestrial environment.

Lansdorp, however, has hammered home the fact that “Mars is home.” He tells skeptics that the crew’s lives will continue as they build a settlement on Martian soil.

“What Mars One is doing would never have been possible without all the things NASA has done,” he said. “We are building on the technologies that NASA has developed.”

This includes using the same third-party manufacturers like Lockheed Martin. The defense industry giant conducted a mission concept study for an unmanned lander whose design mirrors NASA’s 2007 Phoenix spacecraft. “The mission will provide proof of concept for some of the technologies that are important for a permanent human settlement on Mars,” the statement announcing the partnership said.

Another massive obstacle: Mars One has money — a lot of money — still to raise.

Mars One estimates that the first manned mission will cost $6 billion with each additional mission requiring another $4 billion. NASA’s estimates are much more daunting: as much as $100 billion over 20 years.

Mars One hopes to offset the costs through a reality television show that follows the final candidates through their training and preparation for launch.

“There’s a lot of people who say we can’t do it, that it’s impossible,” Lansdorp said. “[But] they all hope that we will succeed. And that’s one of the big strengths of Mars One.”

For now, the top 100 candidates will be divided into 25 teams of four and enter a training phase. Physically and mentally healthy applicants will be judged on their ability to learn critical skills. These include treating minor medical problems, extracting water from soil, operating unfamiliar equipment, and producing their own crops to prepare for growing food on the rocky, barren Mars wasteland. 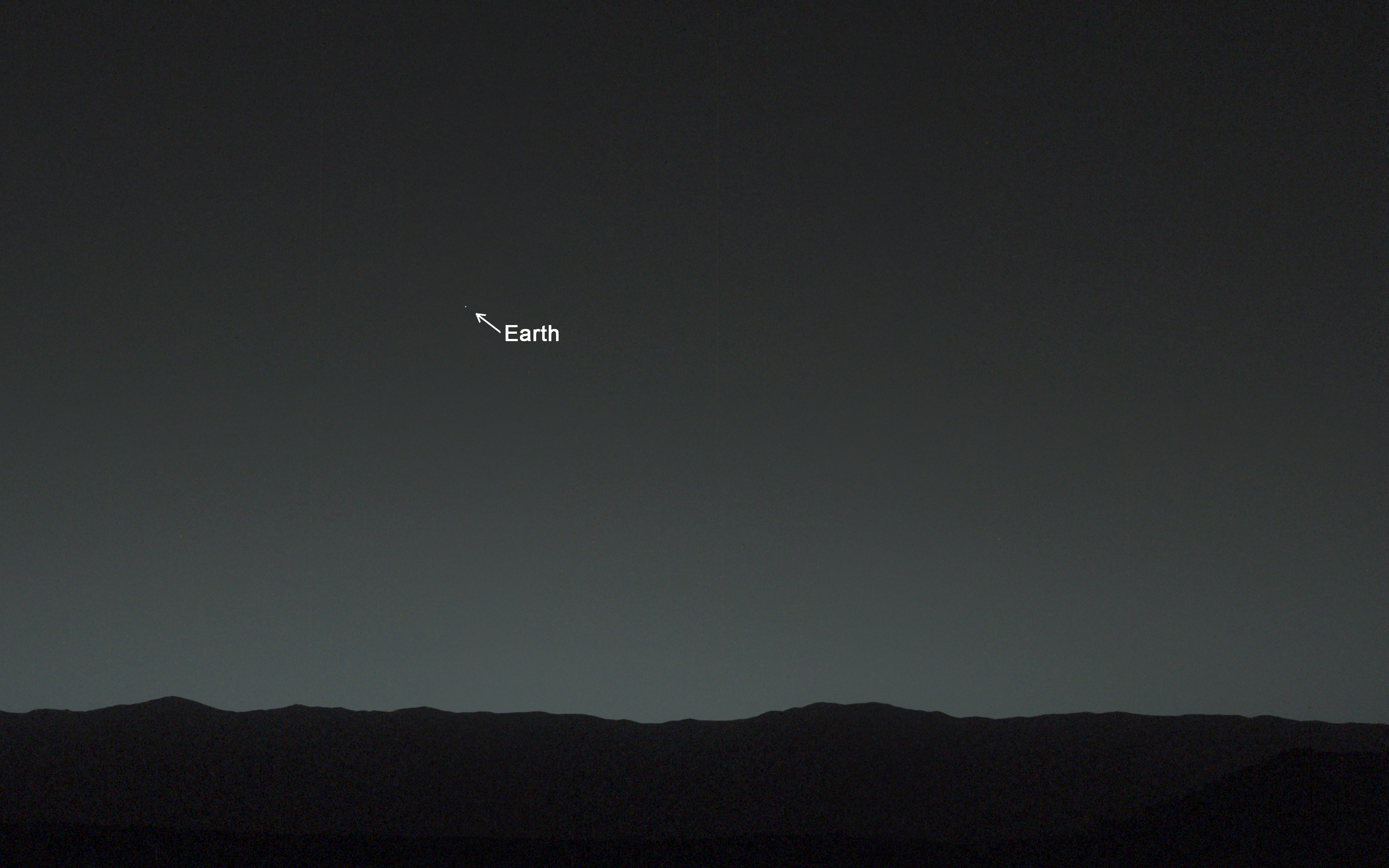 NASA’s Curiosity Mars rover captured this image of the Martian horizon 80 minutes after sunset. Earth, the brightest object seen in the twilight sky, is annotated. Image courtesy of NASA/JPL-Caltech/MSSS/TAMU

At least six groups of four will train for eight years on Earth, testing the teams’ capacity for extreme isolation, among other conditions, in cramped quarters.

According to Mars One’s website, the first team will “organize themselves politically” as they gradually travel out of earshot of mission control. Then, following the first launch, the plan calls for another group of four to make the 225-million-mile trek across space every two years to expand the human settlement on Mars.

Despite the organization’s astronomical goals, Dr. Norbert Kraft, the chief medical officer for Mars One, acted as the consummate HR representative perusing online job applications. Anyone who didn’t treat the process professionally was automatically disqualified.

“You don’t go to an interview in pajamas,” Kraft said. One guy was naked in his video submission. Several others laid in bed.

“We put all kinds of things in the application process that made it hard, a lot of work, and annoying,” Lansdorp said, “so that we only had to look at the ones who were really motivated to finish their profile.”

Kraft, who has worked for several international space agencies, including NASA, was the man tasked with sifting through the applications. Kraft said it was relatively easy to weed out the applicants who didn’t take it seriously. Some didn’t fully answer the questions; others thought the mission was aiming for the moon.

Mars One also requested a physical. The organization didn’t want to take the risk of sending a person with high blood pressure or a body mass index greater than 30 to Mars. 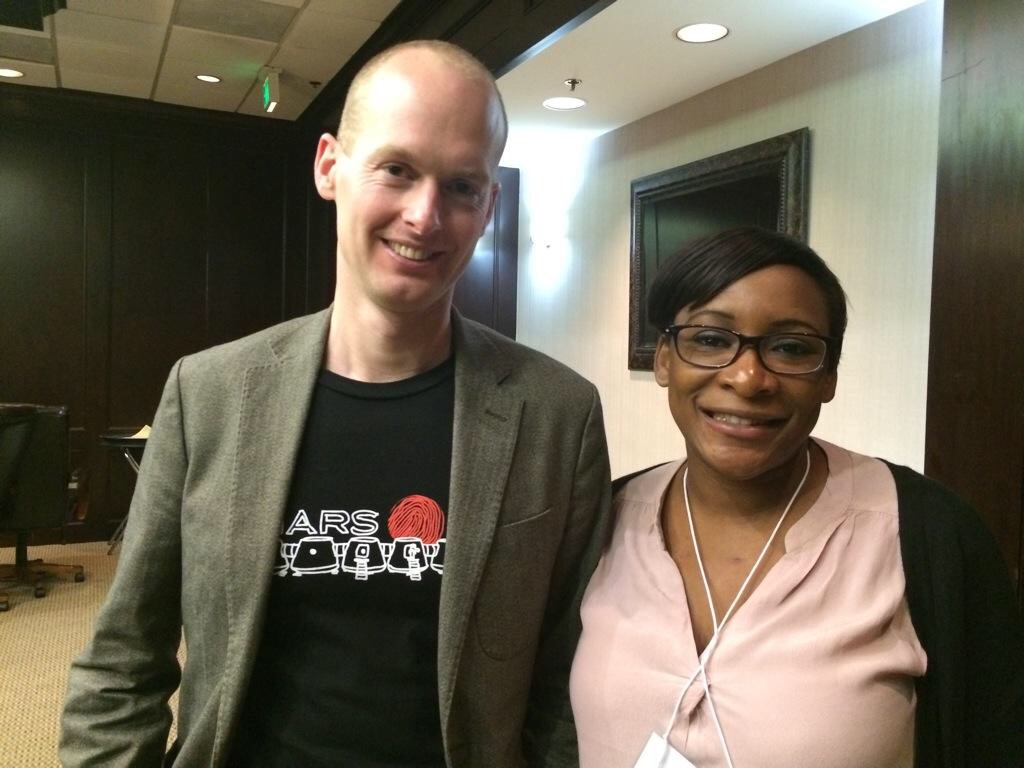 Kenya Armbrister, a 36-year-old California native and traveler, who has devoted her life to social causes in faraway places, also made the latest cut.

Armbrister said she’s lived out of a suitcase all her life. And, with no children, Mars not only satisfies her wanderlust, but also represents to her a clean slate for humanity, a sentiment shared with Lansdorp.

“The real solution is not trying to establish world peace and not trying to fight world hunger,” he said. “It’s doing something that can inspire us to think differently, to think big and to cooperate.”

Armbrister found out she was a finalist Friday morning at work.

“I closed my office door and had a freak out,” she said. “There were some tears, some excitement and some trembling. It was exciting news.”

More than anything, Armbrister said she wants to plant the first seeds in a Martian garden, a Herculean task that requires the team to grow food on a planet with a protective atmospheric layer that’s one percent the thickness of Earth’s. The radioactive exposure could prove detrimental to the plants and the humans, if not properly shielded. The carbon dioxide-rich atmosphere is also unfit for human lungs. 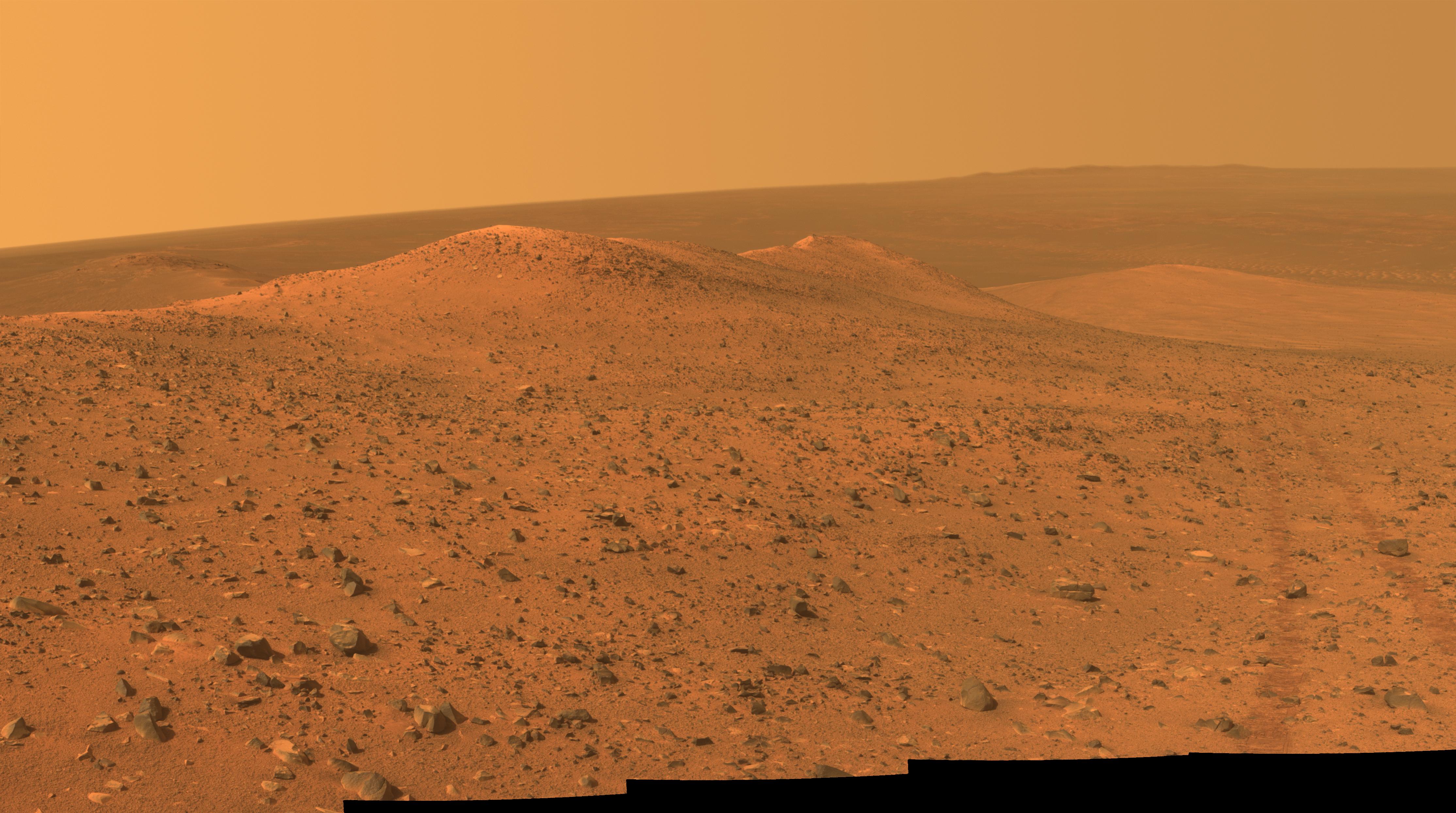 NASA’s Opportunity Mars rover captured this mosaic of the dusty Martian landscape, with its tracks visible to the right. Image courtesy of NASA/JPL-Caltech/Cornell Univ./Arizona State Univ.

McDonnell waited until after work on Friday to open his email from Mars One. He wanted to be sure Michelle was present.

I braced myself for disappointment,” he said in an email. But then he saw the first words of the email: “Congratulations … You are one step closer to launching the dawn of a new era — human life on Mars.”

“It hasn’t fully sunk in,” McDonnell said, “I’m really nervous about what’s coming. I’m anticipating the challenges ahead, whether they be mental or physical.”

Lansdorp, for his part, will remain Earthbound. On top of not wanting to leave his 1-year-old son, Lansdorp said he is “completely unqualified” to be on the first couple of missions.

“I’m a real entrepreneur, so I have some of the good entrepreneurial qualities like impatience and stubbornness,” which are good for business, but wouldn’t make an ideal candidate for Mars, he said.

Left: Michael McDonnell and his wife adorned their refrigerator with magnets from various cities around the world and an extraterrestrial reminder of Michaels dream to join a one-way mission to Mars. Photo by Eric Krupke/NewsHour