How the tax code overhaul could slam higher ed

The tax code overhaul pending in Congress is littered with provisions that would make it a lot harder for most Americans to go to college or grad school.

All told, the changes proposed by House Republicans would require Americans to spend US$65 billion more to get a higher education in 2027 versus 2018 by increasing costs for both students and universities, according to a projection by the American Council on Education, a trade group that represents colleges and universities, which based its forecast on the House’s own report.

Many of the details and provisions will change as the House and Senate seek compromises on this legislation, which is a top priority for President Donald Trump.

But as an expert on how tax policy affects education and nonprofits, I am concerned that any version of the proposed tax code changes would undercut higher education, which is increasingly essential for workers looking for good jobs.

Even if there are a lot of moving pieces, it’s still useful at this stage to zero in on what some of the proposals, including the ones I describe here, would do.

The latest version of the tax bill contains many provisions that would drive up higher education costs for students.

The same provision that would hammer graduate students would impose new costs on some faculty members as well – or their children.

For example, Republicans want to end the tax deductibility of education, which currently allows students and parents with matriculating dependents to deduct up to $2,500 in student loan interest on their tax forms. In 2015, 12.2 million taxpayers took the deduction, which phases out at higher incomes.

A separate provision would impose new and heavy financial burdens on students who spend more than five years at colleges and universities, especially those pursuing a Ph.D.

It would do that by treating waived tuition payments for school employees and educational assistance provided by any employer as taxable income. Schools routinely waive the cost of tuition or provide other aid so they can recruit highly skilled employees who might earn more in private sector jobs. This is also common way grad students are able to afford their education.

Treating the value of these benefits, which can far exceed the student’s income, as taxable income may double, triple or even quadruple their tax bills, partly because it would push them into much higher tax brackets.

This change, in other words, would put the cost of graduate degrees out of reach for many Americans.

So I broke down my tax bill under Trump's "Cut Cut Cut" proposal.

My taxes won't be cut. My tax bill will quadruple.

The bill also combines multiple tax credits available for education into a single credit that is much less generous because it would not be available after the fifth year of higher education, unlike its precursors. Also, certain tuition payments would no longer be tax-deductible, and Americans would no longer be able to use U.S. savings bond interest tax-free to pay for higher education.

On the positive side, it would remain possible for students to have their debts forgiven without any tax consequences under some circumstances, such as prolonged public service careers. And for the first time, all student loans would be taken off the books when the borrower dies or becomes completely disabled.

If that provision goes forward, at least student loans would no longer follow you to the grave – as is the case now for many private lenders. (Federal loans already are discharged upon death.) 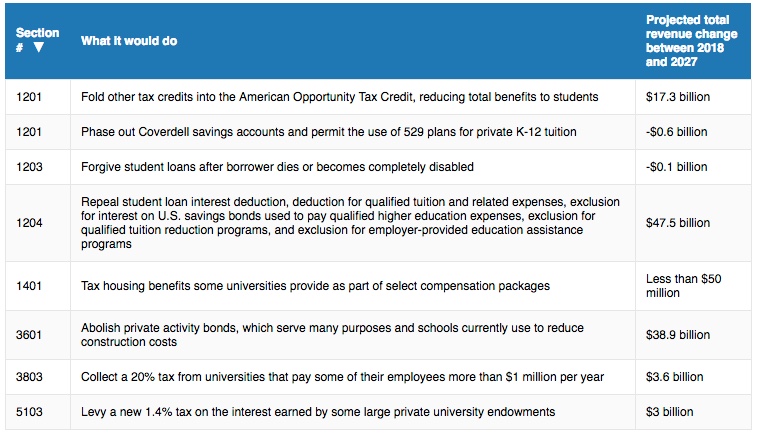 Education-related tax code changes. The proposed tax overhaul would have many repercussions for higher ed. Here are some examples of the specific provisions, what they would do and what would happen with projected revenue. Data by House Ways and Means Committee. Chart by The Conversation

The same provision that would hammer graduate students would impose new costs on some faculty members as well – or their children.

As a perk to recruit and retain employees, many schools such as the University of Chicago cover at least part of the cost of tuition payments for the dependent children of faculty and staff.

The bill would treat that benefit as taxable income.

Other provisions would affect university leaders. Many presidents and other staff in areas with high housing costs currently get free accommodations as an untaxed part of their compensation. The tax bill would restrict the multiple ways schools provide this perk by treating it as taxable income.

And the schools would have to pay a new 20 percent tax on compensation in excess of $1 million to their five highest-paid employees. This measure is likely to put downward pressure on pay for university presidents, medical and law school deans and football and basketball coaches, who are typically the highest-paid staffers.

While this could be a welcome change for those who believe that executive compensation at universities has become excessive, it could also lead universities to hire less prominent leaders.

More than half of all colleges and universities have endowments – essentially pools of money raised from their alumni, companies and other donors – that they invest in stocks, bonds and other assets. These funds help foot the bill for scholarships, salaries, construction and any other expenses.

Until now, higher ed endowments have operated like tax-exempt nonprofits. Contributions to them are deductible for donors, and they do not pay taxes on their earnings. This bill would change that for some schools, by requiring a few dozen elite schools to pay a 1.4 percent tax on their investment income.

The government would levy this new tax only on private colleges and universities with more than 500 students and at least $250,000 per student saved up in their endowment. The original proposal set that benchmark at $100,000.

Well endowed.
The value of all endowments at U.S. colleges and universities has surged in recent years, while the 120 biggest make up the lion’s share, based on data reported at the end of their fiscal years. Data by National Center for Education Statistics. Chart by The Conversation

What’s more, universities are worried that the proposed tax changes would reduce the amount of money donors give during their lifetime and leave as bequests from their estates in their wills. That is because this bill would reduce two important charitable giving incentives.

First, it would abolish the estate tax, which currently applies only to the inheritances left by one out of 500 people who die each year. Second, it would double the standard deduction.

Philanthropy experts predict that the second change would slash the share of taxpayers who itemize their returns and are eligible to benefit from charitable deductions from 30 percent of all taxpayers to 5 percent.

And a provision in the House bill would cut into the revenue colleges and universities earn from their sports programs. Currently, taxpayers may deduct up to 80 percent of what they spend to attend football games and other college sports events. The proposed bill would put an end that.

Separately, the bill would change the tax-free savings options available to families.

Currently, taxpayers may deduct up to 80 percent of what they spend to attend football games and other college sports events. The proposed bill would put an end that.

It would phase out Coverdell Savings Accounts, which exempt the gains from qualified savings for higher education from taxation.

At the same time, it would let parents use up to $10,000 per year from 529 plans, which offer different tax advantages, to pay for their children to attend K-12 private schools.

Interestingly, the tax bill would also allow contributions to 529 tuition-savings plans on behalf of fetuses, setting a precedent for supporters of “personhood” laws who see them as a step toward outlawing abortion.

It’s important to remember that the estimated $65 billion increase in tuition costs would follow years of the rising cost of higher ed outpacing inflation.

Yet the House Ways and Means Committee, which writes tax legislation, is defending the proposed changes. It denies that they would augment the sticker shock that comes with higher ed.

Instead, the committee says the overhaul would merely “streamline higher education benefits to help families save for and better afford college tuition and other education expenses.”

But I find it hard to foresee any outcome other than an increase in unaffordabability at a time when Americans owe more than $1.4 trillion in student loan debt.

Ted Afield is an associate clinical professor and director of the Philip C. Cook Low-Income Taxpayer Clinic at Georgia State University. This article was originally published on The Conversation. Read the original article.

Above: The proposed tax bill could make higher ed even less affordable. Photo by xy/via Adobe