How the transgender community finds a voice through speech therapy

“After [my family] found out I was transgender, and I started presenting as the person I am, I wanted them to feel comfortable around me in public situations,” she said.

It also allowed her to feel more at ease in a highly visible job as division chief for her county’s parks and natural resources department.

Some are also motivated by fear of being “outed as transgender,” Temmermand said. A report by the National Coalition of Anti-Violence Programs showed that hate-motivated violence against the transgender community rose 13 percent from 2013 to 2014.

“The less clues you can give people, the better — the safer you are,” Temmermand said.

Brianna Stryker is several weeks into her speech therapy at the same clinic.

“For me, it’s less about the fear and more about being able to pass as a woman,” Stryker said.

The Speech & Hearing Center at George Washington University in Washington D.C. specializes in female-to-male and male-to-female voice transition. How do you train a voice to align with a gender that is different from the one you were assigned at birth?

“We really try to walk a fine line between reinforcing stereotypes of male and female and finding a person’s genuine and authentic presentation of their gender,” said GWU speech pathologist Adrienne Hancock. “I might hear a voice and think of it as very feminine. They might think of it as a moderately feminine voice, so we try to avoid thinking [in terms of] your ‘male voice’ and your ‘female voice.’”

It’s kind of like cooking, Hancock added. Finding the most authentic voice for each person requires experimenting with speech patterns, breathing and sometimes, hormone therapy.

“What we do is find the right recipe for each person.”

Stocking a voice
Hormone treatment is often a start, but it works more effectively for trans men. Testosterone treatment can ultimately lower the voice. But how, exactly?

The human voice box is a muscular organ in the throat, also known as the larynx. It allows us to swallow, breathe and produce sounds. Within the larynx are vocal folds or cords, which vibrate when air passes through them. Thanks to these folds, people can talk. They can sing. And embedded in the vocal folds are testosterone receptors. 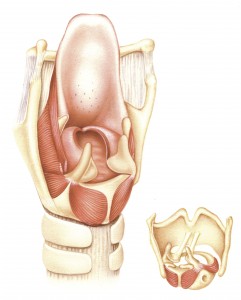 A view from behind the throat of the larynx and vocal cords. Bone, muscles (red) and cartilages are highlighted. Photo By BSIP/UIG via Getty Images

Receptors are protein molecules that interact with specific chemical signals, like hormones. When the receptors receive the testosterone hormone, the muscles in those folds bulk up and lengthen, lowering the voice.

“We have a harder time getting the voice we need, so it’s very stressful getting those muscles to work Temmermand said.

She visited the clinic once a week for 2.5 years and worked on daily exercises. To loosen the vocal cords, she massaged the muscles that hold the larynx in place by accessing them from underneath her chin. She worked on speech patterns and intonation patterns. She did breathing exercises to relax the neck muscles. And since a masculine voice is typically more monotone than a feminine voice, she worked on developing more dynamic vocal patterns.

Access is a major barrier to transgender speech therapy. It can be costly and difficult to find.

“Most transgender people don’t live anywhere near a clinic or have anything that they can reach every week, “ said Temmermand. “And insurance doesn’t pay for it. It’s out of pocket. It’s very expensive.”

Despite this, more people undergoing gender transition are looking for speech therapy at GWU’s transgender voice clinic, including younger people. “When I started 10 years ago, they were all middle-aged,” GWU voice disorder specialist Linda Siegfriedt said. “Then I started getting [people in their] 30s and 40s. And in the last year in a half, I’m getting more 13- to 16-year-olds”.

“They’re coming in with their parents,” Siegfriedt said of the teenagers. “They’re these incredible parents who, all they care about is that their child is safe. And this child is going through this massive transformation. The parents have to get their head around it and explore that with the child and get them to the places that serve their needs.”

Left: Voice therapists at a Washington D.C. clinic explain the science behind training a voice to align with a gender that is different than the one assigned at birth. Photo by CaiaImage/via Getty Images