The Science of Surviving a Chemical Weapons Attack 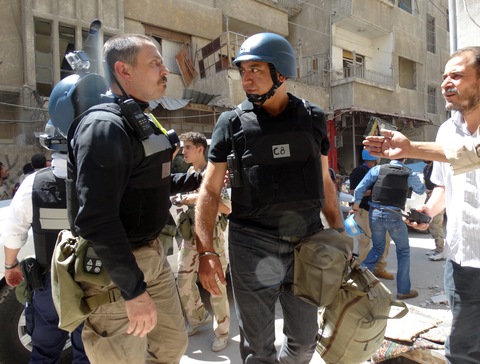 United Nations arms experts arrive to inspect a site suspected of being hit by a deadly chemical weapons attack last week on the northeastern outskirts of Damascus. Photo by Mohamed Abdullah/AFP/Getty Images.

The deadly nerve gas Sarin is believed to be behind the poison gas attack that killed more than 1,400 people in the Syrian suburbs of Damascus on August 21, according to Secretary of State John Kerry on Sunday. And the horribly potency of the gas has raised questions about what it would take to arm the public against a future chemical weapons attack.

To answer the question requires an understanding how Sarin and other nerve agents in its class work.

Sarin, a clear, odorless, tasteless nerve gas, was developed in Nazi Germany in 1938, originally for use as a pesticide, though it was produced and stockpiled as a weapon by American operatives after the war. Also known as GB, it’s thought to have been deployed during the Iran-Iraq War in the 1980s, and it was released by the Aum Shinrikyo religious cult on five Tokyo subway trains in 1995. Its chemical structure is similar to that of organophosphates, a common class of insecticides, which contain carbon-based groups coupled to a phosphorous atom. And it is believed to work on the body in the same way that the pesticides act on the bugs – or on agricultural workers who are exposed to too much of the stuff.

Except Sarin is immensely more powerful. A dab the size of a pea is enough to cause death, according to Pete Estacio, a physician and chemist who works with Lawrence Livermore National Laboratory’s Forensics Science Center.

Sarin and other nerve gases work to disrupt bodily functions by blocking the brain’s ability to control muscle movement. For a muscle to contract, the brain must send that muscle a message in the form of electrical pulses across a system of nerves. Passing from one nerve to the next requires a neurotransmitter called acetylcholine, which is naturally produced by the body. But as soon as this chemical does its job, it must immediately get broken down, or the muscles will contract uncontrollably.

“The bigger the dose you’re exposed to, the more quickly you need early intervention,” Estacio said. “You’ve got 15 minutes to be treated, and if exposed to a large dose, you’re done for.”

But here’s where the nerve agents come in. Sarin gums up that process by binding to the exact same dock as the acetylcholinesterase, blocking the enzyme from doing its job.

“It that’s messed up, that messes everything up,” said Carlos Fraga, a chemist with the Pacific Northwest National Laboratory. “If you’re not able to destroy acetylcholine, it just builds up and causes the nerves to keep firing.” Delivery of the chemical message without interruption by the enzyme leads to overstimulation, Estacio added.

The result is the terrible symptoms seen in the recent attack in Syria. Pupils narrow to the size of pinpoints. People experience sudden nausea, diarrhea, vomiting, seizures, muscle spasms, excessive runny nose and most dangerously, difficulty breathing – ultimately the main cause of death, Fraga said.

The good news is that there’s a suite of antidotes that can counter these effects. A drug called atropine blocks the acetylcholine receptor, reversing the immediate effects of the nerve agent. Another drug called 2-PAM breaks the chemical bond between the acetylcholine molecule and the nerve agent, preventing the poison gas molecules from binding irreversibly to the nerve cells — a process known as “aging.”

But here’s the problem: to work, these drugs must be administered immediately – within minutes.

“The bigger the dose you’re exposed to, the more quickly you need early intervention,” Estacio said. “You’ve got 15 minutes to be treated, and if exposed to a large dose, you’re done for.”

Bottom line: you have to be prepared for a chemical attack in order for the treatment to work.

“You have to have it on you,” Fraga said. “When you start seeing symptoms, you’ve got minutes. You have to know that you’re in that situation.”

Meanwhile, a team of about 30 researchers led by the Lawrence Livermore National Laboratory is working to develop material for a new “smart” military uniform that could transform its structure to repel chemical agents. The carbon nanotube-based material is only three times the thickness of a piece of Xerox paper and designed to be breathable in hot weather. When it encounters a nerve agent like Sarin or VX, polymers embedded into the fabric would rapidly react with the poison gas molecules to seal the material shut, providing instant protection. These polymers would also be designed to destroy and shed the uniform’s contaminated surface layer like snakeskin. 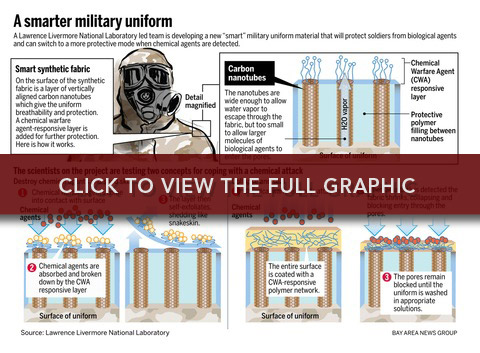 Click on the image to see the full version. Graphic by Jeff Durham/Bay Area News Group.

Existing protective gear is effective — gas masks can also prevent people from inhaling toxic chemicals, for example. But the military uniforms used now are known for being thick with poor breathability, and can cause heatstroke if worn too long in hot weather.

“We’re hoping to design a material that protects the general population of warfare agents, instead of a material that’s agent specific,” said Kuang Jen Wu, a physicist and researcher with the biosecurity and nanosciences group at Lawrence Livermore. “We want to start developing materials that could be eventually made available to the general public.”

Rebecca Jacobson contributed to this report.