How to turn cicada season 2021 into a science project

This year, the warmth of spring is an invitation for more than one species to emerge from long-term isolation. In parts of 15 Midwestern and East Coast states, cicada season is on its way.

This won’t be your average summer night, buzzing gently with the sound of cicada species that show up every year. 2021 will mark the emergence of “Brood X,” a group that’s made up of three species of “periodical” cicadas that come out only once every 17 years.

North America is home to a total of seven cicada species that, unlike their annual counterparts, leave their underground burrows in either 13 or 17 year cycles when the soil temperature reaches around 64 degrees. Once that happens, these insects simultaneously emerge by the billions to kick off the adult chapter of their life cycle.

“They all want to be at the party at the same time,” said Eric Day, who manages the Insect Identification Lab at Virginia Tech’s Department of Entomology.

Guests will start arriving at this year’s party at different intervals depending on the state. People who live farther south can expect to witness the proliferation of the red-eyed cicadas starting in early May, whereas residents of more northern parts of the country may have to wait a few weeks.

While many may rue the swinging (and singing and squirming) soiree, insect enthusiasts will have plenty of opportunity to make the most out of this relatively rare event. People in Brood X territory will have a “front row seat” to a kind of ecological show that doesn’t exist anywhere else in the world, Day said. “It’s just kind of this amazing biological phenomenon happening right in their backyards.” 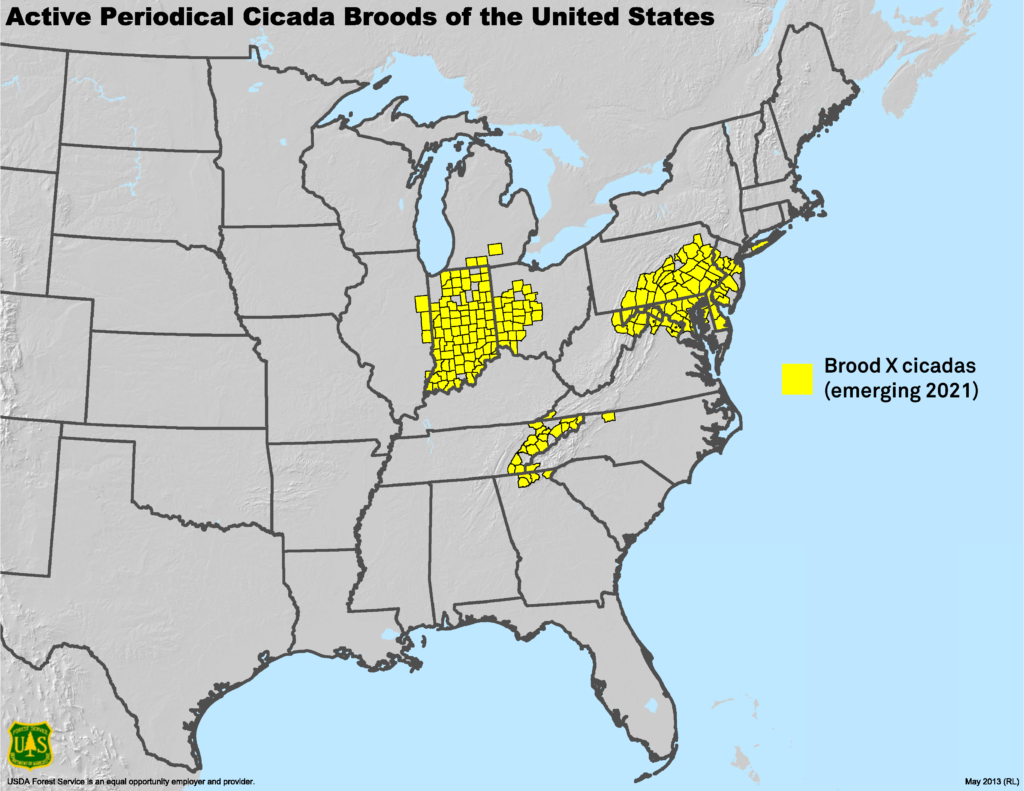 Whether you have vivid memories of the last time periodical cicadas emerged en masse or this year will mark your first encounter with these bugs, here are some tips for turning the arrival of Brood X into an at-home science, art or even cooking project.

Scout cicadas before they emerge

If you live in one of the states that can expect to see this year’s emergence and have yet to see or hear a periodical cicada, investigate the bases of trees in your neighborhood, or a local park or nature preserve. Day noted that these insects tend to gravitate toward deciduous trees like oaks or hickories, so start with those first.

You may see holes in the ground that are about a half inch in diameter — some might stick out forming what’s called a cicada chimney. Those mark where the nymphs of this year’s brood will emerge after they burrowed into the soil nearly two decades ago.

“Sometimes you might even see the cicada nymphs inside there looking back at you [and] getting ready to come out,” Day said.

When the temperature is right, those nymphs will leave their holes and make their way back to the bark of the nearby tree to shed their skin, a kind of sheddable exoskeleton known as an exuvia. In their soft, whitish post-shedding form, the cicadas will wait for their new adult skin to harden and darken to their signature black. The cicadas are highly vulnerable during time (it usually takes 30 minutes to an hour), and should be avoided to make sure they survive the process.

Be a bug tracker

Under optimal conditions, there may be as many as 1.5 million cicadas on a single acre of land. How concentrated their populations depends largely on how developed the local area is. These insects can and will emerge in urban, suburban and rural places alike.

Scientists are interested in tracking where cicadas are, said Jessica Ware, assistant curator in the department of invertebrate zoology at the American Museum of Natural History, as well as whether any local populations have gone extinct in the past 17 years.

If you come across emergence holes, abandoned exubia or real live cicadas, keep track of when you spotted them and where. What species of tree were they on or near? Did you spot nymphs shedding their exuviae, or adults? How many did you see?

“Those are things that kids can make observations about,” Ware said.

You can also keep track of when you first hear the cicada call, or if you see evidence of “flagging” later on this season. That happens when female cicadas lay their eggs in small cuts they carve in tree branches, which can cause the green leaves on those branches to turn brown and die. This process isn’t generally too harmful for a tree, unless it’s very young or weak.

“Those eggs are in the twigs until about July, and then they hatch and the [cicada nymph] at that point falls to the ground [and burrows] in the soil, and there it is for the next 17 years,” Day said.

Hold on to the information you gather and refer back to it next time the brood emerges so you can compare observations. 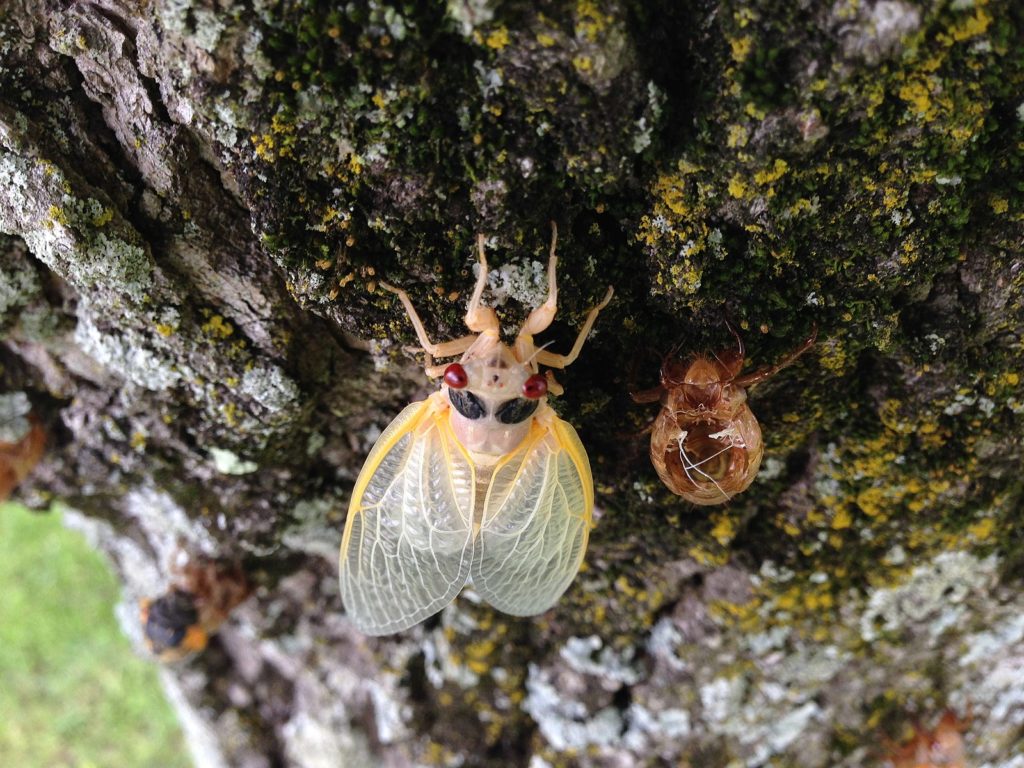 An adult periodical cicada waits for its new exoskeleton to harden after emerging from its exuvia, pictured right. Over the course of about an hour, it will darken to its signature black color. Photo by dankeck via Wikimedia Commons.

If you’re interested in helping out professional entomologists, consider downloading an app called Cicada Safari that allows you to take photos of cicadas and upload them to a live map. That’s helpful for researchers who track where cicadas emerge and where certain populations may have gone extinct.

Keep an ear out for different cicada songs

Male cicadas use small organs called tymbals located on either side of their abdomen to create their signature song. The males of each of the three species that make up Brood X sing songs that differ slightly in terms of their duration and pattern. Females listen for the sound that’s unique to their species in their search for a mate.

The songs also serve as a way for those females to assess the quality of the males they have to choose from to ensure that “their progeny will be the most fit for the next generation,” Ware said.

If you listen closely, you might be able to detect subtle differences in the three distinct tones.

Soil temperature in @ArlingtonVA holding at 63F. 17 year #cicadas emerging now in the shade of my magnolia tree. pic.twitter.com/WOYixZuQrG

One of the species that will emerge with Brood X is known as Magicicada septendecim, or the Pharaoh cicada. Day noted that it might be harder to distinguish their sound by listening to just one or two of these insects, but a large number of them creates a chorus with a distinct song.

“When you get thousands and maybe millions — depending where you’re at — singing together… it sounds like someone saying ‘pharaoh, pharaoh, pharaoh’ over and over again,” Day said. He added that to him, the sound also resembles distant sirens.

The two other species in Brood X, Day said, make “more of a rapid chirp noise.” Check out the website Cicada Mania to listen through recordings of the songs generated by different species.

Given that these bugs emerge by the millions, don’t be alarmed if you see local wildlife — or even your dog — dining on the abundance before them. Cicadas are completely safe to eat, and you too can get in on the feast. But refrain from snacking if you have a shellfish allergy — cicadas and shrimp are distantly related, both being arthropods. Cicada Mania also warns that mercury can bioaccumulate in cicadas, so maybe don’t eat them three meals a day.

Ware, who’s tried cicadas in the past, said she thought they had a kind of nutty taste. Day added that they tend to pick up the flavor of whatever you cook them in.

Don’t worry about harming the broader periodical cicada population if you do decide to collect a few for dinner, or if you’re observing a lot of animals eating them. Part of the strategy of emerging by the millions is to make sure there are plenty of cicadas available to pass their genes onto the next generation, even if quite a few of them are eaten or die of natural causes along the way.

If you’re not into the idea of cooking up cicadas, consider turning them into an art project.

“You could do all sorts of neat things with cicada wings,” which are intricately patterned with slightly raised veins, said Ware, the proud owner of a pair of cicada wing earrings.

If you want to get creative with cicada wings, you can gently pull them off of cicada carcasses toward the end of their season, when the adults have died off after serving their reproductive purpose. You can preserve them in resin, or put them under paper and color over them with a crayon to reveal their unique pattern on the page.

However you decide to approach this year’s cicada emergence, think of it as a moment in history. Day described the periodical events as a kind of “memory tool,” adding that “people like to remember where they were when they first saw them emerge.”

Brood X offers the unique opportunity to look back to 2004 — when the last generation of this brood left their burrows for mating season — and think about how much has changed since then. And imagine what you’ll remember about this truly remarkable time 17 years from now.

Left: A mature cicada dries its wings on a tree branch in Great Falls, Virginia, May 29, 2004, the last time members of the Brood X group of 17-year cicadas emerged. Hyungwon Kang/Reuters