Why is your Uber or Lyft stuck in traffic? Most likely because of Uber and Lyft

Stuck in traffic? You might blame the ride-hailing app on your phone.

Tech companies like Uber and Lyft may be responsible for more than half of the increase in rush-hour congestion in San Francisco’s bustling downtown, according to a study published Wednesday in Science Advances. Other downtown areas across the country may be experiencing the same jump in gridlock, the researchers said, as people turn to their phones to arrange rides rather than walking, taking the bus or staying home.

San Franciscans have been complaining about bumper-to-bumper carriage traffic since 1873. But over the past decade, the average commute time has risen, and so has frustration and wasted time.

Bay Area residents aren’t alone in their traffic tribulations. People in America spent an average of 26.4 minutes just to get to work each day in the latest data from the U.S. Census Bureau, and that number doesn’t include the average commute home.

The contentious gig economy has made these app-based ride services part of everyday life for many people who live in cities and suburbs, whether they use the services, drive for the services or dodge idling cars on their own commutes.

“This study is data-driven transparent research into a question that’s really profound for public life,” said Joe Castiglione, an urban planner at the San Francisco County Transportation Authority who co-authored the study.

Castiglione said while people sitting in an Uber do benefit from the price and accessibility of that transportation, there’s a trade-off for everyone else — the commute is slower, longer and more difficult.

With the growth of transportation network companies or TNCs (that’s the preferred legal term for app-based ride-sourcing services like Uber, Lyft and a handful of small competitors), Castiglione has been itching to tease apart their effects on the city’s roads.

Until recently, though, he didn’t have enough information.

TNCs in San Francisco are required to report on each ride they provide to the California Public Utilities Commission, but researchers and city planners don’t have access to that data. So, Castiglione and his colleagues set out to collect it themselves. 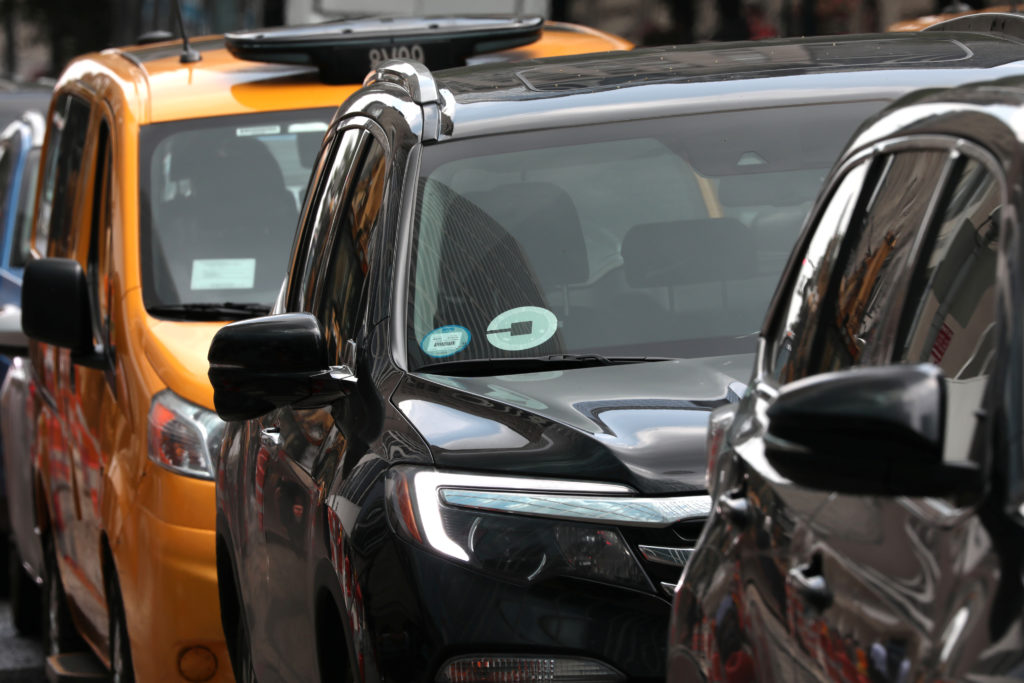 To recreate a map of street-by-street trips in downtown San Francisco, the team developed a clever way to monitor Uber and Lyft apps every six seconds for a period of six weeks in November and December of 2016. Simply put, they had algorithms mining data from the app while it was constantly open in order to build their dataset.

When a TNC user pulls the app up on their phone, nearby cars that are not driving a passenger at that moment appear on a map onscreen — the researchers used that information to extrapolate when the cars were, in fact, driving a passenger. The team assumed that the moment a car disappeared off the map marked a rider pick-up, and the moment that same car reappeared was a passenger drop-off, so the time in between must have been a passenger-occupied ride.

Using their trip data combined with a model of traffic patterns in San Francisco, they could create a picture of car congestion in a world where people can whip out their phones to summon a ride.

The researchers adjusted their traffic model to account for population growth, employment growth and other demographic changes, so in the end, they could compare what San Francisco’s traffic patterns would look like with and without TNCs between 2010 and 2016.

According to the study, weekday delays increased by 62 percent overall. The team estimated that, in the absence of those apps, the delays should have only increased by 22 percent. That means 40 percent of the added traffic — more than half of the total 62 percent increase — was thanks to TNCs.

What we find is that two-thirds of the TNC trips are adding new vehicles to the road.

These clogs speak to how ride-hailing cars may be affecting other modes of transit.

“If someone was otherwise in a personal car, and they switch to a TNC, then there’s no net effect,” said Greg Erhardt, a transportation engineer from the University of Kentucky and the study’s first author. “If someone switches to a TNC where they’re carpooling instead, there’s actually a net benefit to traffic.”

By that, Erhardt means an UberPool can reduce traffic on the road, whereas traveling solo in an UberX is less helpful. But if people are also switching from traveling on foot or via bike, they’re adding to congestion too.

“What we find is that two-thirds of the TNC trips are adding new vehicles to the road,” Erhardt said.

And that’s not to mention “deadheading” — the time a driver spends driving to a passenger or circling blocks waiting for a new fare. Those cars contribute to congestion, too, but aren’t actively helping any passengers get to any destination.

Why it matters and how to fix it

Nobody enjoys sitting in traffic. It’s unproductive and frustrating. It also produces excess carbon and other vehicle pollution. But in order for city agencies to curtail congestion, they need information, Erhardt said, and the companies aren’t willing to share their data.

In conversations with the PBS NewsHour, Lyft argued that sharing data with researchers is a security risk. The company has other criticisms of the new study, too.

“The study in question overlooks notable contributors to congestion including increased freight and commercial deliveries, and tourism growth,” Alex Rafter, a Lyft spokesperson, stated in an email.

Both Uber and Lyft have invested in electric scooters and bike shares around the country.

According to the study, San Francisco’s recent growth in tourism might cause traffic to be “a fraction of a percent higher than we estimate in the background traffic volumes.” TNCs, on the other hand, accounted for 15 percent of all vehicle trips within San Francisco in 2016. Freight and deliveries are harder to tease out — while online shopping and deliveries may have increased, the researchers don’t know how often those deliveries replace in-person shopping trips.

“This is the most granular and meticulous study of any given city of anything I’ve seen globally,” said Bruce Schaller, a former transportation official in New York City who now works as a consultant. “It’s a very time-consuming but novel way to go about things.”

Schaller thinks these results could be applicable to congested downtown areas in cities around the country. “What they’re finding in downtown San Francisco is very similar to what I was finding in midtown Manhattan,” Schaller said.

Despite disagreements over where to point the finger for increased downtown traffic, TNCs and city agencies seem to have similar solutions in mind. One option might be to encourage the use of buses, bikes, scooters and walking to clear cars off the most congested stretches of road. Both Uber and Lyft have invested in electric scooters and bike shares around the country.

Erhardt stressed that the rise of these companies over the past decade has been something of a shock to cities, which typically take time to evolve.

Left: The average American spends 26.4 minutes commuting to work. Traffic is getting worse, and it may be due to ride-hailing apps. Photo by elcovalana/via Adobe