This human protein may unfurl toxic tangles in Alzheimer’s disease

A human protein — called CyP40 — can untangle the neurodegenerative clumps that characterize Alzheimer’s and Parkinson’s diseases, scientists reported Tuesday in the journal PLoS Biology. The findings may guide new therapeutic avenues for these conditions.

“We were surprised that CyP40 could disaggregate the tangles,” Laura Blair, a biologist at the University of South Florida and senior author of the study, said because very few human proteins can take these clumps and undo them.

In Alzheimer’s and Parkinson’s diseases, certain proteins in the brain stick together in toxic, knotted clumps that cause cognitive decline. One example in Alzheimer’s disease is tau protein, an often overshadowed counterpart to the more heavily studied amyloid beta protein.

In this study, mice genetically modified to display features of Alzheimer’s disease showed fewer tau tangles and improved memory after gene therapy with CyP40. CyP40 is a human enzyme that normally helps healthy proteins mold into useful shapes, but also unfolds and degrades ones that deform over time.

These genetically modified mice begin to accumulate “sticky” forms of tau after one month of age and show nerve cell loss by three months. Tau tangles start to appear in five or six months’ time. The researchers delivered CyP40 to the hippocampus — a memory region in the brain — of six-month-old mice, which reduced brain cell loss.

Toxic tau takes on a shape with multiple hairpin-like turns, similar to switchbacks on a hiking trail squished on top of each other. The scientists wondered if enzymes like CyP40, which can undo these kinks in normal proteins, could also unravel the snarled knots of tau.

To observe this process, they squirted CyP40 protein into a petri dish with tau tangles, and then examined the mixture under an electron microscope. They saw that CyP40 not only reduced the tangles’ size, but dramatically changed their shape. 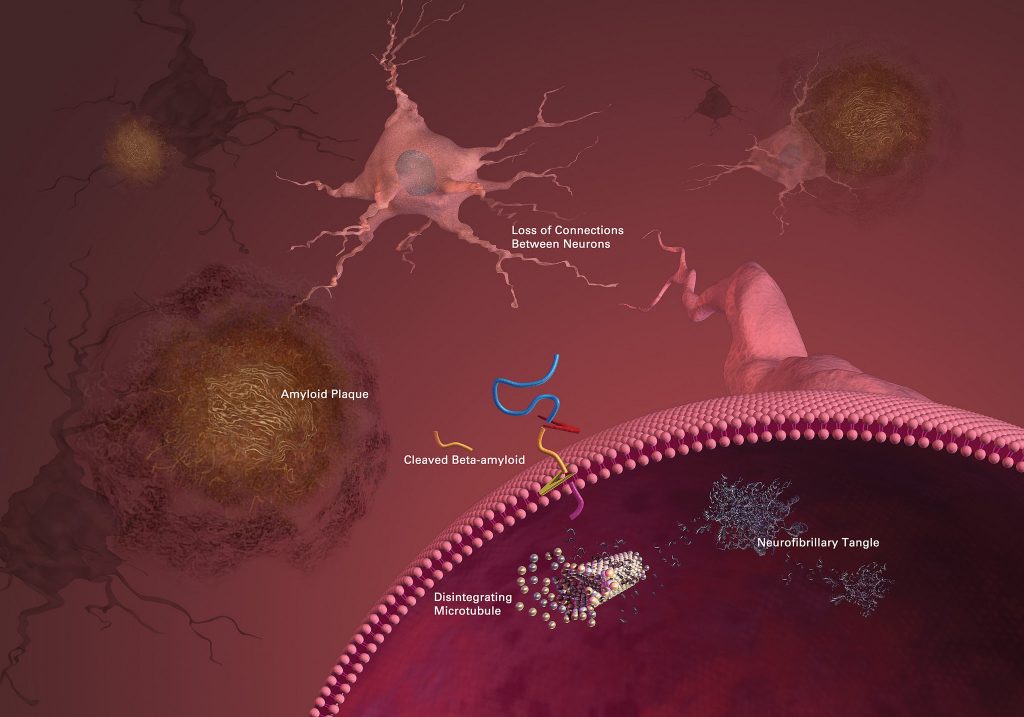 In Alzheimer’s disease, nerve cells lose their connectivity with each other due to the buildup of amyloid plagues made of cleaved amyloid beta protein and neurofibrillary tangles made of tau protein. Photo by National Institute on Aging/National Institutes of Health/via Flickr

Going further, the scientists repeated this experiment, but replaced tau with one of two other proteins that tangle in neurodegenerative disease: alpha-synuclein in Parkinson’s disease and amyloid beta in Alzheimer’s disease. They found Cyp40 could break down clumps of alpha-synuclein, but not amyloid beta ones.

Based on their results, the team thinks that CyP40 untangles tau and alpha synuclein proteins by attaching to their hairpin turns, which amyloid beta lacks, and unbends them.

Blair noted some limitations in their work. For example, while the mouse model mimics Alzheimer’s disease, the rodents produce a different form of tau, compared to what’s found in the human disease. It’s also unclear how a similar gene therapy would be delivered to humans.

But while replicating this work in humans is years away, Blair hopes their research provides a deeper understanding of the biology of tau and alpha-synuclein that will eventually lead to clinical advances and earlier diagnoses.

“If we understand which kinds of tau are more likely to aggregate and form neurotoxic entities, then we can know which patients are more likely to be at risk to develop this disease,” Blair said. “It’s why we go to work everyday.”