Remember 2016—it is the infamous year that has already recorded the largest annual change on record in the makeup of the air you breathe.

Fueled by people’s pyromania and the El Niño global weather phenomenon, carbon dioxide concentrations reached 409.44 parts per million (ppm) on April 9 at an air-sampling station atop Hawaii’s Mauna Loa, a rise of more than five ppm since the same date last year. And it could get worse.

“Where you assign the peak will depend on whether the focus is on daily, weekly or monthly averages. The monthly peak is certainly still ahead of us,” says Ralph Keeling, a geochemist at Scripps Institution of Oceanography in California who measures atmospheric carbon dioxide (CO2) every day at Mauna Loa and other stations, carrying on the work his father started in 1958. “The recent daily values were extraordinarily high, however, so perhaps [they] won’t be overtaken.” 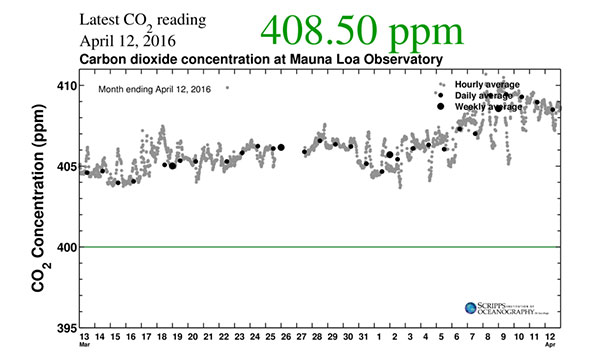 Carbon dioxide concentrations from March 13 to April 12, 2016 as measured at the Mauna Loa Observatory in Hawaii. Photo by Scripps Institution of Oceanography in California

The previous record year-on-year increase was 3.7 ppm in 1998. CO2 concentrations typically peak in spring, just before trees, plankton and other plants across the Northern Hemisphere awaken from their winter slumber and begin to greedily suck CO2 out of the sky to fuel photosynthesis and the growth of leaves and cells. But even that titanic greening will not be enough to pull CO2 below 400 ppm ever again, Keeling suspects.

The fall of 2015 could be the last time the reading dipped below that mark at Mauna Loa, which has become a kind of global bellwether as the first place where CO2 concentrations were actively monitored—and, perhaps, at the 12 other sites where Keeling’s program now makes the same measurements from the Arctic to the Antarctic. 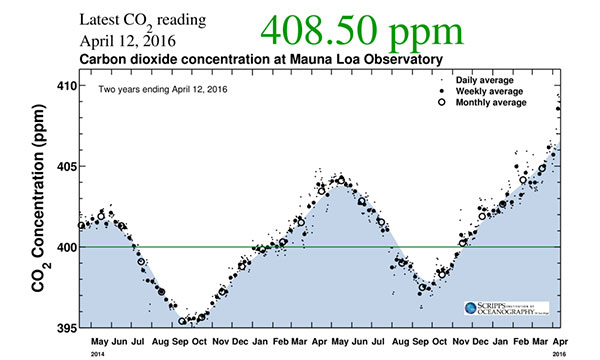 Carbon dioxide concentrations from April 2014 to April 2016 as measured at the Mauna Loa Observatory in Hawaii. Photo by Scripps Institution of Oceanography in California

Atmospheric CO2 has risen by nearly 100 ppm since Keeling’s father, Charles David Keeling (pdf), took the first measurements at Mauna Loa in March 1958—and concentrations have jumped by nearly 30 ppm in the past decade alone, propelled by a historic increase in the burning of coal, oil and natural gas.

“The atmospheric and oceanic CO2 increase is being driven by the burning of fossil fuels,” says Pieter Tans, a senior scientist at the National Oceanic and Atmospheric Administration’s Earth System Research Laboratory, who leads the U.S. government effort to monitor global greenhouse gas levels. “When the burn rate is high, the CO2 increase rate is also high.”

A 100 ppm, or 0.01 percent, rise in CO2 levels may not seem like much but it has already been enough to warm the globe by roughly a degree Celsius over the past century. More warming is expected as CO2 invisibly accumulates in the sky, where the molecule persists for centuries, and then traps more heat as it insulates the planet.

And although Earth has seen CO2 levels much higher in the remote past, the human species has not—and our penchant for burning may continue to alter the climate that has allowed our civilization to flourish.

There is hope, however, as CO2 from burning fossil fuels and other human activities appears to have leveled off in 2015 at roughly 40 billion metric tons of CO2 liberated into the atmosphere. But in recent years massive brush fires deliberately set to clear land in Indonesia and a general increase in forest fires around the world likely helped spur the historic jump in levels from 2015 to 2016. 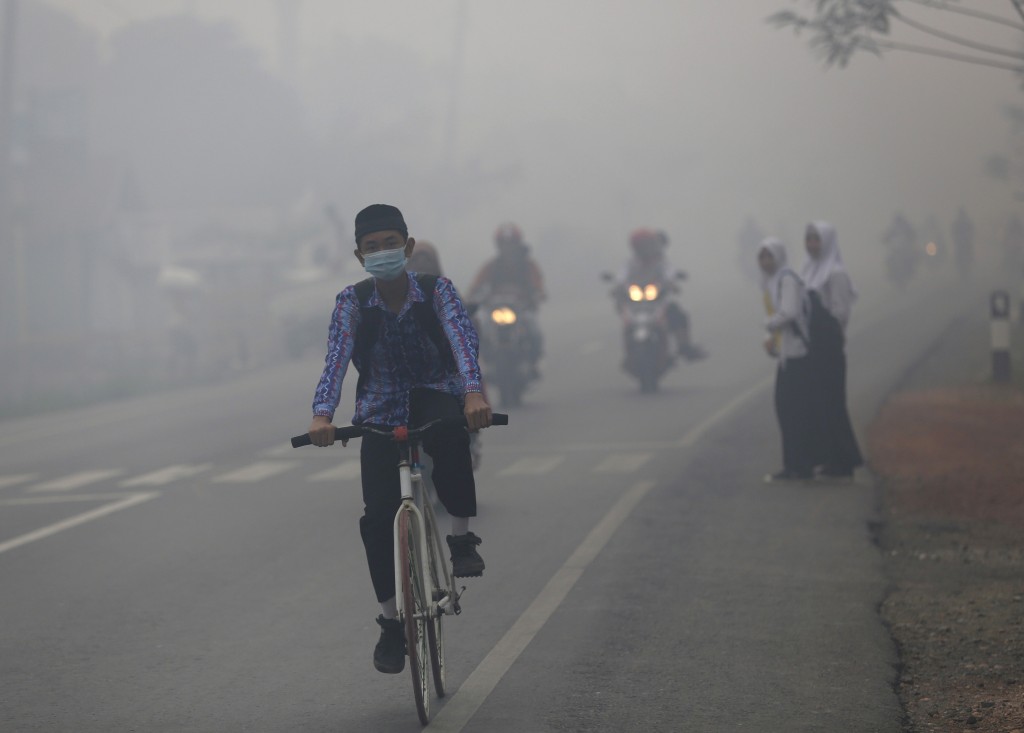 A boy rides his bike in the haze along a highway outside the south Kalimantan city of Banjarmasin October 28, 2015. Indonesia’s weather agency failed to predict that the effects of the El Nino weather phenomenon this year would be worse than in 1997. Last autumn, fires that raged across the archipelago created a haze that blanketed much of Southeast Asia, and, according to authorities, left more than half a million Indonesians suffering from respiratory ailments. Photo by Darren Whiteside/REUTERS

El Niño—a warming of tropical Pacific Ocean waters that changes weather patterns across the globe—causes forests to dry out as rainfall patterns shift, and the occasional unusually strong “super” El Niños, like the current one, have a bigger effect on CO2 levels in the atmosphere. The previous super El Niño, in 1998, saw the earlier record CO2 jump of nearly four ppm.

“During an El Niño, there are ‘anomalous’ patterns of temperature, precipitation and drought over many regions of the Earth. We have observed that the CO2 rate of increase gets an extra boost during an El Niño,” Tans explains. “We also know that most of the extra boost is provided by terrestrial ecosystems, not by the oceans.”

The current “Godzilla” El Niño is already weakening—and forests in Indonesia or elsewhere can regrow and resume absorbing CO2. But fossil fuel burning will keep pumping out more CO2 year after year, pushing concentrations of the greenhouse gas higher and higher. Last year saw CO2 rise by three ppm from the previous year, among the largest increases on record.

Unfortunately, 2016 looks set to top that.

This article is reproduced with permission from Scientific American. It was first published on April 14, 2016. Find the original story here.

Left: The sun is seen behind smoke billowing from a chimney of a heating plant in Taiyuan, Shanxi province in China on December 9, 2013. Photo by Stringer /REUTERS