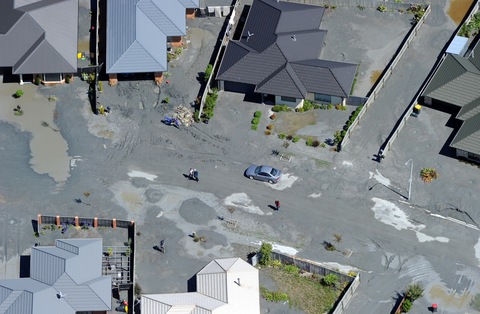 A suburban street is covered with silt forced out of the ground by liquefaction on February 24, 2011 after a 6.3 earthquake devastated the city of Christchurch two days earlier. Photo by AFP/Getty Images.

On Wednesday’s NewsHour broadcast, we aired an excerpt of a “NOVA” piece about a dense trove of ice age fossils found near Colorado’s Snowmass Ski Resort. Among them, well-preserved bones of mammoths, ground sloths and a once-thriving population of mastodons.

One theory is that these animals were snuffed out by a phenomenon called liquefaction that struck during an earthquake. Liquefaction occurs when soil is subjected to severe shaking and the ground loses its bearing pressure and slumps, sometimes pulling objects down with it. Kirk Johnson of the Denver Museum of Nature and Science, who led the dig, explains below.

Since liquefaction isn’t a household term, we did some research on the mechanics, the likelihood and the danger of the phenomenon. It extends beyond the ice age to modern-day quakes. Ed Harp, a USGS research geologist and expert on the subject, said he’s seen liquefaction cause buildings to topple and empty gas tanks to pop out of the ground.

During the magnitude 6.3 earthquake in Christchurch, New Zealand, in February 2011, liquefaction sucked in cars, damaged roads and snapped sewer lines. In the 1964 Niigata, Japan, earthquake, several four-story buildings tipped as much as 60 degrees when the soil underneath them liquified and deformed. Liquefaction was a major factor in the fires that broke out after the 1906 quake in San Francisco, Harp said. It ruptured water lines in the city’s Marina district, cutting off water supply needed to fight the fires. During the 1964 earthquake in Prince William Sound, more than 200 bridges were damaged or destroyed by lateral spreading of flood-plain deposits toward river channels. And in 1983 in Idaho’s Thousand Springs region, earthquake-related pressure in a liquified zone caused what’s known as sand boils: geysers that shot sand, gravel and water as high as 50 feet into the air.

“When it was over, there were huge cavities in the field where it had occurred,” Harp said. “They had created an underground kind of cavern that went down to the nearest river and later caved in.”

Some facts on the phenomenon:

Liquefaction occurs mostly in clay-free sands and silts. If the soil contains more than 10 percent clay, it can’t liquify. “It has to be pretty clean sand so that the pore pressures can develop during seismic loading,” Harp said. The ground must shake “for quite a while” in order to build enough pressure to liquify, he added. It doesn’t happen immediately.

The younger and looser the sediment and the higher the water table, the more susceptible a soil is to liquefaction, according to the USGS. See explanation here.

Typical effects of liquefaction include loss of bearing strength, wherein the ground can no longer support structures built on it; lateral spreading, where a surface layer slides down slopes, a common cause of road damage and ruptured gas and water lines; and flotation, in which objects buried underground, like pipelines and empty fuel tanks, float suddenly to the surface.

“If you were standing on a piece of land that had liquefied, it would be terrifying — you would just go down,” said John Filson, program coordinator for the earthquake hazards program at USGS. But, he added, he’s never heard of any human getting buried by it.

Harp doubts that liquefaction trapped the ice age animals. “It’s possible I suppose, but I think it’s unlikely,” he said. “As soon as you create a lot of deformation in an area, it tends to dilate and and stiffen. If the animals were thrashing around, it would tend to make [the ground around them] a little more stiff, and then they could get out.”