In Louisiana, Wetlands Erosion is a Slow-Moving Crisis 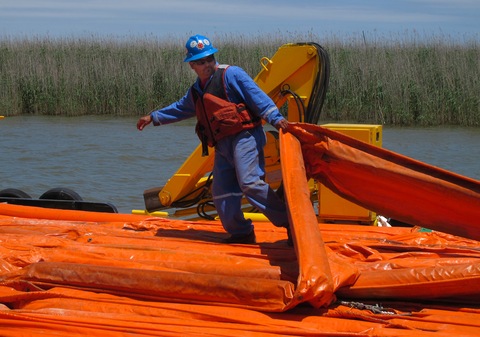 A worker lays boom beside a fragile Louisiana wetland area early in the Gulf oil disaster on April 29. Photo by Erica Berenstein/AFP/Getty Images

City fathers love to talk about the numbers: 78 percent of the population of New Orleans has returned to the city since Hurricane Katrina. Seventy percent of all the jobs are back. The U.S. Army Corps of Engineers has rebuilt 220 miles of the city’s levees and flood walls.

The public school system is undergoing a miraculous transformation. Today, 59 percent of the city’s students attend schools that meet state standards. Tourism is back. The French Quarter and the city’s music scene are thriving. New Orleans, five years after Katrina and the flooding that put 80 percent of the city underwater, is one of the fastest-growing cities in the country.

What hardly anybody talks about in New Orleans is what could one day undo all this progress. The Louisiana coastline — with its valuable wetlands — is in trouble.

The degradation of the Gulf Coast’s wetlands had been going on even before Katrina. Since the 1930s, when scientists first started tracking wetland erosion, 1,900 square miles have been lost — an area the size of Delaware. What Katrina did was speed up the process. Eighty square miles were wiped out by the hurricane in eight hours.

I went with a NewsHour crew on a tour of the wetlands in the days after Katrina. Even with all the destruction at the time, it was a sight to behold. As our airboats made their way through the seventh-largest estuary in the world, we saw thousands of migratory birds. The state estimates 5 million birds use the area each year as breeding grounds. At every turn in the canals that define some of the landscape, we saw alligators big and small poke their eyes out of the water to inspect us.

But the marshes and waterways aren’t just important because of their teeming wildlife. The areas are also an essential part of the state’s economy. The Louisiana Seafood Marketing Board said the coastal marshes and surrounding islands supply one-quarter of the nation’s annual seafood catch, which amounts to about $2.4 billion a year in wages and sales.

Just as important: The wetlands act as a buffer against hurricanes. The system of marshes, sand dunes and islands slow down storm surges and help protect areas such as New Orleans to the north. Levees built to protect areas from flooding have cut off sediment replenishment in the marshes. Oil and gas exploration and pipeline canals have allowed too much salt water to get into the fragile ecosystem. All this turns areas of vegetation into open water. (This past week on the NewsHour, Ivor van Heerden, a former deputy director of the Louisiana State University Hurricane Center, discussed why healthy wetlands are key to helping protect New Orleans from hurricanes.)

In the years since Katrina, fishermen and scientists were encouraged as some types of shrimp and oysters appeared to bounce back. This spring shrimpers were looking forward to what they thought would be their best catch in five years. Then came April and the BP disaster.

The oil spill has magnified the problem of wetland loss. A thick layer of oil covered miles of coastline with what looked like a huge film of brown latex paint.

Scientists are divided over what the oil spill will mean long-term to these areas. But they all seem to agree that something big and bold is needed to restore the wetlands.

In July, a Senate subcommittee approved $35.6 million in federal funding, including $19 million to start wetlands-reconstruction projects and $16.6 million for prereconstruction research. This was at President Barack Obama’s request in his 2011 fiscal budget. More federal dollars could be in the pipeline.

But scientists remain concerned, and the Louisiana coastline continues to lose a wetland area the size of a football field every hour.