How Connecting 7 Billion to the Web Will Transform the World

Google leaders Eric Schmidt and Jared Cohen call the Internet “the world’s largest ungoverned space,” a space that is increasingly growing. The tech moguls outline their vision of a world universally connected to the Internet in their recent book, “The New Digital Age: Reshaping the Future of People, Nations and Business.”

Schmidt and Cohen argue that as more of the globe gains Web access, people will become empowered, having more choices and more freedom. While this will prove to benefit the majority of people, more connectivity will present new challenges that know no boundaries.

In this exclusive online interview, Schmidt and Cohen talk with Judy Woodruff about how those among the world’s remaining 5 billion who are not yet fully connected to the Internet are finding creative solutions to share information and engage in new ways.

Tune in to the Thursday evening broadcast to watch the full interview. Watch on our live stream at 6 p.m. ET or check your local TV listings to find out when PBS NewsHour airs in your region.

Do you have questions for Eric Schmidt or Jared Cohen? Leave your questions in the comments section at the bottom of the page or send them via Twitter by tweeting to @newshour with the hashtag #digitalage.

JUDY WOODRUFF: And I’m back now with Eric Schmidt and Jared Cohen, talking about your book “The New Digital Age.” You — in the book, you talk about how, yes, we’ve got 2 billion people online right now, but it’s just a matter of time before another 5 billion people are connected. But Eric, aren’t a lot of those folks in really remote areas, very poor? It’s hard to imagine how all those folks are going to get connected so quickly. 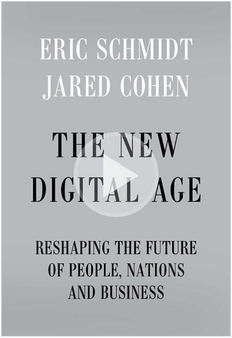 ERIC SCHMIDT: These people are just like us. They’re human beings as well. They’re trapped in a bad system, they have poverty, but they have the same aspirations as we do. What they’ll do is they’ll be very clever. When a phone shows up, they’ll share it. We saw, when we were in South Sudan, people were so excited about content that they would smuggle information on these little micro SD cards. Even without a network, they wanted to share information.

So for instance, we were in Pakistan and met with a group of women who’d been attacked by the Taliban with acid, which tragically carries a terrible stigma in the physical world. They all live together and were able to essentially have a nonstigmatized identity online, starting businesses; some of them were ultimately able to meet people and eventually get married.

So technology helps address some of the unique sets of challenges that our future users will encounter that are in fact very different from the 2 billion who are already connected.

JUDY WOODRUFF: At the — almost at the other end of the spectrum, you talk about some of these almost fantasylike scenarios of the future. A hologram vacation — what is — what’s that all about?

ERIC SCHMIDT: The — in the developed world, the world with a lot of bandwidth — and remember, Google has, you know, gigabit fiber projects now in America, and others are working on this as well — we’re going to have so much bandwidth and so much computation that we can begin to do things which seem like they came out of “Star Trek.”

And it’ll be possible, for example, to have a memory room, which will reconstruct some visual memory that you have based on the history that you’ve recorded and the facts as they were.

It’ll be possible to have computers that make suggestions to you. It’ll predict there’s a traffic jam in an hour because it knows there’s going to be a ballgame coming out. These assistants will make your life far, far more interesting. They’ll make it visually interesting.

They’ll help you with your health. So for example, you’ll take a pill that will go into your body, Wi-Fi out what’s going on; the phone will call the doctor; the doctor will call you back if you’re in trouble. Over and over again, the sort of, the Moore’s Law, the sort of continuation of this exponential growth means that computers will serve us and make us more healthy.

JUDY WOODRUFF: Is all that dependent on a healthy economy, that if you’re not — if people aren’t making enough money to do all these things, they may not happen?

ERIC SCHMIDT: Well, one argument, if I may — one argument is that this is a declining-cost industry, and so as long as the fundamental rates of improvement of computing continue, which they will for some number of years — they’re slowing, but they’re going to continue — I think we can say that this will be true for almost everybody in America.

JUDY WOODRUFF: What about —

JARED COHEN: And more connectivity is actually positively correlated with the growth of an economy. This is one of the reasons we’re so adamant about revealing dictators’ dilemmas in the future, which is autocratic countries are used to hearing about their political alternatives.

One of the reasons we went to countries like North Korea is to explain the technological alternative path that they can follow and to emphasize the fact that you — in the future, you can’t actually grow your economy without also expanding connectivity.

JUDY WOODRUFF: Two specific issues or things I want to ask you about that you write about in the book, and one is the Arab Spring, where there’s no question technology enabled so much of what happened.

People think particularly about Egypt, but they think about the countries across that belt of the Middle East and North Africa. And yet it’s much more complicated than just, oh, we have more information; now we’re free. Doesn’t — I mean, is there a cautionary lesson in all that?

JARED COHEN: The lesson that we argue in the book is that when you look at the Arab Spring countries and what’s happened there is that in a future where everybody’s connected, revolutions will be easier to start and happen faster, but they’ll actually be harder to finish.

They’ll be harder to finish because the accelerated pace of movement-making will actually favor public figures, not necessarily seasoned leaders. The big lesson to take away is you still, even in an era of lots of connectivity, can’t have a successful revolution if you don’t have leaders and if you don’t have functional institutions that can actually deliver for the population. So technology can help, but it can’t manufacture those two things overnight.

JUDY WOODRUFF: Want to add anything to that?

ERIC SCHMIDT: I agree with that. I think that the empowerment bias creates this interesting phenomena where you can have these groups that look like they’re going to be revolutionaries, and if you’re the government, if you underestimate them, that might be to your peril, but you might also overestimate them, do some physical action which then legitimizes them, and now you’ve got a real social movement against you. It’s much harder to be an autocrat in this new empowered world.

JARED COHEN: And of course, one of the things that Eric and I speculate about in the book is you can imagine a situation where 10 years from now the celebrities of the Arab Spring become seasoned leaders, and amidst a presidential debate and a campaign, which all of a sudden starts to look more democratic, the crowd starts going back through the footage from the Arab Spring and compares their Arab Spring credentials.

So the formula then becomes Arab Spring credentials plus real leadership skills equals a leader 10 years from now in the Middle East and North Africa.

JUDY WOODRUFF: OK, the last thing I’d like to ask you about is something that you write about that it just is in the air and keeps coming back, and that of course is WikiLeaks and other, if you will, whistle-blower-type dumps of classified information put out there without any care as to who they may hurt.

And — but you are pretty confident — you write confidently in the book that this is not going to proliferate as much as some people believe. What gives you that confidence?

ERIC SCHMIDT: I think we — we met with Julian Assange a couple of years ago, and without speaking about his legal troubles with respect to Sweden, we talked about his motivation. And he made a broad argument that there will be lots of such sites, that this technology was generally available.

And yet if you looked, there haven’t been very many. And one reason may be that the leakers have to trust the other side and that trust is something which is hard to manufacture in cyberspace because it’s easy to be deceived on the end of a connection, especially if you’re dealing with sort of shady people to start with.