This analysis is spoiler-free.

If you’re a person of color in America right now, it may feel like you’re riding a carousel of darkness. Viral stories of black killings, once occasional events, morphed into déjà vu in 2016 — potentially triggering PTSD-like trauma. The rise of the alt-right, a white nationalist movement, echoes sentiments of public segregation once thought long gone. Meanwhile, Jim Crow-era restrictions on social, economic and political mobility have evolved new facades, namely gentrification and gerrymandering.

Hidden Figures offers a counter-narrative of hope and a prescient blueprint for unity against what feels like a vicious cycle of inequality. This bestselling biography-turned-Hollywood biopic reveals the untold story of Katherine G. Johnson, Dorothy Vaughan, Mary Jackson and hundreds of black female mathematicians who made crucial contributions to America’s space program.

But the narrative also charts how Hampton, Virginia emerged as a driving force for aeronautics innovation and racial integration — even as the state fought against the rise of civil rights.

Writer Margot Lee Shetterly decided to pursue Hidden Figures in 2010, while visiting her parents for Christmas. After church one day, she and her father began chatting about his days as a scientist at Hampton’s Langley Research Center — the first field facility for NASA’s predecessor, the National Advisory Committee for Aeronautics (NACA). Eventually, the conversation drifted onto the black and white women who worked as mathematicians — so-called human computers — during the center’s early years.

“I knew the women. Many of them worked with my dad, and I’d seen them growing up,” Shetterly told NewsHour. “But I didn’t know much about their particular stories — how they had come to work at NASA, or why there were black women working there.”

Shetterly spent the next three years combing through historical documents. She checked local newspapers, especially ones for the black community, where she found her canvass for describing daily life in Hampton. One clipping went as far as reporting what Mary Jackson wore at her wedding, she said. Shetterly also sorted through heaps of archival material on NACA and NASA. 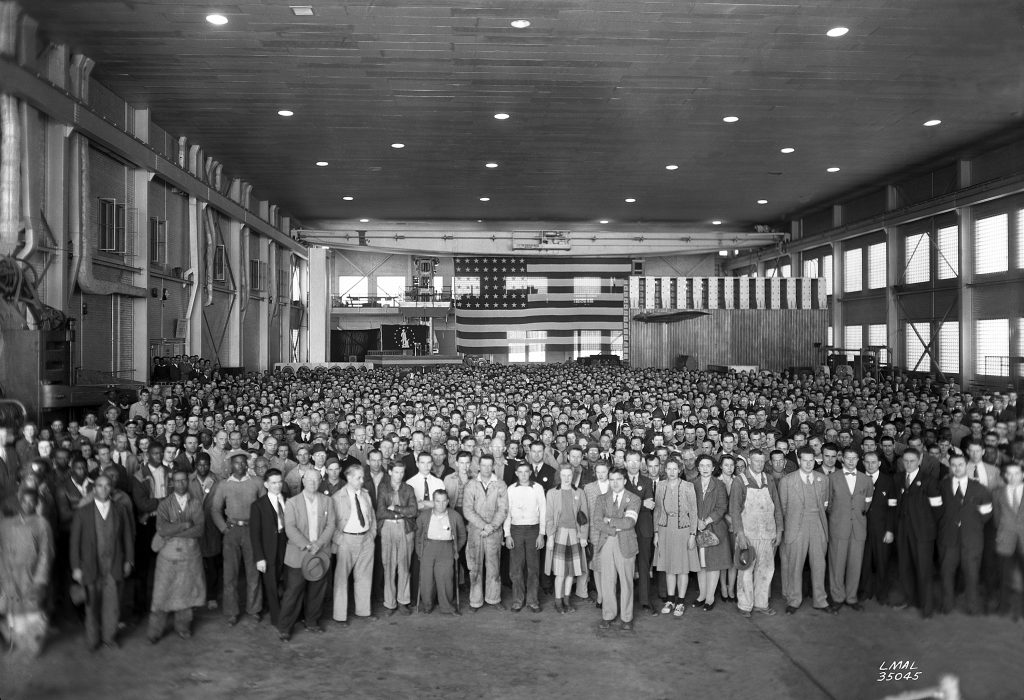 1,500 employees or so at NACA’s Langley Memorial Aeronautical Laboratory on November 4, 1943. Photo by NASA

“So a Langley historian, this woman named Mary Gainer, is amazing. She and her staff put so many of the early documents online — photos, badges, artifacts,” Shetterly said. At one point, Shetterly figured out which women had desks in the same room, based on a collection of phone books and floor plans. Meanwhile, she interviewed Katherine Johnson, now in her late-90s, Johnson’s children, the surviving family members of Mary Jackson and Dorothy Vaughn as well as other people who worked with them.

Had I known these women existed, maybe I would have dreamed to be a rocket scientist?

The result is a time machine that marches, moment by moment, through the American aeronautics revolution and desegregation. NACA and the Langley Research Center were founded during World War I, as planes began to flex their muscles in warfare. As the aviation industry expanded over the next two decades and into World War II, so too did the need for aeronautics research — and human computers. As the pool of qualified male candidates fizzled, NACA departed from sexist norms, and Langley hired its first female computers in 1935.

After Franklin Roosevelt relaxed discriminatory employment practices for war projects, NACA trail-blazed once more in 1943 by considering applications from black women, as Shetterly catalogues in her book:

“No photo advised as to the applicant’s color — that requirement, instituted under the administration of Woodrow Wilson, was struck down as the Roosevelt administration tried to dismantle discrimination in hiring practices. But the applicants’ alma maters tipped their hand: West Virginia State University, Howard, Arkansas Agricultural, Mechanical & Normal, Hampton Institute just across town — all Negro schools. Nothing in the applications indicated anything less than fitness for the job. If anything, they came with more experience than the white women applicants, with many years of teaching experience on top of math or science degrees.

The black female mathematicians who walked into Langley in 1943 would find themselves at the intersection of these great transformations, their sharp minds and ambitions contributing to what the United States would consider one of its greatest victories.”

The move transformed Hampton and Langley into a bastion of aeronautical supremacy, while also eroding racial divides over subsequent decades. Virginia was one of the last state’s to abandon Jim Crow policies such as segregated schools, even after federal cases like Brown vs Board of Education and other legislation called for change. Shetterly traces Hampton’s trail to integration, showing how America struggled with racial reforms through the lens of one progressive city and the nation’s space race with the Soviet Union. 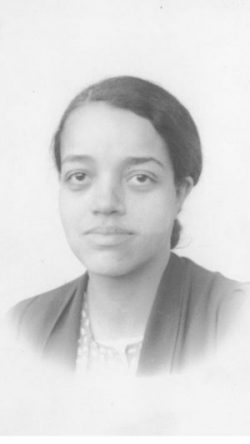 A portrait of a young Dorothy Vaughan. Photo courtesy of Vaughan Family

Dorothy Vaughn joined NACA’s segregated West Area Computing Unit in December 1943 — a group she would run six years later thanks to her mathematical prowess and leadership tenacity. Mary Jackson and Katherine Johnson landed at NACA in the early 1950s. All three were math whizzes at early ages, but Shetterly exposes how these women juggled their love for numbers with desires for family life and battles against segregation.

Each would ultimately make major contributions to aeronautics. Vaughn mastered computer programming and helped the agency transition from human to IBM computers. Jackson became NASA’s first black female engineer and a leader in research on supersonic flight. And Johnson made the crucial calculations that guided the late John Glenn and America’s first manned missions into suborbit, orbit and beyond. Shetterly plans to keep documenting these biographies as part of a series called The Human Computer Project.

The Hidden Figures movie took shape in 2014, soon after HarperCollins agreed to publish Shetterly’s book. Film producer Donna Gigliotti (Silver Linings Playbook, Shakespeare in Love) caught wind of the story, auctioned the book proposal and recruited director Theodore Melfi to the project. He was fascinated by the story, but also shocked given the typical depictions of life in the 1940s, 1950s and 1960s.

“You’ve never seen anything in film, or documentary, that tells you that women were involved in the space program at that time,” Melfi told NewsHour. “Everything you see is an image of a white male.” 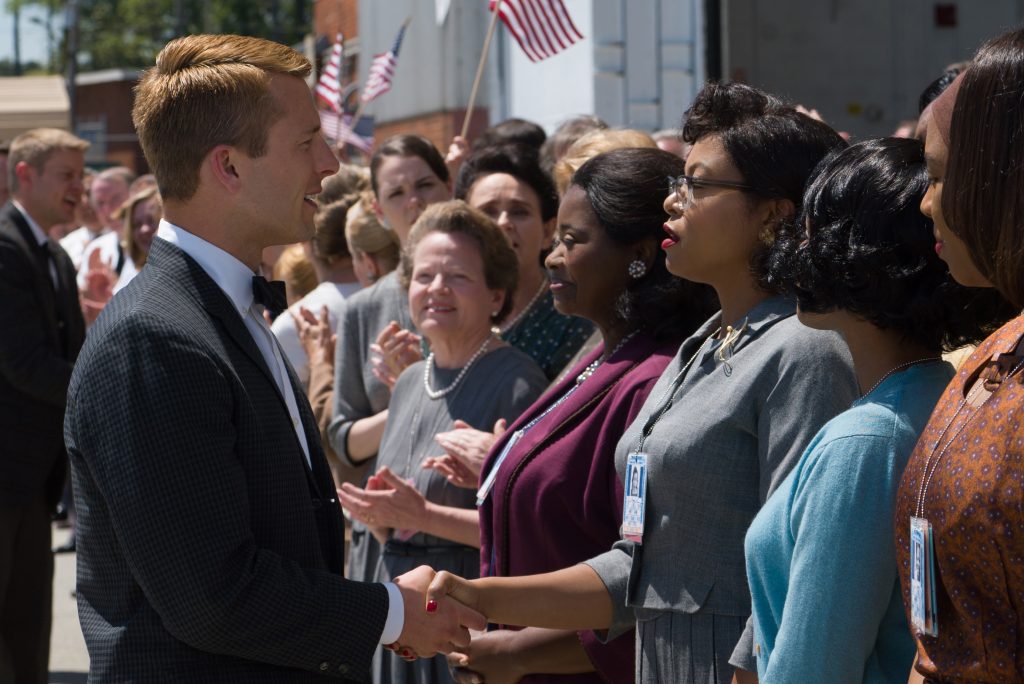 Gigliotti also recruited musician Pharrell Williams, who was raised in Hampton, to co-produce the film and soundtrack. Williams was drawn to the story given this untold story with three female African-American protagonists happened so close to his childhood home.

“You recognize these three beautiful stories are victims of the era and circumstance. It’s the 1960s, and the era is not one that necessarily celebrated, or highlighted a woman’s contribution to a narrative,” Williams said. He also enjoyed the premise due to a childhood fascination with space, NASA and rockets. (This influence percolates in his music as well. One of his earliest acts was called The Neptunes, while songs like Wonderful Place and Love Bomb carry space themes too.)

Monáe said she leapt at the opportunity to play Mary Jackson when she first learned of the story. “It became a personal responsibility to me, to make sure that no young girl, no human being, no American went through life not knowing these true American heroes,” she said.

Monáe, Taraji P. Henson (Johnson) and Octavia Spencer (Vaughn) capture key elements of their characters, such as Vaughn’s leadership, Johnson’s knack with analytical geometry and Jackson’s barrier-breaking spirit. Spencer, whose performance is nominated for a Golden Globe, and the other members of the cast spent time with mathematicians to prep for their roles. 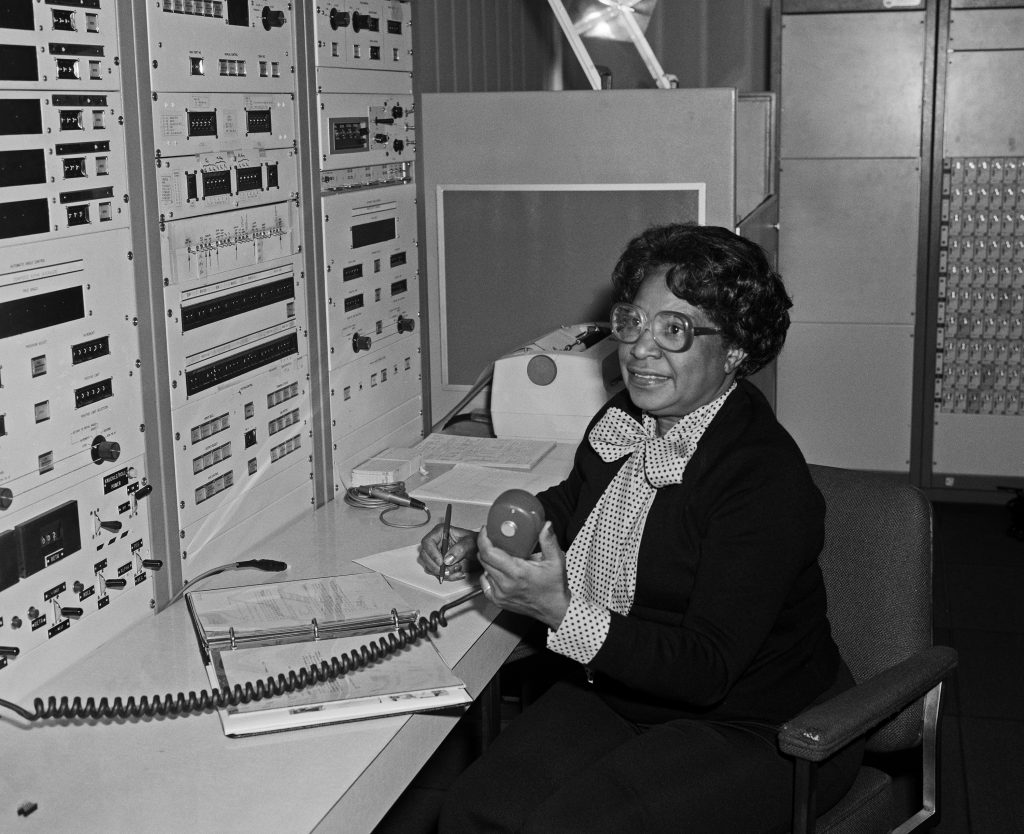 Mary Jackson grew up in Hampton, Virginia and was a teacher in Maryland before joining Langley Research Center in 1951. She became NASA’s first black female engineer in 1958. Photo by NASA

Henson said she felt robbed by not knowing about these pioneers as a child: “Had I known these women existed, maybe I would have dreamed to be a rocket scientist? But growing up there was a universal understanding that math and science wasn’t for girls.”

Kevin Costner, who plays a forward-thinking NASA director, lamented that Katherine Johnson’s contributions remained outside the mainstream as America’s first rides into space were cemented into history. But he viewed Hidden Figures as a turning point. 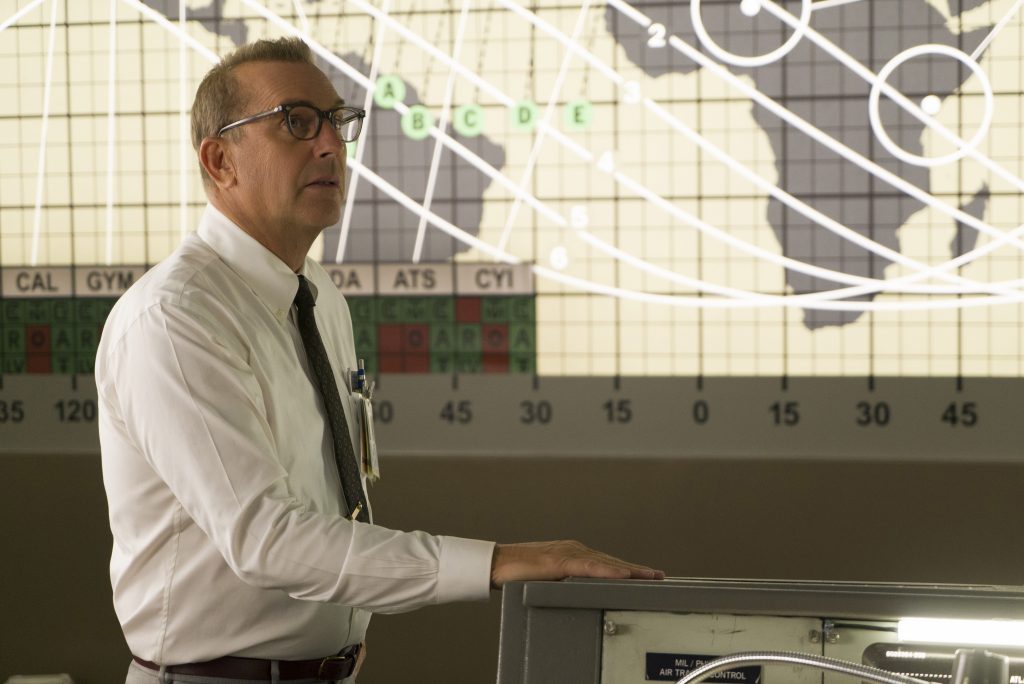 The film takes liberties with timelines and events — creating amalgams of their mathematical achievements and the racial discrimination experienced across their careers. For instance, Johnson’s landmark paper from 1960 — that described rocket trajectories for the Mercury missions — gets spread across multiple scenes with chalkboards…so many chalkboards. However, Johnson’s ability to innovate new math and much of the film’s climax involving her and Glenn are steeped in truth, according to Shetterly’s book.

NASA engineer Shelia Nash-Stevenson, who wasn’t involved with film’s production, felt the depiction landed on solid ground even with the fudging.

“It’s okay for them to take a few liberties, as long as they’re 90 percent accurate,” said Nash-Stevenson, who was the first African-American female in the state of Alabama to receive a PhD in physics. “Nobody wants to see you actually sit there for days on end calculating a formula or trajectory.” 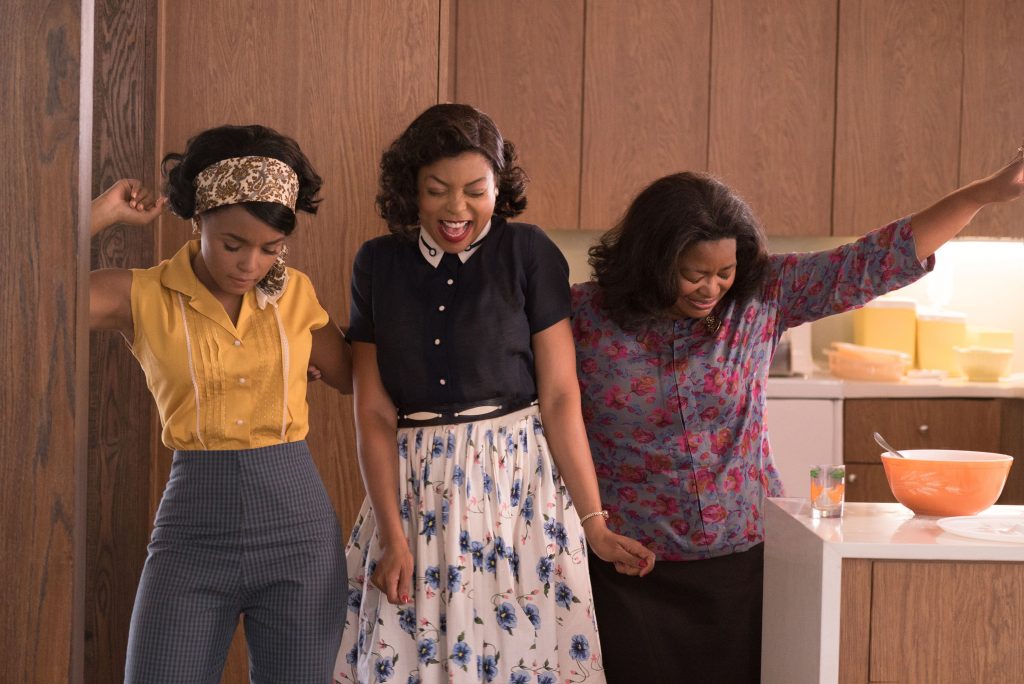 “Dorothy and the rest of the ladies, Katherine, and Mary were brilliant,” Nash-Stevenson said. “What these girls don’t realize these days is that they, too, are brilliant.”

Hidden Figures: The American Dream and the Untold Story of the Black Women Mathematicians Who Helped Win the Space Race is available through HarperCollins. The cinematic adaptation opens in select theaters on December 25, 2016. Stay tuned for NewsHour correspondent Jeffrey Brown’s interview with the cast and crew, which will air before the wide release on January 6, 2017.

Left: Katherine Johnson, a NASA mathematician who calculated the trajectories that launched the first Americans into space, at Langley Research Center in 1980. Her story features in Hidden Figures, a book and film about contributions made by African-American women during the early days of U.S. aeronautics. Photo by NASA