No fanfare. No cleverly contrived quote for the history books. And yet, at 10:30 p.m. on Wednesday, Oct. 29, 1969, three months after Neil Armstrong’s famous step, came another giant leap for mankind.

Just months after the first manned moon landing, the ARPANET, granddaddy to the World Wide Web, was brought to life with a rather inauspicious first communication: the letters “L” and “O.” UCLA grad student Charley Kline had been trying to type “LOGIN,” but the system crashed. About an hour later, he was able to input the full word and connect, via his Sigma 7 mainframe, with a computer at the Stanford Research Institute, 350 miles up the coast. “It was a room-sized machine with under-floor air conditioning,” Kline told OZY, recalling how it had just 128 Kb of memory and 24 Mb of disk space.

Creating a computer network was Bob Taylor’s idea. Taylor worked at ARPA, the Advanced Research Projects Agency, part of the Department of Defense based in the Pentagon. Launched in 1958, ARPA’s original mission was to prevent the Soviets from springing any more surprises like Sputnik, the first man-made satellite, on an unsuspecting America. For 10 years, ARPA worked on space travel and ballistic missiles, but after those were reassigned to NASA and the military, its focus shifted to more earthly matters. One was Taylor’s plan to link the computers at various universities doing work for ARPA. 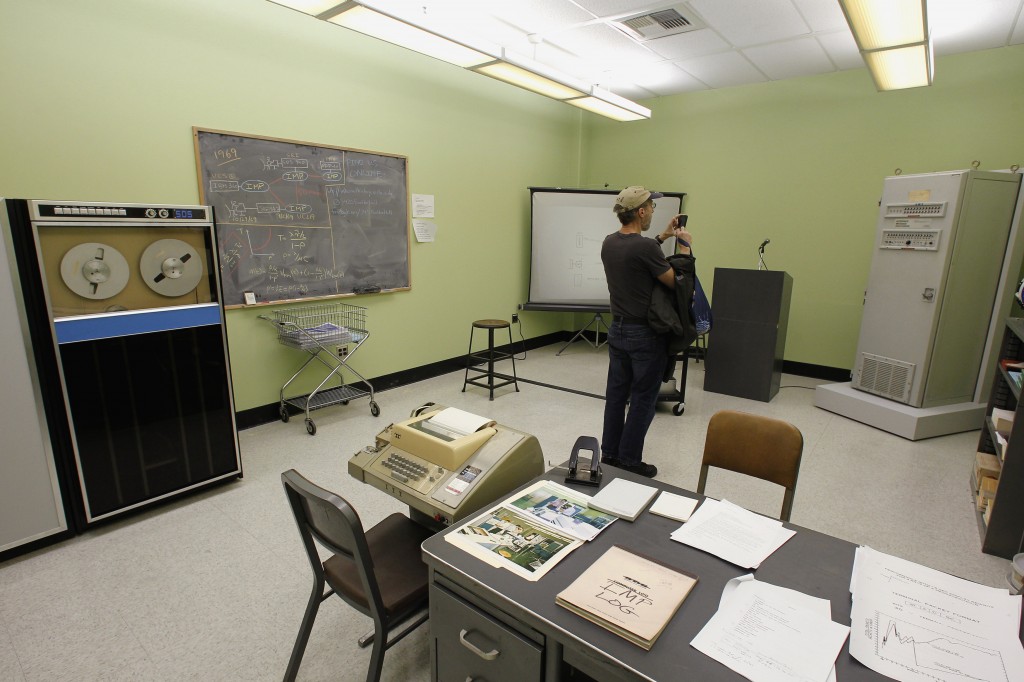 A visitor attends the grand opening of the Kleinrock Internet Heritage Site and Archive in 3420 Boelter Hall, the birthplace of the Internet at UCLA in Los Angeles. The recreated lab features a replica of the Sigma 7 computer, left, a teletype, center, similar to one used to communicate with the SIGMA 7 computer, which was connected to UCLA’s Interface Message Processor, right. Photo by Fred Prouser/Reuters

That’s where Charley Kline came in — a 21-year-old who made the improbable communications equivalent of Neil Armstrong’s first steps on the moon. Kline didn’t realize he was making history. “I had no expectation that what I was doing that evening would be particularly significant,” he said.

Fast forward to 1971, and the first-ever email was sent by Ray Tomlinson, a computer engineer and programmer for BBN Technologies. By this time the ARPANET connected 15 computers. Tomlinson had the bright idea of using the “@” symbol to separate the name of the addressee from his location. Kline’s address was CSK@UCLA.

Norway was the first country outside the U.S. to join the ARPANET, when the Norwegian Seismic Array got hooked up in 1973. That same year a connection was made to the University of London computer lab, run by Dr. Peter Kirstein. He remembers those early years well. “Emails did not come to me in London,” he said, recalling how he had to connect to USC to read his messages.

Rival networks began springing up: MERIT in Michigan, CYCLADES in France, SERCnet in the U.K. But they weren’t compatible with one another. To solve the problem, ARPA recruited Vinton Cerf — an assistant professor at Stanford who’d worked on the ARPANET as a graduate student at UCLA. He came up with a Common Internetwork Protocol, and that’s when the Web as we know it began to take shape. Cerf’s description of this protocol, published in December 1974, contains the first use of the word “Internet.”

Of course, there were lots of snags, and it wasn’t until 1978 that Cerf’s protocol was perfected on the ARPANET. ARPA then spent a few years encouraging all the other networks to adopt it, and it was officially rolled out on Jan. 1, 1983 — thus making the ARPANET part of a larger Internet, albeit an infant version. That, laughs Kirstein, “is when the shit hit the fan.”

By 1990, the ARPANET had been superseded by the National Science Foundation’s own network, NSFNET, and was therefore decommissioned. But its significance as the Internet’s trailblazer will never fade.

“I have some regrets,” said Charley, now Dr. Charles Kline, a computer consultant who worked for Cisco Systems. He wishes they’d built more security into it, for example, and made more money. But what about a bolder first message?

Kline’s supervising professor back in 1969 was Dr. Leonard Kleinrock, now 80 and still a professor at UCLA. “If you think about it,” he said. “‘L’ and ‘O’ is ‘hello,’ and a more succinct, more powerful, more prophetic message we couldn’t have wished for.”

Left: Internet technology consultant and former UCLA graduate student Charley Kline sits next to a teletype similar to the one he used to communicate with the Sigma 7 computer back in 1969, when he sent the Internet's very first message. Kline attended the grand opening of the Kleinrock Internet Heritage Site and Archive in 3420 Boelter Hall, birthplace of the Internet, at UCLA in 2011. Photo by Fred Prouser/Reuters