Cricket taco, anyone? Maybe a buffalo worm buffet? Gross, you say. Well, you may want to reconsider if you’re one of the 10 million Americans living with iron deficiency.

Certain types of edible insects can provide more iron than a slab of sirloin steak, based on new research in the Journal of Agricultural and Food Chemistry. This result may seem unsurprising, given edible insects are widely celebrated on food blogs. But this study is actually the first to calculate the mineral nutrition available through edible bugs. Such research may serve as a benchmark for moving the cuisine from hipster fringes into mass production.

Of the 496 million non-pregnant women, 32 million pregnant women and 273 million children who develop anemia each year globally, half can blame their condition on iron deficiency.

The idea for the study came from last year’s U.N. Convention for the Paris Climate Agreement, said Yemisi Latunde-Dada, a diabetes and nutrition scientist at King’s College London who led the study.

One of the delegates “advocated for the human consumption of insects for protein as an alternative to animals,” she said. That’s because livestock contributes about 15 percent of human-made greenhouse gas emissions per year, mainly through cattle production. At the same time, 70 percent of agricultural land is devoted to livestock, but many low-income regions lack access to the final product: meat.

This paradox creates a scenario where humans produce a foodstuff incapable of meeting nutritional needs in many places. The stats are staggering. Of the 496 million non-pregnant women, 32 million pregnant women and 273 million children who develop anemia each year globally, half can blame their condition on iron deficiency. Most of these cases occur in low-income portions of south Asia and Africa, but even the U.S. witnesses 230,000 hospitalizations annually due to anemia.

“We have already reached ‘peak meat,’ Daniella Martin, author of Edible: An Adventure Into The World Of Eating Insects And The Last Great Hope To Save The Planet, told NewsHour via email. “As our population grows, so does the prospect of food scarcity. Edible insects present an alternative to our traditional meat sources, many of which require vast inputs of resources to raise.” 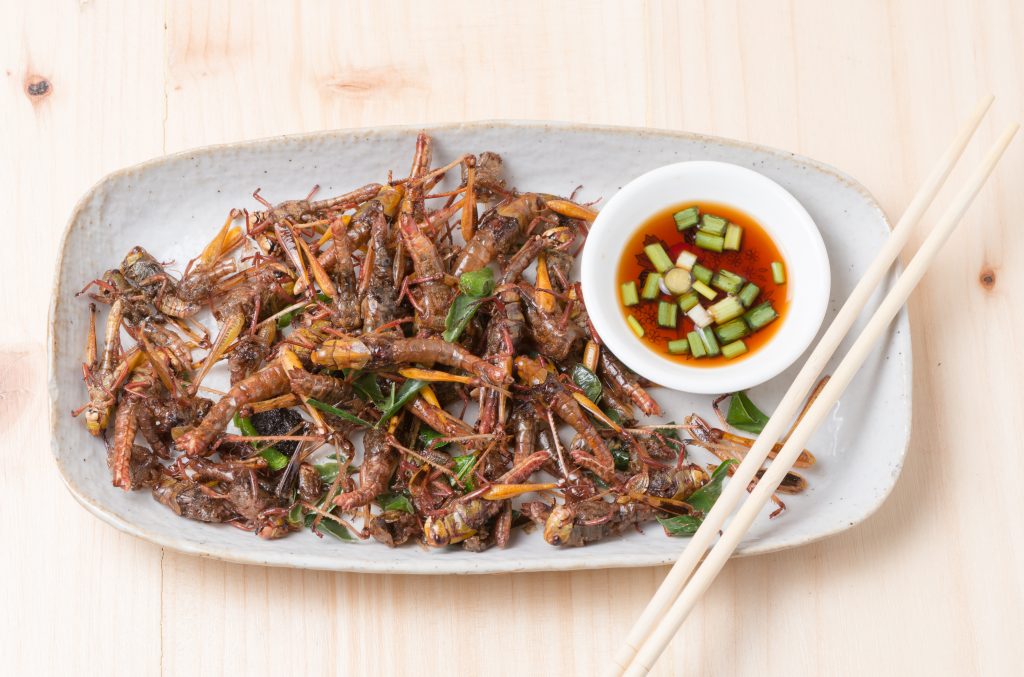 The thought is edible insects might require fewer resources than livestock. Meal worms, for instance, create a carbon footprint that is six to 13 times smaller than beef. Yet open questions remain around the nutritional value of edible bugs. Insects carry the same, if not more, protein relative to meat. That case is pretty much closed. But mineral content is a trickier test.

Nutrient minerals like iron and calcium don’t exist as pure elements in food, but rather they’re baked into a variety of chemical states or compounds. But only some of these compounds are easily absorbed by the digestive system and harnessed by our cells, a property known as bioavailability. For instance, heme — the pigment in the muscles of red meat — can contribute significantly more iron to a human diet than plant sources of the mineral.

But most of this budding — or should I say “bugging” — food industry is unregulated.

Latunde-Dada and her colleagues used to two tactics to gauge the bioavailability of minerals in edible insects, namely grasshoppers, crickets, mealworms and buffalo worms.

The first experiment measured solubility — or how readily minerals from food dissolve in water. Across the board, insects beat sirloin beef, and crickets contained twice as much available iron as red meat.

“They showed these forms of iron were soluble, which means they should be absorbable in the intestine,” said Darna Dufour, a biological anthropologist at University of Colorado Boulder who wasn’t involved in the study. Grasshoppers, crickets and mealworms also topped beef when it came to soluble calcium, copper, magnesium, manganese and zinc.

The study’s second method created an “artificial stomach” that replicated the conditions of a gut in a test tube. It came complete with intestinal cells and harsh acids. The cells absorb nutrients as their digested, which offers an indication of mineral uptake in living tissue. Here, buffalo worms led the way over sirloin beef, while mealworms and grasshoppers had comparable levels with red meat.

The wild west of bug eating 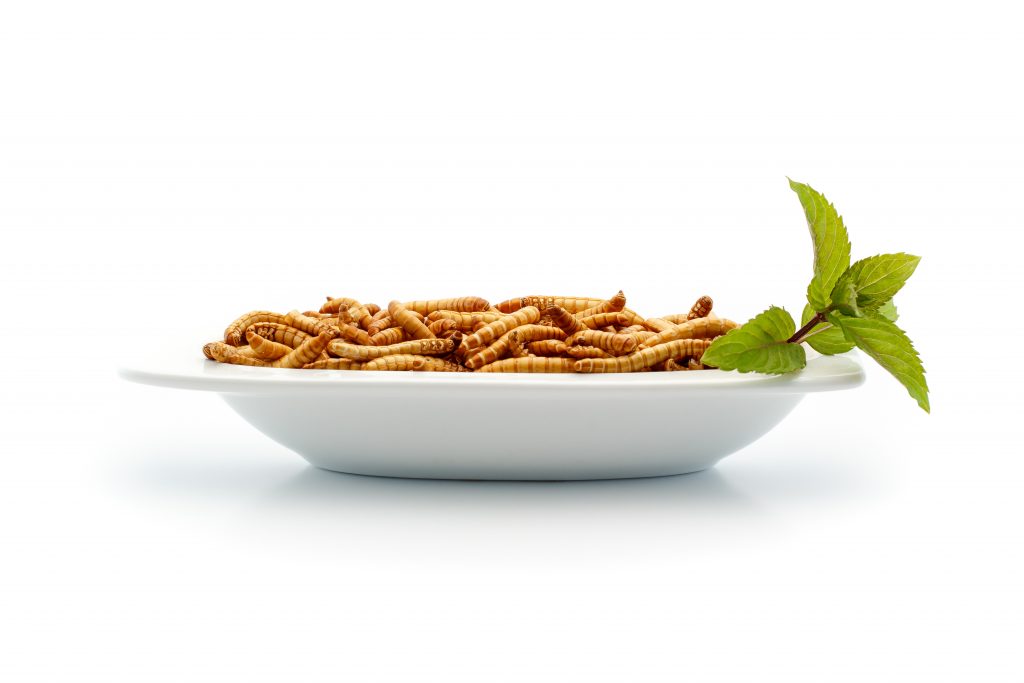 Mealworms aren’t only a good source of iron and other minerals, based on new research, biological anthropologist Darna Dufour said these worms and other larvae can serve as source of fat for malnourished communities. Photo by Phodo Design/via Adobe

Together, the results show commonly consumed insects could be better sources of bioavailable minerals, especially iron, than sirloin. But both Latunde-Dada and Dufour said the finding would require further study with human volunteers.

Such validation may soon become important as the entomophagist — bug-eater — movement grows in popularity. Latunde-Dada enjoys roasted locusts on a regular basis, while Dufour is partial to tasty leafcutter ants. Martin rather partake in the larvae of wax moths, because they taste like pine and mushrooms. Today, there are companies that sell bug-filled energy bars, insect-based flour and even cricket pasta. Martin said millions have invested in these products.

“In 2008, when I started my blog, the concept was still considered totally out there. There were a half dozen people across the U.S. who were actively involved in trying to promote the idea,” Martin said. “Now, less than 10 years later, there are literally hundreds of startups around the world focusing on entomophagy.”

Bugs-as-food still reside in a Food and Drug Administration loophole.

But most of this budding — or should I say “bugging” — food industry is unregulated. For instance, it’s unclear what percentage of the population might be allergic to edible insects or if they can transfer toxins from the environment into people.

“Bugs-as-food still reside in a Food and Drug Administration loophole. No one ever thought they would be intentionally added, so they didn’t plan for it,” Martin said. “The current guidelines essentially say,‘There can’t be too many bugs in your commercial food product,’ but nothing about if bugs ARE the food product.”

With regards to toxins, most commercial products should be fine, Martin said, because the insects are not foraged from the wild, but rather farmed in controlled environment. The FDA also requires other best practices for food production, such as proper labeling and keeping products contaminant-free.

Because the Western world has been slow to take to insects, we don’t yet have a full understanding of the allergies and toxins that could be associated with them, nor do we have research on the proper safety practices we would need for a viable edible-insect industry. As a result, U.S. regulatory agencies haven’t taken a strong stance on the safety of bugs, and that, in turn, has stifled industry growth, according to the U.N.

In other words, when it comes to edible bugs, there’s still a lot to chew on.

Left: Fried crickets may provide twice as much iron as sirloin steak based on new research from King's College London. Photo by catherinelprod/via Adobe.