Can our bodies handle the hyperloop?

Today, in the sunburnt desert north of Las Vegas, a tech firm conducted a demo of a cutting-edge propulsion system. The firm is among a handful of companies and universities vying to build the first hyperloop.

Hyperloop is a futuristic transportation system that resembles a supersized version of a pneumatic tube at the drive-through window of a bank. Here’s how it would work. People hop into a pod, which would travel up to 760 miles per hour inside a tube. That’s a whisker shy of breaking the sound barrier.

Photo by Hyperloop One

This afternoon, a 10-foot-long sled zipped from zero to 60 miles per hour in one second. No tube for now, but the company says that a 200-foot-long one is getting assembled for a full-scale test later this year. Hyperloop One, founded by early Uber investor Shervin Pishevar and former SpaceX engineer Brogan BamBrogan, has raised $100 million to connect Los Angeles and Las Vegas with a hyperloop system by 2018.

That’s a lot of cheddar, but it raises a basic question: Is hyperloop safe?

When Elon Musk, founder and CEO of SpaceX and Tesla Motors, proposed the concept in 2013 as a way to travel between San Francisco and Los Angeles in 35 minutes, it was met with dollops of excitement and skepticism. At the time, WIRED wrote:

THE HYPERLOOP is a totally imaginary transportation device that has captivated entrepreneur Elon Musk, who keeps talking about it. First imagined at least 100 years ago, it would basically look like some version of those green tubes on Futurama.

Imaginary no longer, it would seem. If everything goes according to plan, Hyperloop One’s pods will carry humans and cargo at 760 mph — 30 percent faster than a 747 airplane.

“We’re grandma-friendly, dog-friendly and vomit-free,” said Josh Giegel, Hyperloop One senior vice president of engineering. “The user experience is not going to be all that different from what they’d feel on a conventional airline.”

But extreme speed isn’t the ticket to Puke City. It’s acceleration — those thrilling moments when your body moves from standstill to near Mach 1 — that produce nausea.

Picture taking off in an airplane. The jet engines let loose, pinning you into your seat, straining your muscles and bones. This acceleration is typically expressed as G-force or gravitational force (Technically denoted as “g” but for the sake of easy reading, we’ll use uppercase G).

If you’re standing on a sidewalk or sitting at a desk right now, then you’re experiencing 1 G. Commercial planes submit their passengers to an additional 0.1 to 0.3 Gs during takeoff and landing. But once a plane reaches its constant cruising speed, everyone is basically back to feeling 1 G.

“If you’re traveling at exactly 700 mph, you can drink a Coke, you can do anything you like,” said NASA Ames research psychologist Lee Stone, who isn’t involved with any hyperloop team. “It’s just like being on a bus.” 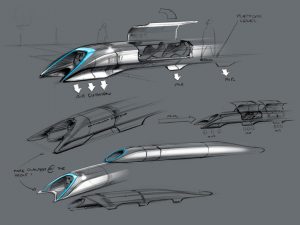 Elon Musk estimated that a San Francisco-to-Los Angeles hyperloop with 40 pods and two one-way tubes could be constructed for $6 billion. If those costs are spread over 20 years, he said the cost of a one-way ticket would be $20. Photo by SpaceX

Hyperloop wants to mimic the experience of an airliner by only inducing an extra 0.1 to 0.3 Gs when the pod starts and stops. The required acceleration would span about two minutes.

So, a passenger would experience airplane-takeoff levels of unease for close to two minutes … that would be the ride’s only discomfort … unless the hyperloop turns.

“Anybody who’s turned a car on a sharp turn at 50 mph knows that you’re pulled sideways in your seat by the centrifugal forces,” Stone said. “The bottom line is the trajectory of the track will also generate G-forces that you have to pay attention to.”

Stone would know. The NASA Ames Research Center has been paying attention to these G-forces since the early 1960s. Their initial work continued military research on the experiences of fighter pilots and America’s first astronauts in the Mercury program. Over the years, the Ames Research Center built a series of giant centrifuges to test how humans and equipment respond to high acceleration. The centrifuges spin a passenger like a merry-go-round. The wildest one engineered by Ames could propel a person at up to 20 Gs or 20 times the normal forces of gravity we experience on Earth.

During the early days of the space program, NASA Ames Research Center built a series of centrifuges to test how the human body reacts to high acceleration during rocket launches. Here, Mercury astronaut Wally M. Schirra, Jr. prepares to undergo testing in the “5 degrees-of-freedom” motion simulator at NASA’s Ames Research Center in July 1963.

Trained humans can handle extreme acceleration. Early astronauts who rode Saturn V rockets into space hit accelerations as high as 4 Gs, Stone said. The Russian-made Soyuz descent capsule, which recently carried home astronaut Scott Kelly, can reach a mind-bending 9 Gs. (Birds like cliff swallows can bank as hard as 7.8 Gs, which tops 6.8 Gs of the toughest rollercoaster on the planet, the Tower of Terror in Johannesburg, South Africa.)

“What shuttle astronauts were typically experiencing on launch was below 2 Gs. Matter of fact, that was part of its design because we wanted to be able to send everyday people into space,” Stone said. “These levels don’t injure you, but once you get above 4 and 5 Gs, it’s significantly challenging.”

Astronauts sit flat on their backs during launch, so all of this acceleration goes directly into their chest.

“Seat angles during launch and during descent are a very hot topic. The G-force will hit straight into your chest, that’s the maximally safe direction,” Stone said. “Because the best thing to do is push all your blood into your back, as long as you’re healthy and not pregnant.”

That’s because, even with optimal seating, excess Gs from turns can cause blood to slosh around inside arteries and veins. For astronauts, blood slides from the front of the body to the back as they lift off. This extreme acceleration makes it difficult to breathe and harder to reach for things. Astronauts are in peak physical health to handle these circumstances, while fighter pilots wear G suits to keep their shifting blood from causing strokes or the loss of consciousness.

Both Hyperloop One and their competitor Hyperloop Transportation Technologies say their final pods would slow down for sharp turns, but by how much remains an open question. The pods might be propelled by magnetic levitation — the same technology used for bullet trains. The top speed of the fastest commercial bullet train, the Shanghai Maglev, hovers around 300 mph. But at this speed, it would require a banked curve with a radius of 4,400 meters to keep passengers from losing their lunch. By comparison, the hardest turns on an Amtrak train require half as much distance. So, unless hyperloop plan on making huge curves or slowing down precipitously, the track will need to be fairly straight.

Emergency stops present similar problems, given rapid deceleration affects the body in the exact same manner as acceleration. As explained in WIRED, if the pod uses magnetic levitation, then a sudden loss of power would simply slow movement until it plops down at zero miles per hour. Hyperloop Transportation Technologies has proposed reverse thrusters to reduce speed. But a sudden stop would be 10 times as bad as a 70 mph car crash.

Outside of the turns and emergency stops, the health ramifications for average people should be non-existent, if the acceleration and deceleration max out at 0.1 to 0.3 Gs, Stone said. He said he knows of no study showing that repeated brief exposure to high G levels causes health issues.

“Some poor businessmen fly every single day of their lives, and so clearly those levels don’t cause any problem,” Stone said.

Left: Hyperloop One wants to transport commuters through a tube at close to the speed of sound, but can regular humans handle it? Photo by Hyperloop One