This Japanese ‘hidden figure’ enlightened the world with her sunspot sketches

During World War II, Tokyo often held drills to prepare citizens for airstrikes. But when the sirens blared and blackouts hit the city, a young Hisako Koyama would sneak back outside with her futon in one hand and a star chart in the other. Those pitch-black nights were perfect for stargazing.

These moments started her lifelong passion for the glimmering sky, and our very own star. Koyama would later spend her entire career inspecting blemishes on the glowing sun. In her observatory, she quietly sketched those sunspots and ultimately produced one of the most influential solar observation collections in the last 400 years.

“Koyama wasn’t intent on becoming a world-famous scientist. She was intent on doing a good job. And that mindset helped her do the extraordinary.”

Without this body of work, astronomers wouldn’t have a contemporary picture of solar activity, nor be well equipped to predict space weather events that could knock out GPS systems and affect other technology.

Koyama’s sun observations and meticulous sunspot drawings shaped solar science and the modern field of space weather, according to a new commentary about Koyama’s work published in the journal Space Weather. With her archive of more than 10,000 hand-drawn sunspot observations, Koyama has joined the ranks of eminent astronomers, such as Galileo Galilei, Johann Caspar Staudacher and Heinrich Schwabe.

“Koyama was a combination of ordinary and extraordinary,” said Delores Knipp, a space weather scientist at the University of Colorado Boulder and lead author of the review. “She went about her daily life doing what she believed was an ordinary, day-to-day job. Koyama wasn’t intent on becoming a world-famous scientist. She was intent on doing a good job. And that mindset helped her do the extraordinary.”

From amateur to pro

Born in Tokyo in 1916, Koyama grew up in a society that didn’t push young women into professional careers. In fact, Koyama graduated from an all-girls high school in the 1930s, which was rare for most girls at the time. 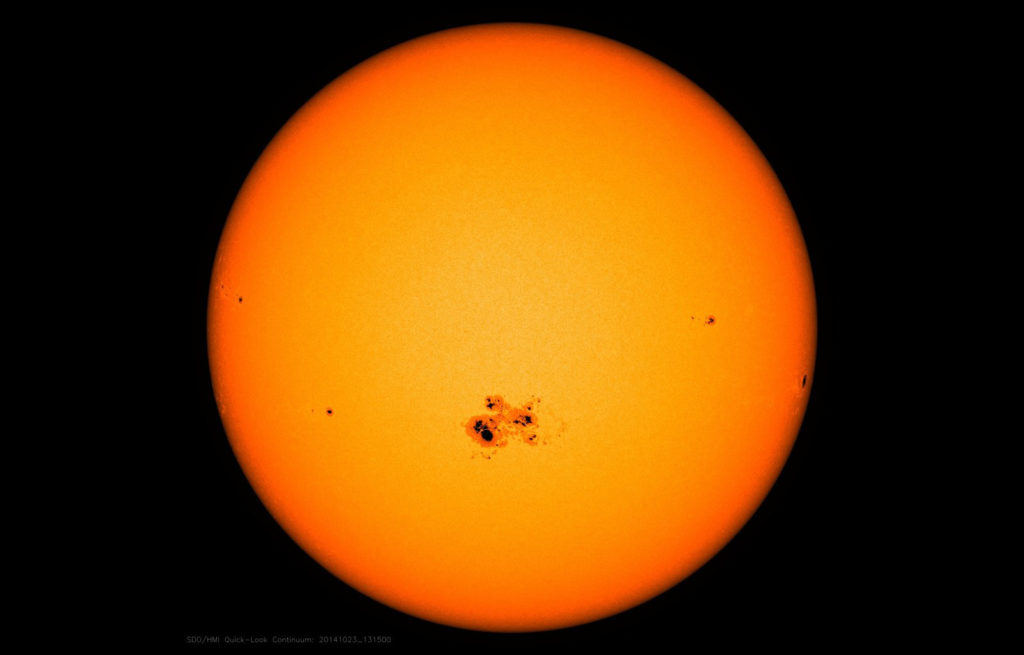 Hisako Koyama spent her entire career inspecting blemishes on the sun, known as sunspots. Sunspots are temporary dark spots that appear on the surface of the sun, where areas of intense magnetic activity lower the sun’s surface temperature. Image by NASA/SDO, October 2014

Koyama was fixated on the sky, and her father nurtured her growing enthusiasm in those formative years. He bought her a refracting telescope, and by 1944, Koyama directed her father’s gift toward the sun. To safely watch the sun’s surface, she would place her small telescope in front of a window and use the telescope to project the sun’s image behind the eyepiece and onto a piece of paper. (The same concept is behind the binocular-based solar viewers used during eclipses).

For a month, she inspected the shining orb this way and finally, with a surprising amount of detail, made her first sunspot observation.

“For a woman of that time, it’s remarkable to have access to that education,” Knipp explained. “But her learning was very much on the job, and she was tenacious as she moved from being an amateur to a professional astronomer.”

After completing her first sketch in her late 20s, Koyama sent it to Japan’s Oriental Astronomical Association’s president, Issei Yamamoto. He encouraged her to continue sun-watching, and Yamamoto took her under his wing in 1945. By spring of 1946, Koyama joined the Tokyo Science Museum (now the National Museum of Nature and Science) and settled in for the long haul.

“Koyama was persistent, particularly with the Japanese male-dominated authority of the time,” said Huixin Liu, a space scientist at Kyushu University’s Meteorology and Solar-Terrestrial Physics Lab and coauthor of the commentary. “She could navigate this unknown terrain and prove herself, which got her accepted by her colleagues in the amateur society and in the professional world.”

How Koyama made a name for herself

Koyama observed the dark specks across the sun’s face on a daily basis. She sat at her observatory peering through a large 20-centimeter refracting telescope — the sole tool of her career — and quickly understood why astronomers relied on this solar phenomenon.

Sunspots temporarily appear when there is high magnetic activity in a concentrated area on the sun’s surface. The temperature in those places are cooler, and the spots produce less light than the rest of the surface. The sun goes through an 11-year solar cycle, and sunspot numbers fluctuate at the cycle’s end. Scientists track sunspots because they predicate solar activity like solar flares, which can mess with satellite communications around the Earth.

Watching for sunspots is a constant endeavor, and hand-drawing each blemish can get exhausting. But Koyama promptly returned every day for more than 40 years.

“She continued her observations on hot summer days and on cold winter days,” Toshihiro Horaguchi, senior curator of astronomy at the National Museum of Nature and Science, said via email. “She established her method of observation first, and kept it faithfully as long as she could.”

Hisako Koyama hand drew sunspots every day for more than 40 years. This visual shows each drawing from December 1978. Image by the National Museum of Nature and Science in Tokyo

Horaguchi read about Koyama in school, but they didn’t meet until he started working at the museum 26 years ago. She had retired by that point, but she couldn’t resist staying away from the museum and from budding astronomers, whom she often mentored. Koyama worked until 1981 and continued to visit the museum as a fellow for another 10 years.

“She was very gentle and mild — like a grandmother to everyone. [Yet] she was scrupulous; each observation may be simple, but the accumulation is incomparable,” Horaguchi said.

Part of Koyama’s day, both when she worked and after retirement, was sharing her growing collection of drawings and educating museum-goers about space. She would host amateur astronomy events, teach on holidays and write articles in astronomical journals to share her work.

“She was a good messenger between professional astronomers and amateur astronomers,” said Hisashi Hayakawa, an environmental and science history research fellow at Osaka University and a coauthor of the paper. “Her educational skills were quite high, and because of her experience as an amateur, it was easier for amateur astronomers to relate to her.”

In 1985, Koyama pulled together her more than 10,000 drawings from 1947 to 1984 and published a book called “Observations of Sunspots.” To date, solar scientists have archived and reconstructed her work, providing a greater understanding of how solar activity influences the Earth. 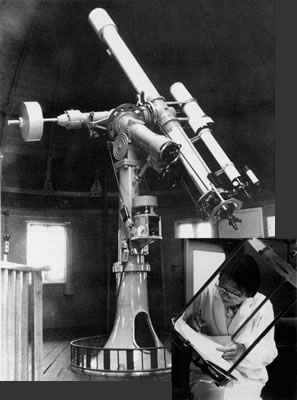 This is Hisako Koyama’s observatory, which housed a 20-cm telescope with an overlay reproduced from Koyama’s published book ‘Observations of Sunspots.’ Image provided by Kawade Shobo Shinsha Publishers

“She made almost 50 years of straight observation, which is the ‘backbone’ of modern sunspot study,” Hayakawa explained. “Koyama knew how to express the latest details to both amateurs and professionals, and her book is a good example.”

Inspiring future Koyamas around the world

Koyama passed away in 1997, leaving a lasting impact. She played a big role in showcasing amateur astronomy and instilling the importance of citizen science in Japan. “Young Japanese girls still sometimes feel they can’t become professionals. Koyama can encourage these girls who want to achieve something or make contributions to science, even if they’re learning on their own or supporting themselves at first,” Liu said.

Now, Koyama’s story is beginning to spread as astronomers pass around recently reconstructed sunspot observations since the 1700s while also highlighting her large collection. And Knipp hopes reviving her archive and sharing this story will continue to shine light on Koyama’s work in the international professional and amateur astronomy spheres.

“Koyama deserves some long-overdue recognition,” Knipp said. “And her story transcends boundaries. All young girls have the potential to become future Koyamas and achieve their dreams.”