Japan’s Earthquake and Tsunami: How They Happened 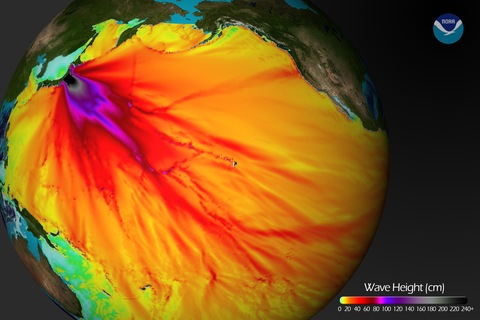 The 8.9-magnitude earthquake that struck coastal Japan on Friday, devastating large swaths of the coast and spawning a powerful tsunami, was caused by the Pacific tectonic plate thrusting underneath the country, and forcing the seabed and ocean water upward.

Japan sits on or near the boundary of four tectonic plates: the Pacific, North American, Eurasian and Filipino plates.* These massive slabs of earth’s crust are endlessly creeping, slipping, locking up and then jolting again. In fact, the Pacific plate has been inching its way under the North American plate at a rate of 80 to 100 mm a year, said John Bellini, a U.S. Geological Survey geophysicist.

As these plates butt into each other, pressure builds and builds. Then, very unpredictably, that pressure releases. The release of such tension causes earthquakes, and the sudden lifting of the seabed triggers the tsunami.

“Japan is one of the most seismically active areas in the world,” Bellini said. “Plates aren’t constantly moving at a smooth rate. Some areas will be creeping slightly, but it’s not always enough to relieve all the stress. The stress builds up over time — over years, decades and centuries, and then at some point it overcomes the lock between two parts of the crust. When that happens, you have an earthquake.”

Friday’s biggest quake occurred 80 miles offshore and 15.2 miles underwater in a subduction zone called the Japan Trench, part of that plate boundary. For more than a minute, the crust ruptured, stretching 180 miles long.

The resulting earthquake was about 1,400 times stronger than the 6.9 magnitude Kobe earthquake that killed more than 5,000 people and injured 26,000 in 1995, said Emily So, a USGS research civil engineer. The shaking was so great that it was felt as far away as Tokyo, which is 230 miles from the quake’s epicenter.

In fact, the earthquake generated roughly the amount of energy that the U.S. consumes in a year, said David Wald, as seismologist with the National Earthquake Information Center at USGS.

“Bear in mind that this area is prone to earthquakes, but this is one of the largest they’ve had,” So said. “We will be expecting aftershocks, maybe for days, months and years.”

“Twenty magnitude 6 earthquakes is a remarkable number, but expected for an earthquake of this size,” Wald said.

The upward thrusting of the seafloor contained enough energy to displace an enormous amount of water, churning up huge waves that swept across swaths of the Japan coast and tore across the open ocean at the speed of a jet plane.

“Out in the open ocean, the waves can be hundreds or even thousands of miles long,” said Bruce Parker, a Stevens Institute of Technology Professor, and author of the book, “The Power of the Sea.” “The deeper the water, the longer the wavelength, and as soon as the water gets shallower, the wave gets shorter and higher.”

They move as fast as 400 miles per hour, he added. Tsunamis are tracked using sensors out in the ocean, such as Deep-ocean Assessment and Reporting of Tsunamis (DART) buoys, which track pressure and movement and send information by satellite back to the Pacific Tsunami Warning Center.

Unlike a normal surfing wave, which curls over from the top, but is quiet underneath, a tsunami moves from top to bottom toward the shore, bulldozing everything in its path. As it moves toward the land, it shortens in length, but rises in height. “It’s only when it gets into shallow water that it steepens and lifts up, and that’s when it turns into a tsunami,” Parker said.

Editor’s note: this post has been updated to clarify the number of tectonic plates under or near Japan.