John Glenn, the first American to orbit the Earth, dies at 95

John Glenn, NASA astronaut, U.S. Senator and the first American to orbit the planet, died Thursday at a hospital in Columbus, Ohio. He was 95.

Born in Ohio in 1921, Glenn gained his first flight experience as a highly decorated Marine pilot in World War II. He went on to serve in the Korean War, and, in 1957, set a transcontinental speed record by flying from Los Angeles to New York in 3 hours and 23 minutes as a military test pilot.

“He was one of the nicest men I’ve ever met…he had a great way with the people,” said NewsHour’s science correspondent Miles O’Brien, who knew him personally and flew Glenn once in his airplane. “He had all the right stuff that astronauts and test pilots have. He was last of the great American heroes.”

In a 2012 speech at Florida’s Kennedy Space Center, Glenn recalled the enduring bond he’d forged with the other U.S. astronauts. “That was a real team that was put together back in those days,” Glenn said. “Never was there anything any more tight than the brotherhood we had that supported each one of those flights.”

At the time, NASA was racing the Soviet Union for supremacy in space technology. The USSR successfully launched the first satellite, Sputnik 1, in 1957 and put the first human in orbit, Yuri Gagarin, in 1961.

But Glenn’s moment came on February 20, 1962. That day, he squeezed into the tiny Friendship 7 spacecraft and piloted the craft around the planet three times at speeds of up to 17,000 miles per hour before splash-landing in the Atlantic Ocean. 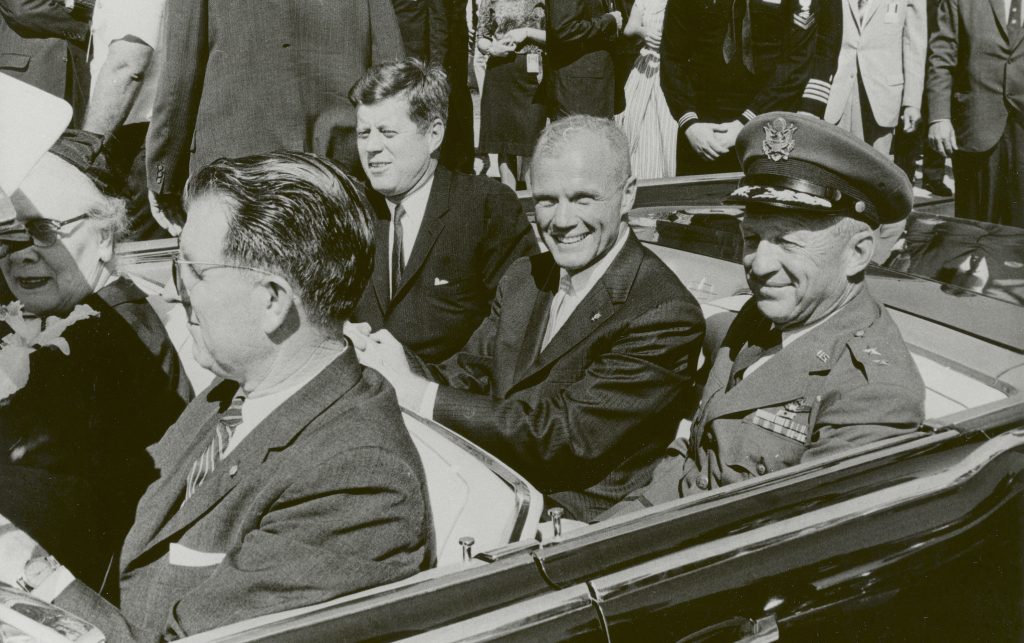 While a success, the flight was not without drama. While the world watched, flight controllers worried that a loose heat shield would cause Glenn’s capsule to burn up upon re-entry. NASA modified Glenn’s re-entry procedure to ensure a safe return, but it was later discovered that the alarm had been triggered by a faulty indicator.

In a 2012 PBS NewsHour interview with Judy Woodruff, Glenn said that pre-flight preparations had been key to keeping his cool during the emergency.

“You don’t train for a normal mission where everything goes okay,” he said. “You just keep working through as you are trained to do, and mainly keeping the attitude of the spacecraft exactly where it should be, so that you get the maximum protection from the heat shield.”

Suddenly a national hero, Glenn was feted with a ticker tape parade in New York City. President John F. Kennedy awarded Glenn the Space Congressional Medal of Honor, and on February 26, 1962, the astronaut addressed a joint session of Congress.

“This has been a great experience for all of us on the program and for all Americans, I guess, too. And I’m certainly glad to see that pride in our country and its accomplishments are not a thing of the past,” he said at the time.

“I think if we can help some of these events of the past bring alive experiences for our young people today, where we whet their interest in science and technology and engineering and math, it will all be well worthwhile.”

Glenn resigned from NASA in January 16, 1964 and announced his candidacy for the Ohio Senate seat in the U.S. Congress the following day. His initial bid failed though when an accident forced Glenn to pull out from the race early.

Glenn worked as an executive for Royal Crown Cola for nearly a decade before being successfully elected as a democratic Senator from Ohio in 1974. During his 25 years on Capitol Hill, Glenn focused on government affairs and weapons controls and was chief author of the Nuclear Non-Proliferation Act of 1978. Glenn even ran in 1984 for the Democratic presidential nomination. But after a poor showing in early primaries, he withdrew his bid. 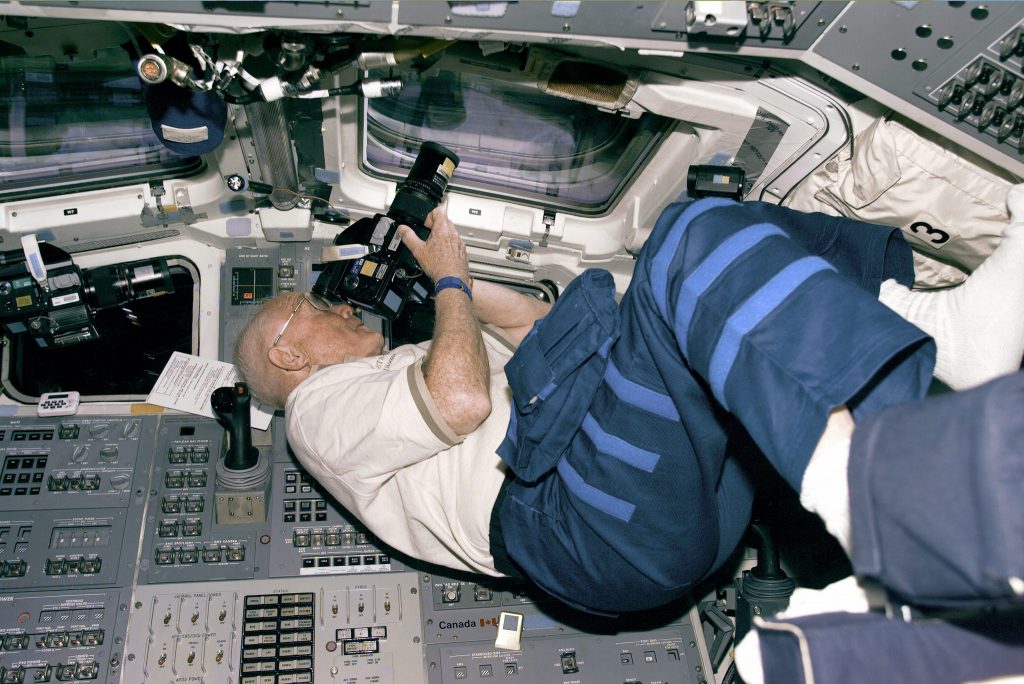 But 36 years after his first flight, space — and NASA — beckoned Glenn again. In 1998, he blasted off aboard the space shuttle Discovery as part of a mission to study space’s impact on elderly bodies. The flight gave him yet another record, the oldest person ever to fly in space.

Glenn continued to serve in the Senate until 1999. In the years that followed, Glenn and his wife Annie established the John Glenn College of Public Affairs at the Ohio State University in Columbus. Longtime supporters of the university, the couple famously dotted the “i” in the Ohio State Marching Band’s traditional football formation in 2009.

Glenn was awarded the Congressional Gold Medal that same year and the Presidential Medal of Freedom in 2012.

“I think if we can help some of these events of the past help bring alive some of those experiences for our young people today,” Glenn said when asked by Judy Woodruff what it means to him to be seen as a hero, “where we whet their interest in science and technology and engineering and math, it will all be well worthwhile.”

Mark Scialla and Laura Santhanam contributed to this report.