NASA’s Juno spacecraft arrived successfully at Jupiter at 11:53 p.m. EDT Monday, becoming only the second probe in history to orbit our solar system’s largest planet. The probe survived a hazardous four-day final stage that required flying within 3,000 miles of the planet’s clouds and sliding through the intense radiation belts.

“This is the one time I don’t mind being stuck in a windowless room on the night of the 4th of July,” Scott Bolton, principal investigator of Juno from Southwest Research Institute in San Antonio, said in a statement. “The mission team did great. The spacecraft did great.”

The orbital insertion completed a five-year, 1.7 billion mile journey, which at one point brought the probe just 311 miles above Earth in a slingshot maneuver needed to reach the top speed of 165,000 miles per hour. 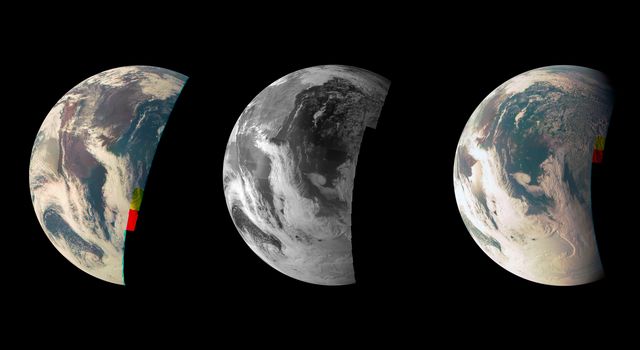 Views of Earth from JunoCam during the Earth flyby gravity assist maneuver in October 2013. Photo by NASA/JPL-Caltech/MSSS

The mission encountered the most severe bout of radiation by crossing over Jupiter’s north pole just an hour before reaching orbit. At this northern expanse, electrons moving at near the speed of light bombarded the spacecraft, but the probe’s titanium shield held firm and protected its essential instruments from damage.

The basketball court-sized probe will spend the next two days catching its breath, so to speak. All scientific instruments were switched off during the last five days of the approach. This state will continue for another two days, at which point, the instruments will switch on to assess if they survived the trip. The probe’s gadgets will collect preliminary observations during this early stage, though Juno’s official science mission doesn’t begin until October.

Juno will circle Jupiter for the next year and a half, traveling over every latitude of the planet. It will scan for signs of a solid planetary core, measure Jupiter’s intense magnetic field, look for traces of water and ammonia deep inside the atmosphere and document the planet’s auroras (northern and southern lights).

After 37 orbits around Jupiter, Juno will descend into the planet’s atmosphere on Feb. 20, 2018, where it will burn up.

Left: This is the final view taken by the JunoCam instrument on NASA's Juno spacecraft before Juno's instruments were powered down in preparation for the spacecraft orbiting Jupiter on July 4. Photo by NASA/JPL-Caltech/SwRI/MSSS