The U.S. Army Corps of Engineers released a study Monday on how best to keep the invasive species Asian carp from overwhelming the Great Lakes and threatening the area’s multi-billion dollar fishing industry. Ash-har Quraishi of WTTW Chicago reported in 2012 how fishermen and scientists were catching the fish in an attempt to keep the invasive species’ population in check. Video by WTTW

The U.S. Army Corps of Engineers released a long-awaited study Monday that listed options on how to best keep the Great Lakes’ waterways clear of Asian carp, an invasive species that has threatened the region’s $7-billion-a-year fishing industry and the mid-country ecosystem since the 1990s.

The Corps’ study — the Great Lakes and Mississippi River Interbasin Study, GLMRIS — offered eight options on preventing 13 invasive species — including varieties of Asian carp — from transferring between the aquatic pathways of the Great Lakes and the Mississippi waterways. Congress authorized the Corps to conduct its study in 2007.

The proposal includes a “No New Federal Action” option that requires no additional cost and relies on the existing electric barrier between the Mississippi River and Lake Michigan that has been, for years, the last line of defense against the Asian carp.

Half of the other options cost at least $15 billion. The most expensive option, topping $18 billion, calls for a physical barrier between the lakes and the Mississippi River basins and would take 25 years to complete. The study explains that two new reservoirs and tunnels would be needed to manage the flooding risks resulting from this option.

The completed project times for almost all the options are 25 years. Several of the other options suggest physical barriers at different locations. The study refrains from recommending any one option. 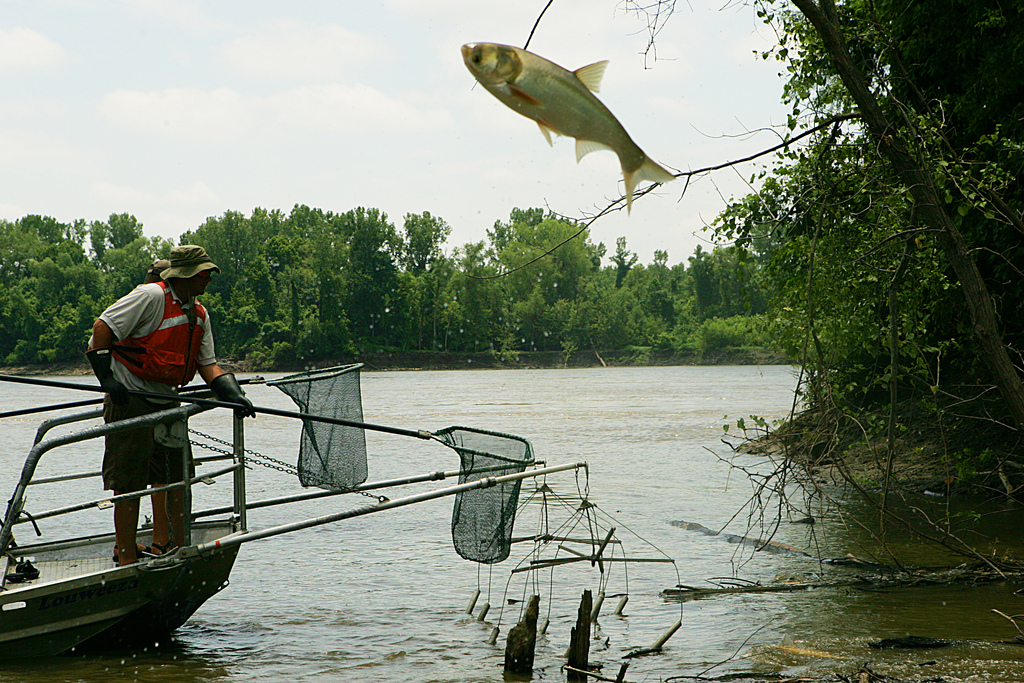 At the Big Muddy National Fish & Wildlife Refuge in Missouri, an Asian carp jumps high out of the water to escape biologists’ nets. Photo by Steve Hillebrand/USFWS

Asian carp are native to China and were first introduced to the U.S. in the 1970s to control algae build-up at sewage treatment plants in the South, the USGS said. The Asian carp escaped into the Mississippi River and its tributaries and eventually made their way up north to Midwest waters.

Of the four Asian carp species, the most feared culprits include the silver carp — which can weigh as much as 60 pounds and are known for rocketing out of the water — and the non-flying bighead carp, which can swell to 100 pounds in size. Asian carp are ravenous creatures that reproduce quickly and consume between 20 to 120 percent of their body weight in plankton each day, according to the U.S. Geological Survey.

A 2012 U.S.-Canadian study concluded that as few as 10 mature females and even fewer males could establish a foothold in the lakes that crowds out the native fish populations. The U.S. Army Corps of Engineers also reported in December that, while there’s no evidence that the invasive fish are bypassing the electric barriers, Asian carp can still evade the electrical field with the help of passing vessels.

“Initial findings indicate that vessel-induced residual flows can trap fish and transport them beyond the electrical barriers, and that certain barge configurations may impact barrier electric field strength,” the report said. “Additionally, the preliminary DIDSON, dual-frequency identification SONAR, findings identified the potential for small fish, between two to four inches, to pass the barrier array in large groups, or schools.”

USGS research also confirmed in October that the grass carp, a species of Asian carp, were found living and breeding in the Sandusky River in Ohio as “the result of natural reproduction within the Lake Erie basin.” If grass carp reach high densities in the area, the report said, it could disrupt early development of native fish populations.

More troubling, finding the less-aggressive grass carp in the Great Lakes watershed is “an indication that other species of Asian carp — silver, bighead and black carp — might be able to reproduce there,” the report said.

Three bighead carp were caught in Lake Erie in the 1990s, but dismissed as accidents, The New York Times reported. Bone analyses years later revealed that the fish had apparently lived in the lake for several years. The Times also reported that Asian carp DNA was found in Lake Michigan last year, although the source of said DNA remains unclear.

As a means to curtail the species’ upward migration into the Great Lakes,
Ash-har Quraishi of WTTW Chicago reported in 2012 that scientists and fisherman took to catching and marketing Asian carp, hoping to change a nuisance into a lucrative business for commercial fishermen.

Should you wear mask in public if not sick with coronavirus?

Those without broadband struggle in a stay-at-home nation

Businesses may get COVID-19 relief loans as soon as Friday

A snapshot of the coronavirus pandemic’s impact on working families

By Daniella McCahey, The Conversation

Calls mount to close Grand Canyon after resident gets virus