Wheels Stopped for Kepler, but Still More to Study 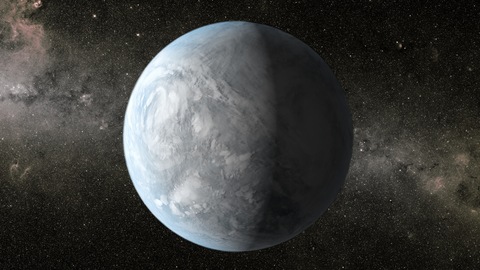 This artist’s concept depicts Kepler-62e, a super-Earth-size planet in the habitable zone of a star smaller and cooler than the sun, located about 1,200 light-years from Earth in the constellation Lyra. It was discovered by the Kepler spacecraft. Image by NASA Ames/JPL-Caltech.

NASA’s Kepler planet-hunting telescope has found more than 2,700 possible exoplanets since it first launched on March 6, 2009. It taught us that beyond our solar system, our galaxy is crawling with exoplanets. And last month, it found two Earth-sized exoplanets possibly existing in a habitable zone — a region neither too scalding nor too frigid to prevent life.

Earlier this month, NASA reported that Kepler had gone offline, and was in “safe mode.” In other words, the failure of one of its reaction wheels — the second to go bad in the last year — had derailed the spacecraft. The reaction wheels are a crucial component of the $600 million telescope. They precisely point it toward far flung planets and stars. 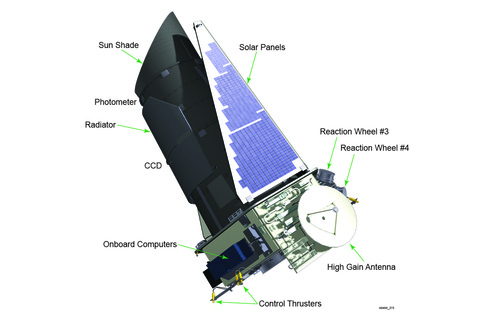 This diagram of the Kepler spacecraft shows the location of two of the four reaction wheels that control the pointing accuracy of the vehicle. Reaction wheel 4 failed on May 11, 2013. Image by Ball Aerospace.

A failed maneuver from mission control was “a clear indication that there has been an internal failure within the reaction wheel, likely a structural failure of the wheel bearing,” according to the mission website.

Engineers for the Kepler team in California say they are making plans to repair the telescope and revive the mission. But according to this Science News article, “they admit that a fix is a long shot.”

Here’s a lovely excerpt on Kepler from Nature:

NASA’s Kepler spacecraft is not only the most prolific exoplanet detector ever; it is — or was — a marvel of engineering. Its 1.4-metre mirror funnels starlight to a 95-megapixel camera, capable of discerning dips in brightness as small as 10 parts per million — clues to the mini-eclipses caused by an exoplanet crossing the star’s face.

Even if this latest blow means an end to the telescope and data collection, the Kepler team says, the mission has so much data on the ground still waiting to be analyzed, “and the string of scientific discoveries is expected to continue for years to come.”

“Tar-sands oil is not really oil, at least not in the conventional sense of the word. It starts out as semi-solid and has to be either mined or literally melted out of the ground. In either case, the process requires energy, which is provided by burning fossil fuels. The result is that, for every barrel of tar-sands oil that’s extracted, significantly more carbon dioxide enters the air than for every barrel of ordinary crude–between twelve and twenty-three per cent more.”

Patti Parson and David Pelcyger contributed to this post.