Scientists discovered a fossil in northeast China that reveals a new species of dinosaur. The four-winged, four-foot Changyuraptor is the largest of its kind to date, and joins a handful of other microraptorines that lived 125 million years ago.

The study, published Wednesday in the journal of nature communications, was led by Luis Chiappe — a paleontologist at the Natural History Museum of Los Angeles County. 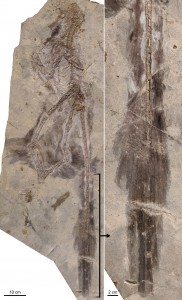 Changyuraptor with (right) details of
plumage. Photo by Luis Chiappe/NHM

The species’ tail feathers have been the subject of great interest. At one foot long, the feathers make up 30 percent of the dinosaur’s length, an unprecedented ratio. The findings suggest that birds evolved from dinosaurs and inherited flight from them, which supports the theory that flight pre-dates birds.

“I’ve worked for over 20 years in China, and I’ve never seen anything like this,” said Chiappe.

With two sets of wings and an estimated weight of four kilograms, the Changyuraptor is twice as heavy as other microraptorines. The fossil leads the scientists to believe its lengthy feathered tail helped sustain aerial stability, a more difficult achievement for larger body sizes.

Alan Turner of Stony Brook University, a researcher on the project, claims the dinosaur’s flight was not like typical birds today.

“Animals like Changyuraptor were probably not engaged in powered flight like modern birds,” said Turner. “This does raise the possibility they could glide or ‘fly’ in a primitive sort of way. The way I like to think of it is: if you pushed them out of a tree, they’d fall pretty slowly.”