In the early days of the Gulf of Mexico oil disaster, estimates varied wildly on the amount of oil gushing from the blown-out well.

As spring turned to summer and the oil kept flowing, the government revised its calculations. And then revised them again — each estimate higher than the last. 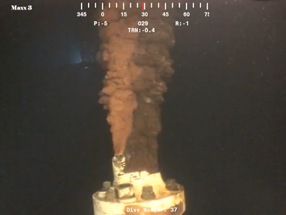 But on Thursday in the journal Science, Timothy Crone, a marine geophysicist from Columbia University’s Lamont-Doherty Earth Observatory, released another estimate. His study analyzed the oil from the time the rig exploded, until the well was finally crammed with mud and a mile of cement, sealing it for good.

These latest numbers are slightly higher than the daily estimates provided by the Flow Rate Technical Group, a government panel appointed to measure the spill. But Ira Leifer, a marine scientist at University of California, Santa Barbara’s Marine Science Institute and a member of the panel, says the distinction is meaningless.

It was in May when Crone first got his hands on an underwater video that was high enough in quality that he could apply his own technique to measure the flow rate. At the time, the government had estimated that the flow rate was at least 504,000 to 798,000 gallons a day. Using a method he’d developed to study underwater volcanoes, Crone provided estimate three times that size: 2.1 million to 2.9 million gallons a day. This latest estimate narrows his earlier numbers, he says.

“My estimate had come out in May, and their estimate slowly changed and became closer and closer to mine, until theirs in effect confirmed mine,” Crone said. “They really confirmed each other.”

To measure the spill, Crone and coauthor Maya Tolstoy, also a marine geophysicist from Lamont, relied on a technique called optical plume velocimetry that they normally use to measure hydrothermal vents: superhot jets of water, heated by magma, that gush from cracks in the seafloor. By using a computational algorithm that breaks the video image down pixel by pixel, they were able to determine the velocity of the oil.

“You’re measuring the velocity times the area of the opening,” Tolstoy said. “That gives you a flow rate. And the flow rate will give you barrels per second.”

Liefer says that estimates taken from these video images still lack vital information. “Basically, no measurements were made of what happened interior to the plume,” he says. “So you only know the surface. Then you have to make educate guesses or assumptions about what happens inside.” The degree of uncertainty, he adds, reinforces the need for monitoring equipment to be installed around deepwater oil wells.

Crone said he addressed these questions in his paper. Namely, he says, they were unable to measure how the rate might have changed over time due to variations in pressure and changes in the shape of the wellhead.

“I think this paper should be viewed as sort of a proof of concept and a preliminary estimate, essentially showing this can be done,” Crone said. “Future work can narrow the uncertainties.”