In 2011, I did a piece for the NewsHour called “Bionic Bodies.” It was story with a lot of ambition and many moving parts (literally). It touched on technology designed to allow paraplegics to walk, deaf people to hear, blind people to see and amputees to be fitted with limbs that could match – or even improve upon – the extremities they’ve lost.

The report bought into a key notion, that the marriage of biology and engineering has brought us to the cusp of creating truly bionic individuals – part human and part machine – who would be endowed with superhuman capability.

Looking back on it now, one year after losing my left arm in a freak accident, I confess to writing a script that was probably a little too sanguine about the state of play at the intersection of prosthetics, robotics, neuroscience and biology.

Losing an arm offers a poignant (and potentially tragic) case in point on the limits of technology, or more optimistically, the marvel that is the human body. 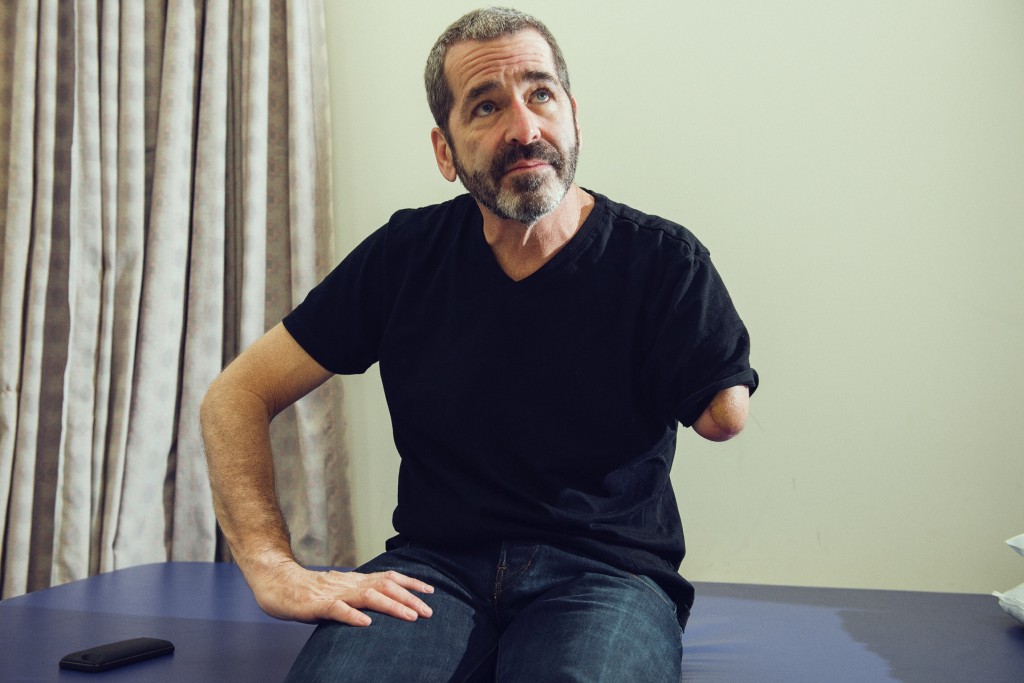 Miles O’Brien doing physical therapy after losing his left arm in an accident a year ago. Photo by Chris Anderson

In an early meeting with my rehabilitation team, one of the doctors told me: “You need to forget the idea that you’ll find a replacement for your arm.” It was not easy to hear that. I felt like giving him a link to my story, but of course, I knew that he knew better than I.

It is best to think about the task at hand (if you will) and determine if it can be done “mono-mano,” perhaps with some adaptive or assistive gadget. I often go about my day without a prosthetic, because it is hot and uncomfortable and thus not always attached to my stump. 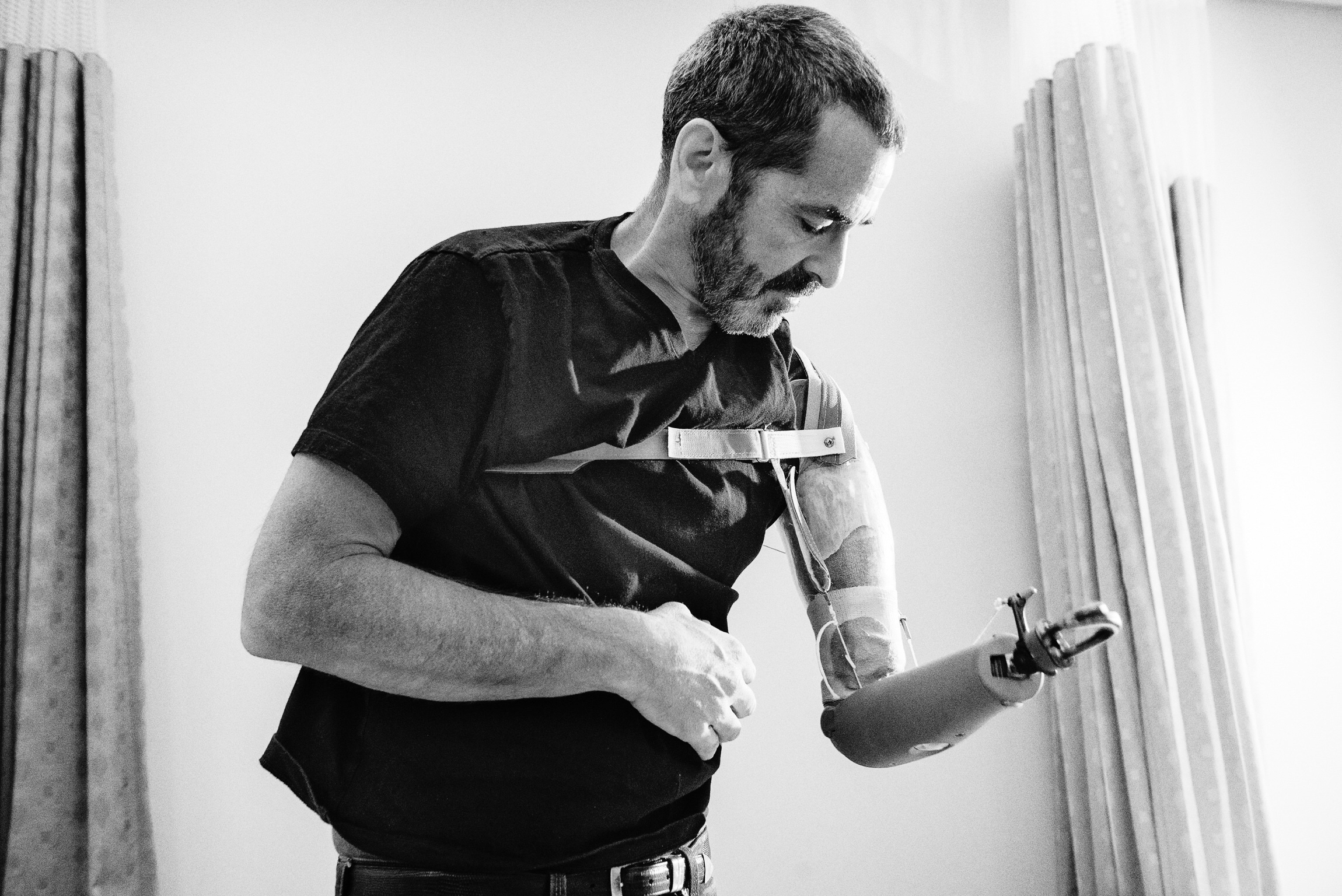 Miles operating his body powered prosthetic at the Medstar National Rehabilitation Hospital in Washington. The technology is not state-of-the-art, but the device is very rugged and reliable. Photo by Chris Anderson

So I’ve spent the last year going through my activities of daily living (ADLs) in problem-solving mode. With some creative thinking, I have figured out how to do almost everything with one hand. Try it yourself some time. You might be surprised how much you can get accomplished. Here’s what I do:

In the bathroom, I stick my toothbrush between my legs to put on the toothpaste. Getting dressed, I button my shirt and tie my tie and shoes with one hand. In the kitchen I use a cutting board with suction cups, spikes and walls to hold my bagel firmly as I butter it. When cooking, I use a sticky material called Dycem to hold bottles, jars and plates in place.

While I’m working, I try not to type too much – instead relying on dictation software to do my writing. I used to use a headset to talk to sources on the phone and type out notes as they spoke. Now I’ve returned to taking notes by hand. Later, I dictate those notes into my computer. 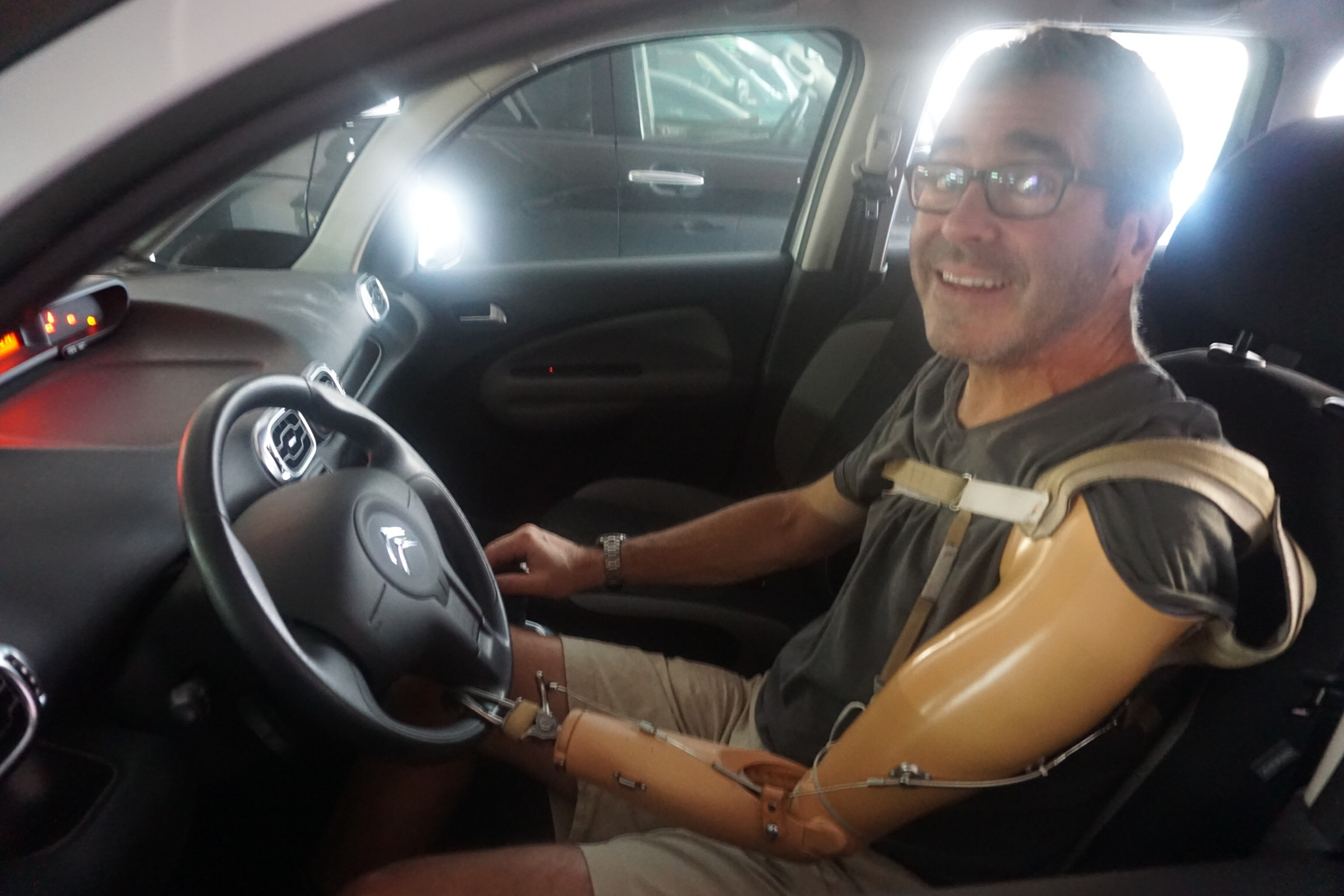 To drive a car with one arm, I tilt the steering wheel down as low as possible so that my thigh can easily reach it. It can hold the wheel steady or provide some friction as I’m steering through a turn. But I have found my prosthetic arm is very useful clamped on the steering wheel when I take a long road trip.

After numerous attempts, and a lot of road rash, I discovered a prosthetic limb ideally suited for bicycling is mandatory.

And when I’m on assignment, shooting the story, the prosthetic is also required to hold the camera steady and to set up the lights and tripod.

There are two lessons in all of this for me: First, I have a very keen appreciation for the capability and flexibility of the human hand, not just because one is gone, but also because of how much I can do with the one that remains. All I usually need is simply some way to hold an object in place.

Second, technology can often dazzle us into thinking there are “silver-bullet” solutions, but it seldom delivers on the promise. That’s an important lesson for an amputee and for a science and technology reporter as well. 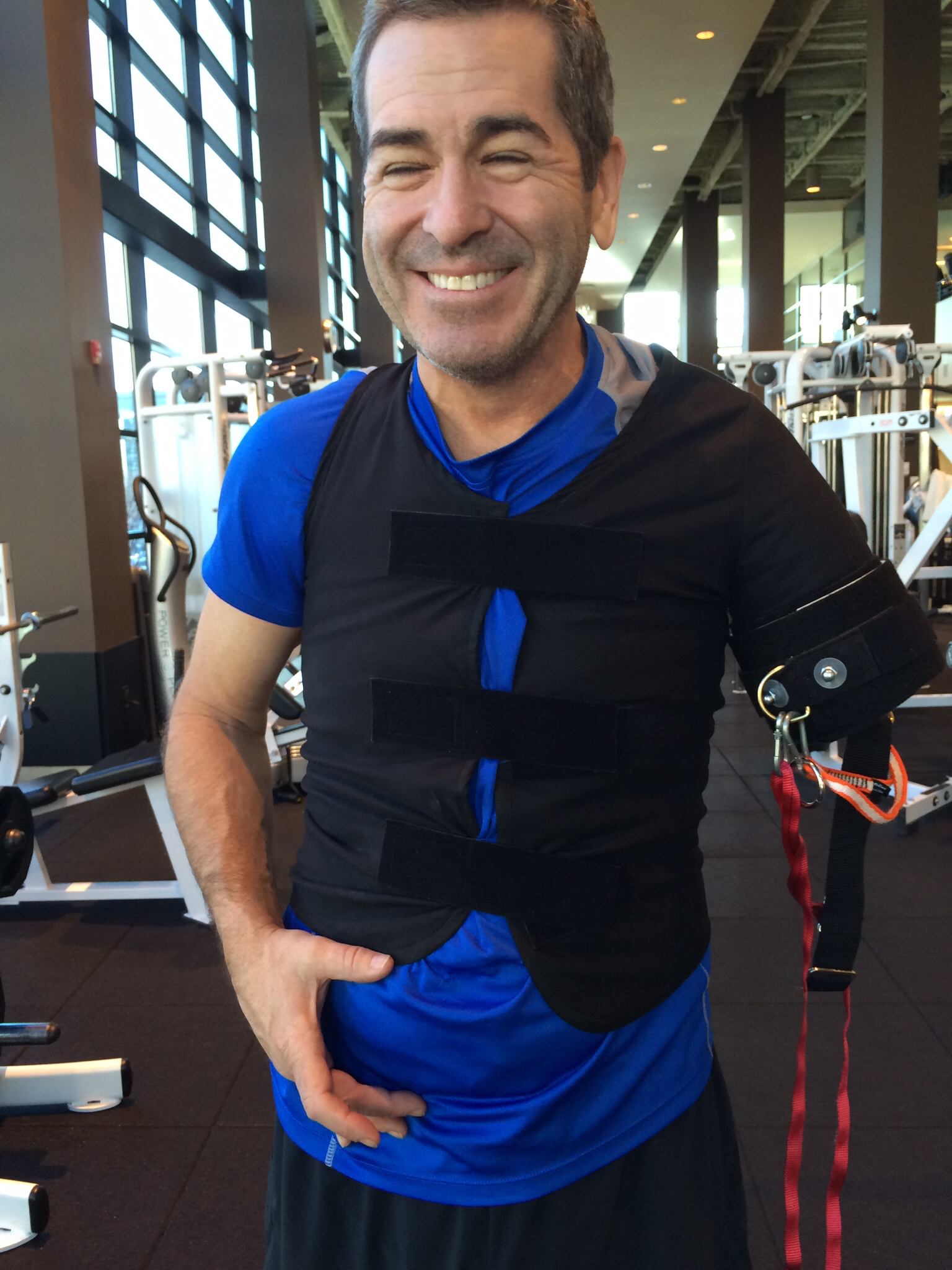 Miles working out with a prototype “Baker Rig” in development by a company called Adaptable Products. The device allows above elbow arm amputees to do weight training on the side of their body missing the limb. Photo by Suzi Tobias 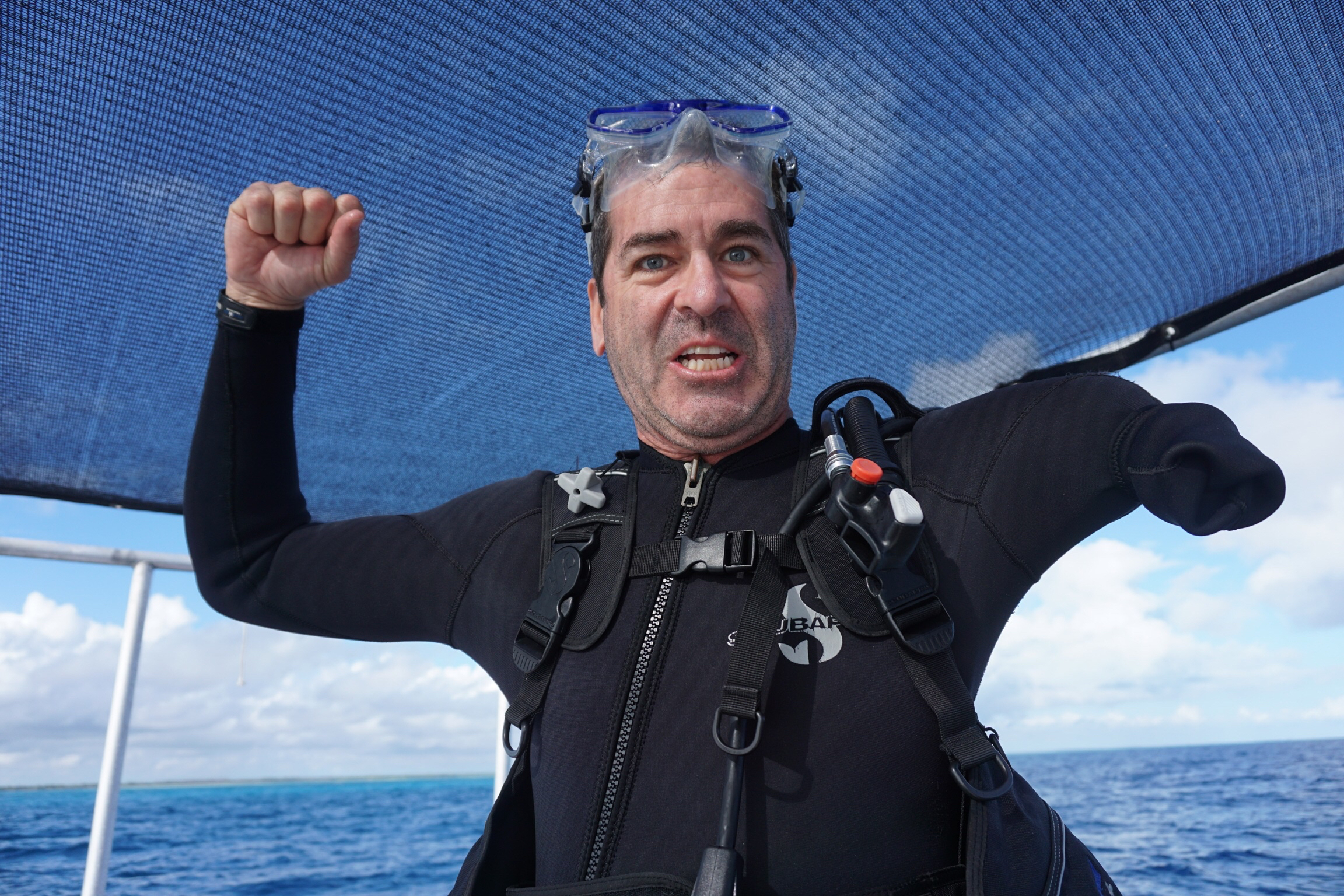 Scuba diving off Andros Island, the Bahamas in January. Photo by Suzi Tobias 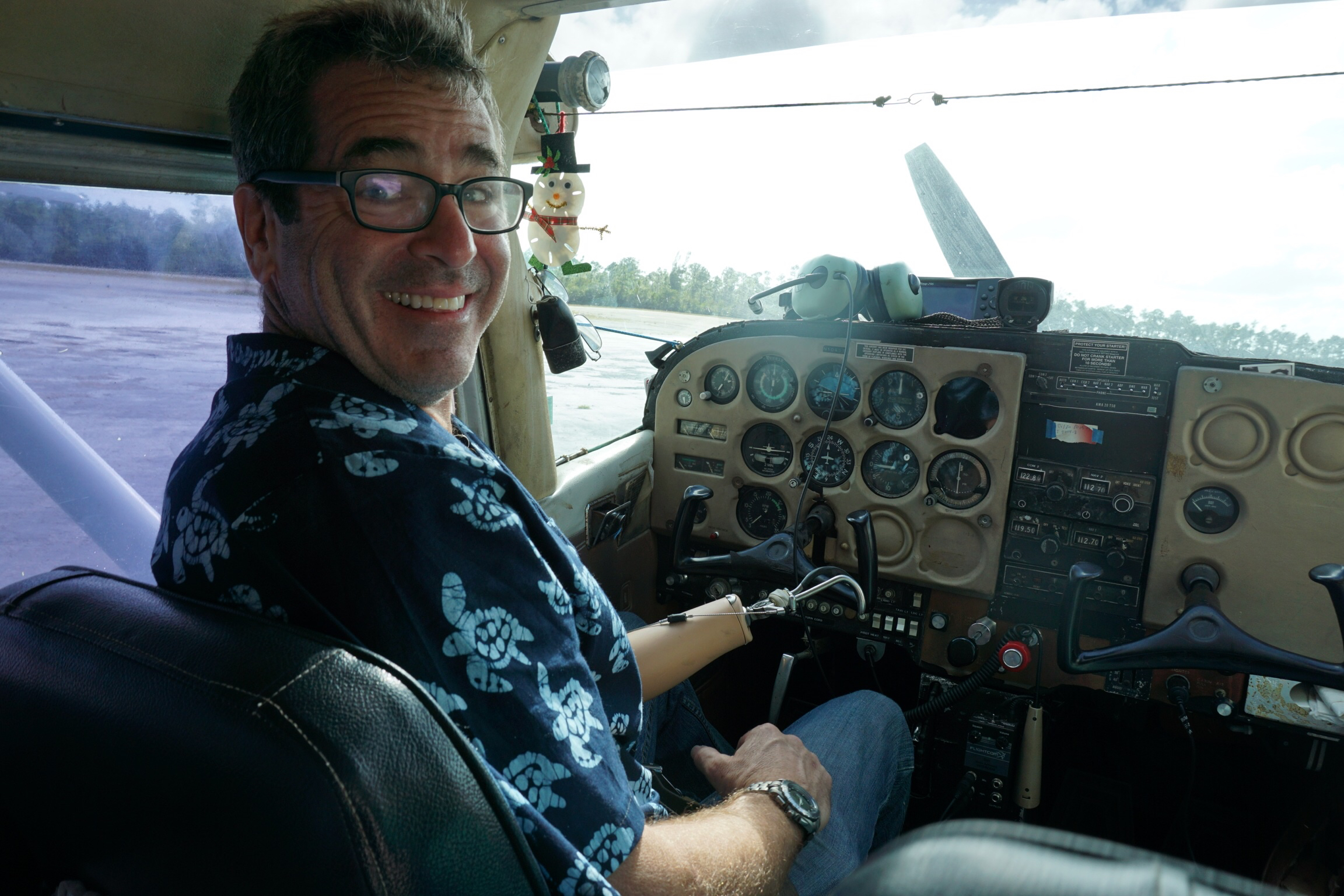 Miles in a Cessna 172 owned by his friend Jeff Birch, the owner of Small Hope Bay resort on Andros Island, the Bahamas. A pilot with 2500 hours of experience, Miles is working on techniques and trying out devices that will allow him to return to the cockpit. Photo by Suzi Tobias 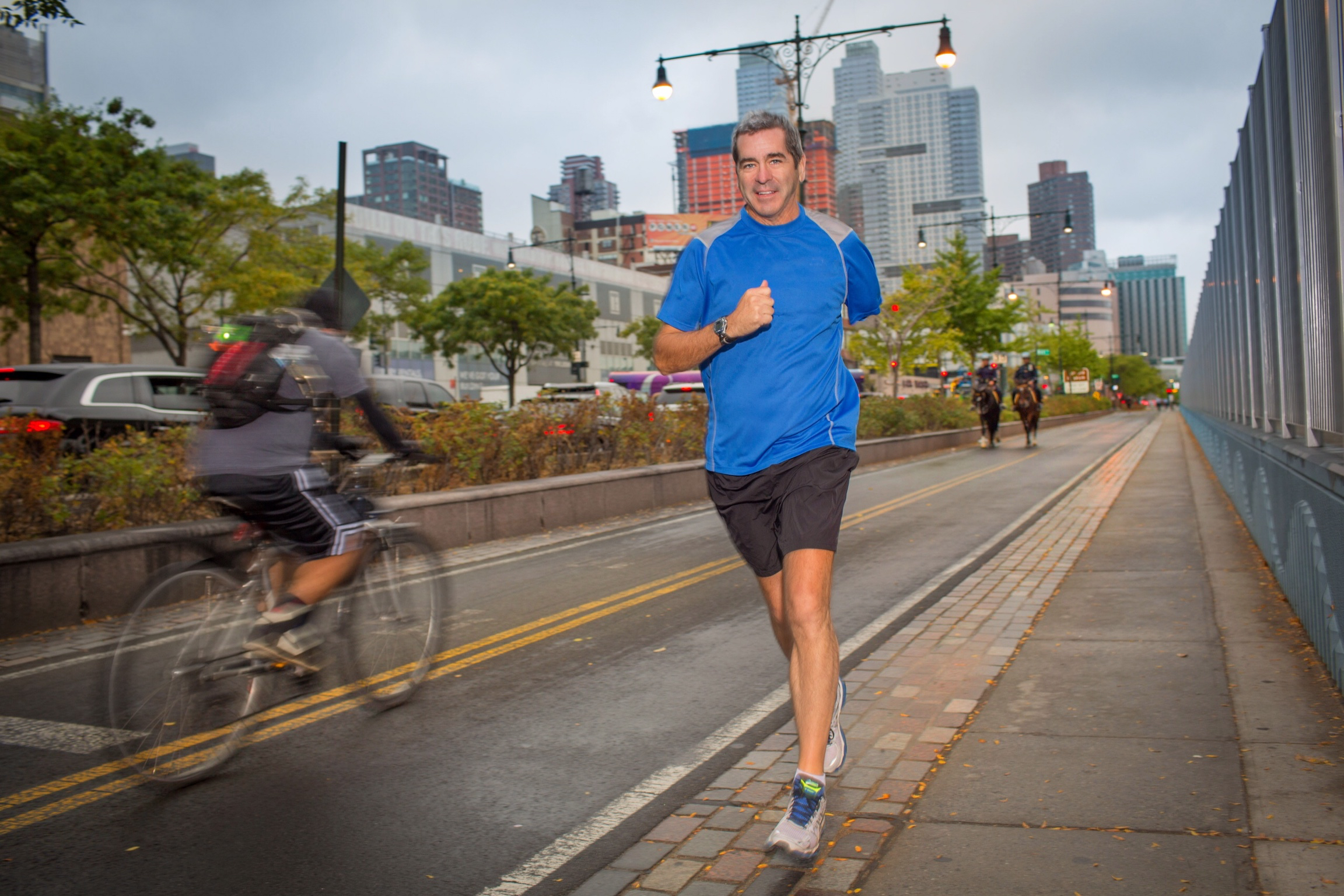 Running along the West Side Highway in Manhattan in September. Photo by Gary Landsman

Watch Miles O’Brien’s full story on the limits of the robotic arm tonight on PBS NewsHour.