Steady Stream of Space Debris Rains Down on Earth 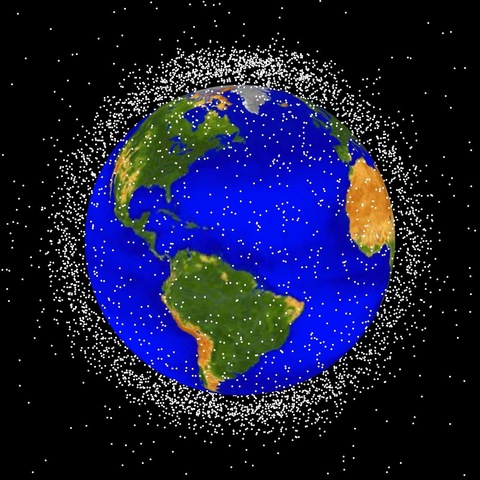 Low Earth Orbit is the region of space within 1,200 miles of the Earth’s surface. It is the most concentrated area for orbital debris. Photo by NASA Orbital Debris Program Office.

Update: May 1 | On a January night in 1997, Lottie Williams of Tulsa, Okla., was strolling through the park with friends when she saw a flash of light stream across the sky, and then, bam!, a shard of metal the size of a soda can nailed her on the shoulder. It was debris that had apparently detached from a disintegrating Delta 2 booster rocket while falling back to Earth. And it made Williams the only person known to have ever been struck by falling space junk. Since the object wasn’t heavy, it startled, but didn’t harm her.

It’s a little known fact that approximately once a week, a large object like a defunct spacecraft or a rocket body falls out of space and plunges back to Earth, likely landing in the ocean, or a vast area like Siberia or the Canadian outback. And smaller objects are falling from space back to Earth daily in a fiery descent. The Antares rocket for example, which launched on April 21, crashed back to Earth on Saturday.

“About once a year, we’ll find piece of spacecraft or a rocket body that survived reentry,” said Nicholas Johnson, NASA’s chief scientist for orbital debris.

While this cascade of raining space junk sounds menacing, the objects actually pose little risk to humans. Smaller objects usually burn up during reentry and no one object, Johnson said, poses a larger than 1 in 10,000 risk to humans.

The Department of Defense has a space surveillance network that tracks tens of thousands of man-made objects in orbit, including the biggest baddest pieces of space junk out there. These are the 23,000 objects bigger than a baseball, or 10 centimeters or larger in size. And scientists also monitor the objects falling back to Earth.

“Small objects can do a lot of damage to a spacecraft if it’s not adequately protected,” Johnson said. “But the shielding is such that we can defend against objects up to 1 centimeter.”

Critical components of the International Space Station, for example, are shielded to withstand debris up to 1 centimeter. Once or twice a year, Johnson said, NASA will maneuver the entire 400-metric ton space station to avoid massive space junk barreling toward it. They also perform so-called “collision avoidance maneuvers” with the 1,100 operational robotic spacecraft in low-Earth orbit.

With these shields protecting against smaller objects and the Defense department monitoring the larger ones, it’s the in-between pieces — the 5 centimeter objects — which pose the greatest threat, Johnson said.

“If a 5 centimeter piece of debris were to hit any spacecraft, it could cause very severe damage and loss of the mission,” Johnson said.

During an international meeting last week, scientists discussed possibilities to remove some of the more high-risk materials from low-Earth orbit. One possibility would involve launching new spacecraft into orbit, latching onto the defunct spacecraft or debris and boosting it into the ocean.

And future space missions must include safe disposal. No definitive plan has been launched yet, although global experts say there is an “urgent need” to remove space debris. But it’s challenging, Johnson said: