Manu Prakash considers himself lucky. Not because he won a 2016 MacArthur award for his creative inventions, but because his life could have easily turned out differently.

Growing up in India, Prakash’s family moved often between small towns and mega cities. The journeys offered firsthand access to the full spectrum of disparities inherent to a low-income nation striving to develop westernized wealth.

Those memories drive his pursuits in what he calls “frugal science” — shorthand for his mission to provide the basic tools of scientific exploration to everyone. And I mean everyone. His most lauded invention is a $1 foldable, paper microscope. He wants every child in resource-poor settings or elsewhere to own one.

When he isn’t making low-cost inventions, Prakash serves as a physical biologist at Stanford University. His research looks into how chaotic things interact to naturally form order. His most noted innovation is a water computer. Rather than flash individual electrons through its circuits, the device on individual water droplets to serve as 0’s and 1’s. To the average person, fluids behave unpredictability. But Prakash and his team saw structure and computation in those erratic movements.

NewsHour chatted with him about this invention and others, as well as the road he took to thinking outside the box.

One of Manu Prakash’s inventions is computer that transmits informaiton using water droplets instead of electricity. Photo by Kurt Hickman/courtesy of Manu Prakash and Stanford University

What’s it like to find out you’re a MacArthur genius?

I was quite shocked and quite surprised. They caught me at 6 a.m. in the morning, and I have two young [4-month-old] twins, and so I haven’t slept so much. And just when I caught a tiny amount of sleep, the phone was ringing.

I’m glad I picked it up though! It’s an honor, and it’s a huge surprise for me. There are so many phenomenal people around the world doing incredible work, so for them to choose me is quite an honor. It’s quite a humbling experience.

But I read very carefully their specifications; they say they award it for creativity. That’s what I’m going to go for.

How did you get started in your field?

I don’t really think about fields, per se. I got my undergraduate degree in computer science. Before that, I did a lot of mechanical engineering, math and physics in college. Then I moved, and I did my PhD in fluid mechanics and applied physics.

I basically bummed around. Now, I think about a lot of biological questions, but from an eye of a physicist. I’m called a physical biologist, but it’s not as if I planned to be one.

I’m just interested in science, and I borrow tools from fields that I know and I enjoy. The question is really what drives me.

So, you enjoy living outside of labels?

I’ve been stumbling into different fields as I go along, and that’s why labels don’t mean much to me.

Let me put it this way. If you get excited about an idea, and it’s seeded in your head, how do you let it go? I don’t know how to let it go. And it’s stuck in your head and it keeps bothering you over and over again. Whether you know how to tackle it or not, it will keep coming up.

At some point of time, you have to give into that craving. I enjoy that process. 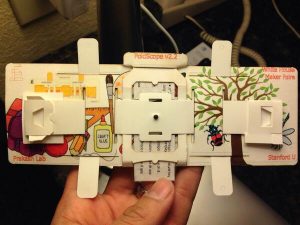 You’ve traveled to places like India and Cameroon on your frugal science mission, but how did you initially develop the idea for a $1 microscope?

Most of the frugal science ideas are originated in the field from side conversations. I still remember when we were in Thailand [in 2011] visiting a rabies clinic. I saw this beautiful fluorescent microscope sitting there with phenomenal researchers using it.

Right now we’re taking research tools, and then just putting them out in the field hoping they work. We need to make tools that are appropriate.

But there is another side to this idea. After doing many of these trips, I started realizing that we need to enlist a lot more of our time in science education.

This project is rolling out 1 million foldscopes next year. What do you want to achieve with the program?

So what if microscopes were pencils? What does it mean for a world where every single kid in the world has a microscope? Right now we have the first 50,000 foldscopes, and they’re being used around the world to do unimaginable things.

It’s opening up this idea of microscopy, that we’re all made out of microscopic things that you can actually watch and see. As scientists, we often take that for granted. There’s many people have never seen their own blood cells.

Another device created by Prakash’s lab: a $5 chemistry set. Photo by Kurt Hickman/courtesy of Manu Prakash and Stanford University

I travel around the world working in many countries where germ theory is hard to convince others. They don’t believe that microbes exist and they make you sick.

The goal is to build something sustainable such that we are not dependent on a profit model. That’s why we decided not to take any venture capitalist-style funds. It’s really driven by people who truly believe in this mission and are dedicated to putting their own resources on the table. [Full disclosure: The project received funding from the Moore Foundation, which also supports PBS NewsHour].

We need to extend our capabilities as a society to imagine our world as it is. We all talk about human imagination, but I’m always struck with how beautiful and amazing the world actually is. So when we ship these microscopes, we don’t tell people what they should do with this.

We don’t tell them anything. It’s a blank slate, and they come up with ideas.

Speaking of ideas, your lab invented a water computer? Where’d this idea come from?

Here’s what bothered me. Your computer has little bits of electrons running around to do computation. So it’s naturally manipulating physical matter, but there was no platform to systematically think about it. To manipulate matter, and not just manipulate information.

Oh, I get it! A computer’s circuits are physically moving stuff (electrons) but a user sees only the end product (information on a screen).

That led me to think about what if I could implement computation in a fluid. The end result would be the reorganization of physical matter. In 2007, I wrote the first paper for my PhD that describes a fluidic transistor using air bubbles.

So although it started as a whimsical idea, now we are actually thinking about practical applications.

Imagine sitting on your computer and programming a little fluidic processor that has hundreds and thousands of chemicals, tiny little drugs.

Right! You could program this water computer to deliver a sequence of different compounds at very precise times, akin to how our liver naturally works.

Yes, because living systems do this. But in non-living things, we don’t have that much control. So, we’re thinking a lot about that.

A video of an experiment from your lab went viral last year. It involved dancing droplets of food coloring. How did you develop this idea?

In this scenario, we came up with a way where different droplets could sense each other.

Whoa wait, the water droplets could sense each other?

Very subtle changes in their chemistry could be sensed. Then when that was possible, suddenly, we could couple that to actuation [to actions], and then get a true behavior.

One great aspect of that work is it’s very easy to replicate. There’s some beautiful videos on YouTube of a father and a 6-year-old repeating that experiment, and that gives me a lot of joy as well. It’s quite a conceptual experiment, but it can be done anywhere.

And in a way, you can connect this chemical sensing to the origins of life?

You can connect this idea to the origin of molecular motors [in cells]. Early on when they evolved, what were they good for? They didn’t have all the gadgetry to do specific tasks. But could it be possible that these systems had the capacity to work in a coordinated way naturally without a coordinator.

In our system, the droplets demonstrate there is absolutely no controller. Just very, very minimal active system has the capacity to act as a sensor and an actuator.

How did you personally take your talent and turn it into real success?

I wouldn’t call it a success in any way. I’m not done yet. I think I enjoy doing what I do, and I don’t really think too much about success.

I’ve often said this, and I really mean it, which is I feel incredibly lucky to do what I do. I get to enjoy what I do, and it could have turned out many different ways but it didn’t. That gives me a slight sense of guilty responsibility to make that available to others who weren’t so fortunate in some way. I’m very humbled, very happy and very thankful to get the support that I’ve gotten for all my work. None of this would be possible if people didn’t support us.

And it bothers me that luck has so much to play with it. A lot of my work is trying to get rid of that luck. Everybody should have the chance to enjoy science.

Left: Manu Prakash is a physical biologist, the inventor of a $1 foldable microscope and a 2016 MacArthur grant winner. Photo by John D. & Catherine T. MacArthur Foundation