Male spider genitals have some nerve

Male spiders have a bad reputation in the bedroom. Their arachnid genitals have been described as “numb” and as haphazard as an “elongate, elaborately formed fingernail” trying to perform a complex task in the dark. This is because it was long thought that male spider genitals had no nerves.

This assumption might be wrong, according to a new study from Germany that, for the first time, found nerves in the genitals of male spiders, using X-rays and other scans.

Male spiders don’t have penises. Instead, they possess two stubby appendages called pedipalps that they use to store sperm and copulate with female mates. Scientists have examined these sexual organs — called palpal bulbs — for at least a century without being able to spot nerve tissue inside.

In 2010, Smithsonian Institute biologists William Eberhard and Bernhard Huber described male spider mating as “sensorily blind” and made the fingernail analogy above. Many species of male spiders, they note, struggle to dock with female genitalia, conducting exploratory humps that have been described by scientists as “scraping”, “stroking”, “rubbing”, “scrabbling”, “beating”, “poking”, “slapping”, “fumbling”, brushing” and “flubs.”

The case seemed closed until today, when a new report released in Biology Letters outlined the presence of two clusters of neurons in the palpal bulbs of Tasmanian cave spiders (Hickmania troglodytes).

“I’ve been working with sensory structures of arthropods for a while, so I am experienced with identifying nervous tissue; however, in the end we were just lucky to find this nervous tissue inside this spider,” said evolutionary biologist Elisabeth Lipke of the University of Greifswald, Germany in an email. Lipke co-led the study.

The team started by dissecting the palpal bulb, slicing the tissue into thin sheets, and placing those onto glass slides. They then used three types of microscopes to make the discovery. A “transmission electron microscope” spotted the architecture of a small nerve, consisting of long branches called neurites and empty sacks called vesicles that house neurotransmitter chemicals. 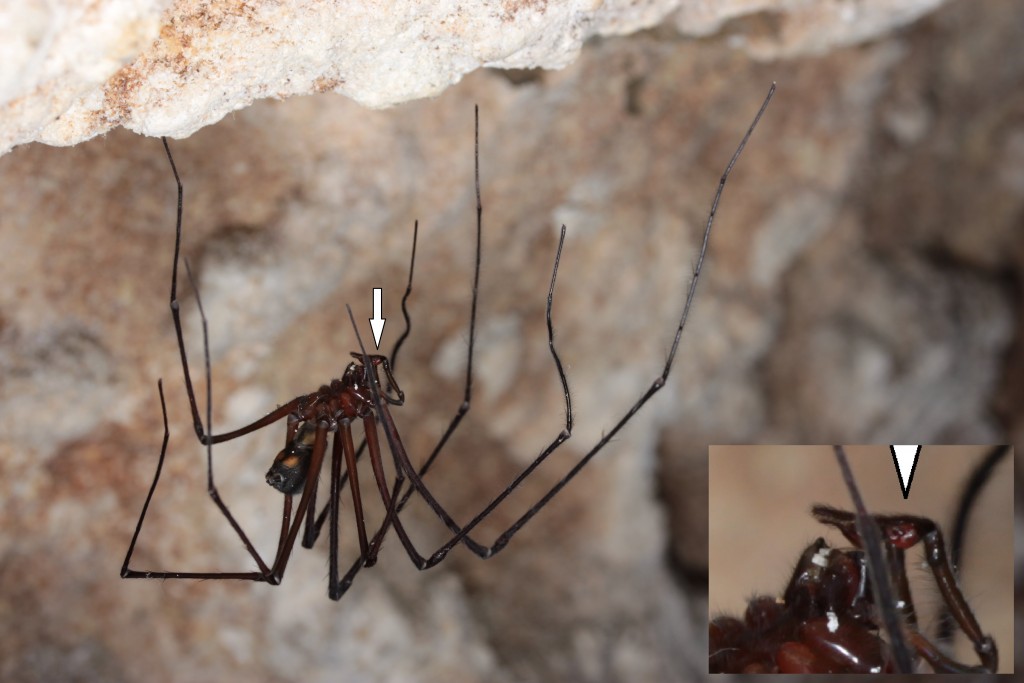 A male Tasmanian cave spider, Hickmania troglodytes, hangs in its natural habitat. The white arrow points to one of its sex organs, a pedipalp. Photo by M. J. Ramırez/Courtesy of Elisabeth Lipke.

The scientists also found two glands in the palpal bulbs that appear to be connected to the nerves. Next, with an X-ray microscope and a light microscope, the team built a 3-D reconstruction of the palpal bulb. 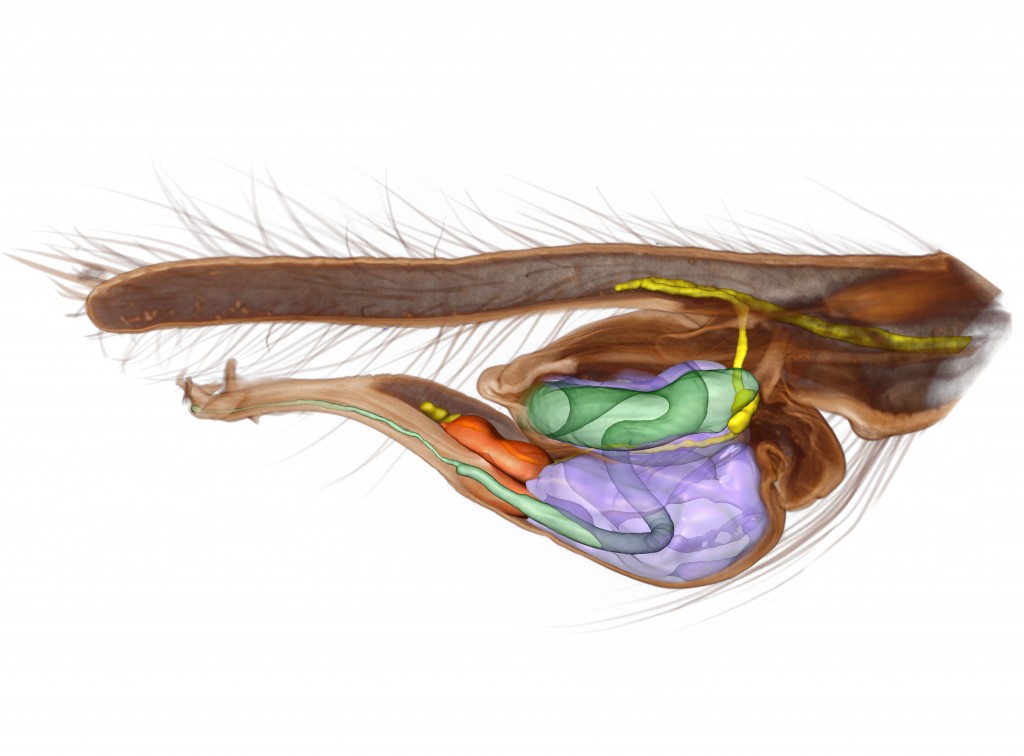 In general, male spiders have evolved an array of skills to succeed at reproduction. Some species are equipped with complex pedipalps that lock onto the female genitals, called the epigynum, like an anchor. Other males break off or

The team suspects that the nerves in Tasmanian cave spider might sense physical stress on the palpal bulb as it inserts and expands during copulation, though their study didn’t directly measure whether these neurons react to sexual strain. 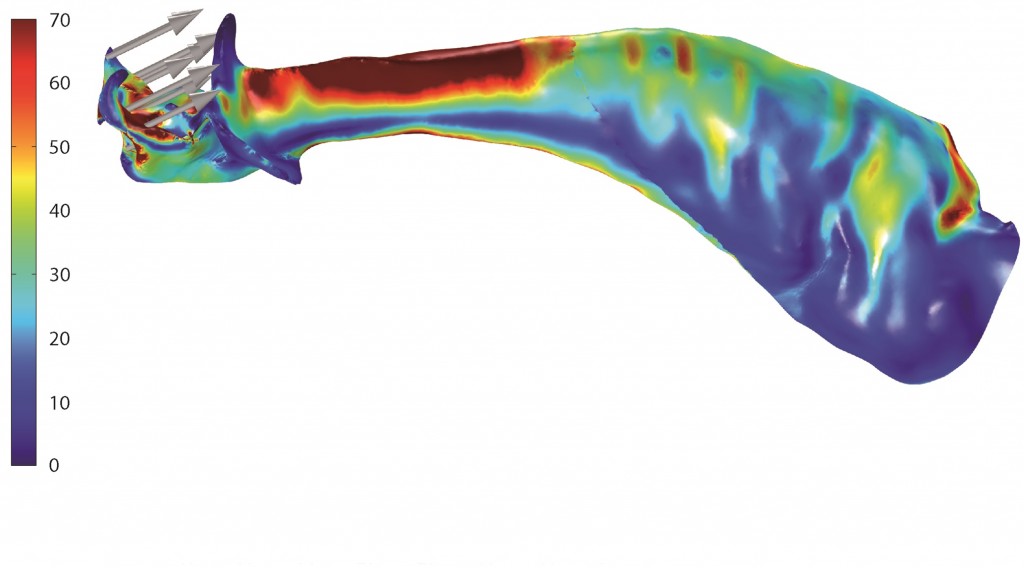 3-D model of where strain might occur in with the copulatory organ of male Tasmanian cave spiders. The big grey arrows indicate the directions that the stress load might be applied during sex, while the colors red, yellow and blue indicate areas where high, medium and low levels of strain might be felt. Photo by Lipke E, Hammel JU, Michalik P. Biol. Lett. 2015 (modified).

Alternatively, male Tasmanian cave spiders might use sensory nerves to guide copulation, while yet another hypothesis is that the neurons control unknown sexual secretions from those palpal glands.

Lipke thinks it’s possible that this new discovery could extend to other spider species.

“We would not be surprised if more spider species have evolved copulatory organs that are able to perceive sensory input,” Lipke said.

Left: Tasmanian cave spider on the hand of biologist Peter Michalik of the University of Greifswald, Germany Photo by Christian Wirkner.