Can you guess how many trees are on Earth?

How many trees are on the planet? Go ahead and guess. One for every person or around 7 billion? 100 billion?

The best guess is 3.04 trillion or 422 times the human population, according to a study published today in the journal Nature. The collaborative investigation, which engaged researchers from 15 countries, provides one of the most sweeping estimates of tree density ever.

Led by Yale University environmental scientist Thomas Crowther, the study combined satellite imagery with a boatload of on-the-ground observations — 429,775 — from studies conducted over the last decade. The study also collected information from forestry databases, such as the Smithsonian Tropical Research. The team defined a tree as any plant with woody stems larger than 3.9 inches diameter at breast height. The field measurements spanned the planet’s 14 recognized ecosystems, as defined by the Nature Conservancy — from boreal forest to deserts to tundra to the tropics.

By using supercomputer algorithms, the researchers painted a map of global tree populations with a resolution of a square-kilometer. The new findings corrects the former estimate of tree population, 400 billion trees, which was made using satellite imagery and estimates of forest area but didn’t include on-the-ground recordings.

So assuming a worldwide human population of 7.2 billion, rather than there being 61 trees per person, there are 422 per person. Tropical forests harbor the most trees or about 43 percent of the global population, while temperate climates house 22 percent. Russia (641 billion), Canada (318 billion), Brazil (301 billion), the U.S. (228 billion) and China (139 billion) top the list of countries with the most trees.

The data aren’t just a snapshot of the present, but provide glimpses into the past and future too. The researchers estimate that Earth has lost nearly half of its trees — 46 percent — since the start of human civilization. And due to ongoing deforestation and human land-use, the planet is losing about 15 billion trees per year or two trees for every person. The highest rate of deforestation is occurring in the tropics.

“We’ve nearly halved the number of trees on the planet, and we’ve seen the impacts on climate and human health as a result,” Crowther said in a press statement. “This study highlights how much more effort is needed if we are to restore healthy forests worldwide.” 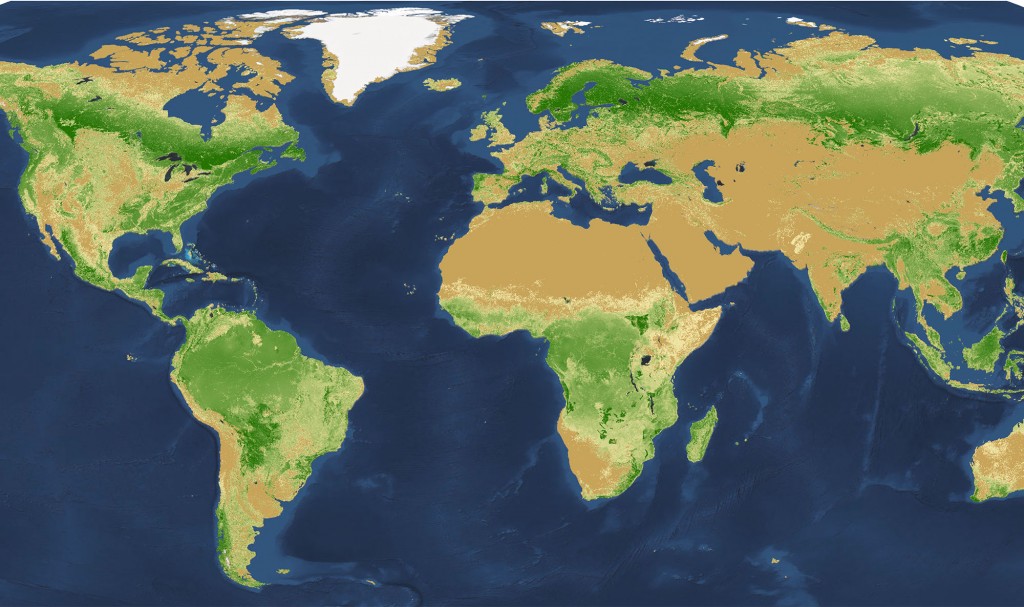 This is the global map of tree density at the square-kilometer pixel scale. Photo by Crowther et al., Nature, 2015.