ExoMars orbiter gets up close to the Red Planet

Scientists are collecting new snapshots of the Red Planet. CaSSIS – the camera on the freshly arrived ExoMars Trace Gas Orbiter – beamed back its first high resolution images of the planet on November 22.

The orbiter repeats a pattern of getting close to Mars’ surface – about 143 miles away – then heading more than 62,000 miles from the planet. During the brief periods near Mars, the camera can capture images that will allow scientists to build 3D models of the planet.

These first images from the European Space Agency satellite were just a test, CaSSIS team leader Nicolas Thomas said in a statement. They were unable to capture color on this first pass due to high levels of dust at the image site. However, the orbiter did spot different landmarks in high detail. 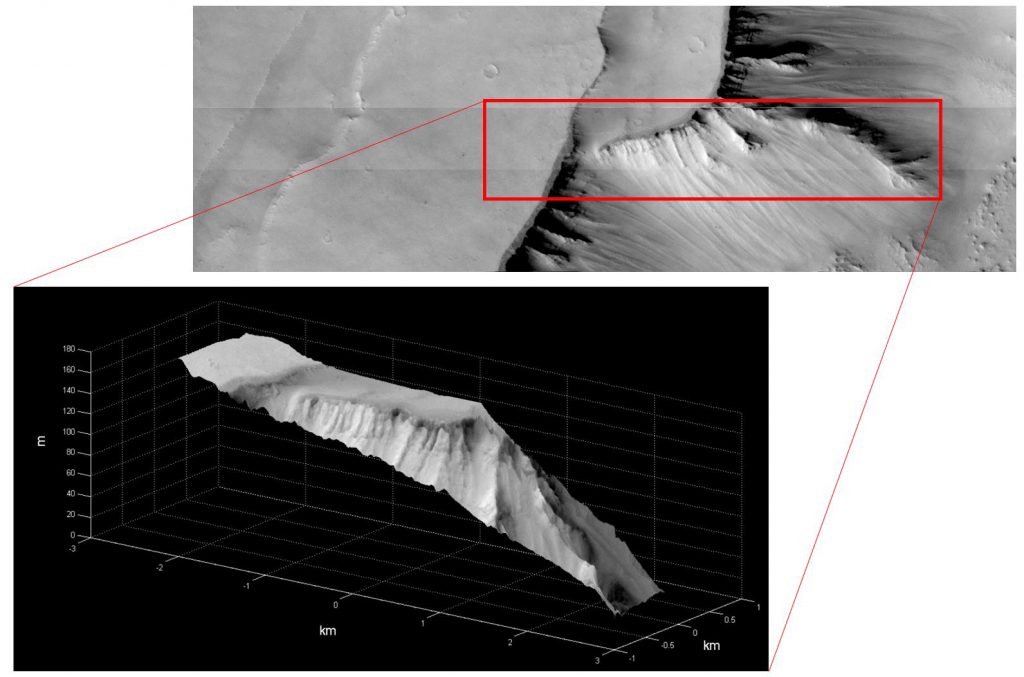 The first stereo reconstruction of a small area in Noctis Labyrinthus. The image gives an altitude map of the region with a resolution of less than 20 meters. Photo by ESA/Roscosmos/ExoMars/CaSSIS/UniBE

“We saw Hebes Chasma at 2.8 meters per pixel,” Thomas said. “That’s a bit like flying over Bern [Switzerland] at 15,000 kilometers per hour [9,300 miles per hour] and simultaneously getting sharp pictures of cars in Zurich.”

A structure called Arsia Chasmata on the flanks of one of the large volcanoes, Arsia Mons. The width of the image is around 25 km. The formation is volcanic in origin and pit craters (possibly caused by subsidence) can be seen. Photo by ESA/Roscosmos/ExoMars/CaSSIS/UniBE

Future shots by the CaSSIS camera will also represent some of the first images depicting the natural color of the Red Planet. Get ready for the rad artistic renderings!

Left: Image of a 1.4 km sized crater (left center) on the rim of a much larger crater near the Mars equator. It was acquired at 7.2 meters/pixel. The images are very sharp and show the instrument is working extremely well at its nominal data acquisition rates. Photo by ESA/Roscosmos/ExoMars/CaSSIS/UniBE