Over the weekend, NASA hinted that they had solved a major Martian mystery. Sorry folks, it isn’t aliens. Here’s the scoop:

Mars has seasonal rivers of flowing water. Note the verb “has” rather than “had”, as in liquid water is a current feature on present-day Mars. In other words, this is not from the distant past — the water is flowing now. What appeared to be a dry void of red-orange rock is wetter than previously thought.

Liquid water is the key to terrestrial life as we know it, so the announcement isn’t just a major hydrological discovery, but goes a long way toward supporting the possibility of — cue David Bowie — life on Mars. The findings were reported today in the journal Nature Geoscience.

“I grew up during the era when Viking had landed on Mars and revealed a desertlike planet, apparently dead, and not as interesting as we see it really is,” said John M. Grunsfeld, astronaut and associate administrator of NASA’s Science Mission Directorate in Washington, in a press briefing. “Our instruments today are showing a much more dynamic and complex planet. When we explore, we make discoveries.”

The investigation, led by planetary scientist Lujendra Ojha at the Georgia Institute of Technology, made the discovery by using images from NASA’s Mars Reconnaissance Orbiter. Launched in 2005, this satellite sports a series of instruments that can measure the chemical and physical composition of the planet. It can snap pictures of dust storms and profile the gases in the atmosphere. Its ground penetrating radar can search for ice water trapped underground. And it can analyze minerals deposited on the planet’s rocky surface.

As an undergrad in 2011 at the University of Arizona in Tucson, Ojha and his advisor Alfred McEwen discovered streaks flowing downhill for hundreds of meters in still pictures taken by this satellite. The streaks, known as recurring slope lineae (RSL), looked seasonal. They appeared in the warm summer months on Mars, but then faded away when temperatures became colder.

The flowing water on #Mars is seen as wet stripes called “recurring slope lineae.” They reappear when it’s warm. pic.twitter.com/OSzDGApwxo

“If we go back 3 billion years and take a look at Mars, Mars was a very different planet. It had what we believe was a huge ocean, perhaps as large as two-thirds of the northern hemisphere,” said Jim Green, director of planetary science at NASA Headquarters in a press briefing. “But something happened. Mars suffered a major climate change and lost its surface water.”

In this new paper, Ojha, now a PhD student at Georgia Tech, has examined the chemical composition of those streaks using an instrument on the orbiter called CRISM — Compact Reconnaissance Imaging Spectrometer for Mars. He and his colleagues have found salts — mostly magnesium perchlorate, magnesium chlorate and sodium perchlorate — at four locations where these streaks occur during the warm summer. 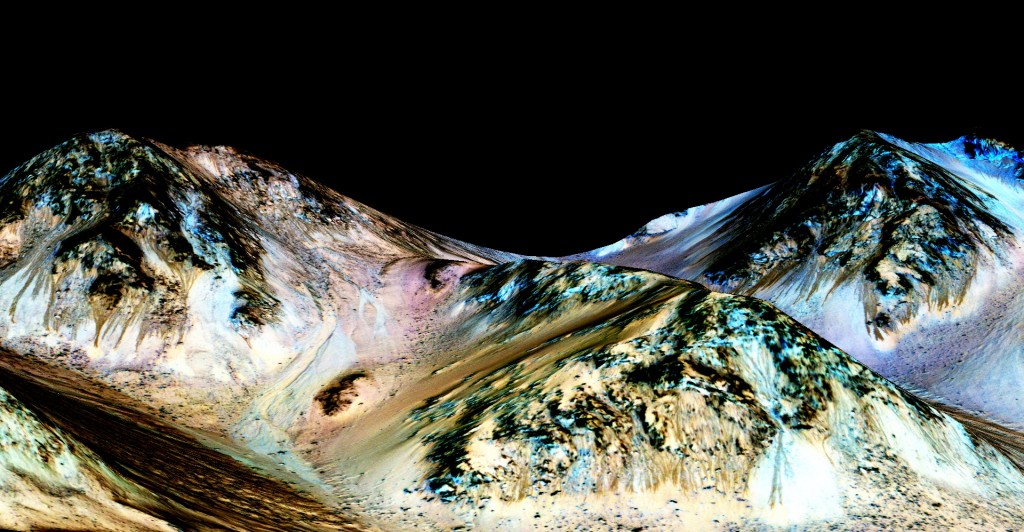 These dark, narrow, 100 meter-long streaks called, recurring slope lineae, flowing downhill on Mars are inferred to have been formed by contemporary flowing water. Planetary scientists have now detected hydrated salts on these slopes at Hale crater, corroborating their original hypothesis that the streaks are indeed formed by liquid water. The blue color seen upslope of the dark streaks are thought not to be related to their formation, but instead are from the presence of the mineral pyroxene. Photo by NASA/JPL/University of Arizona 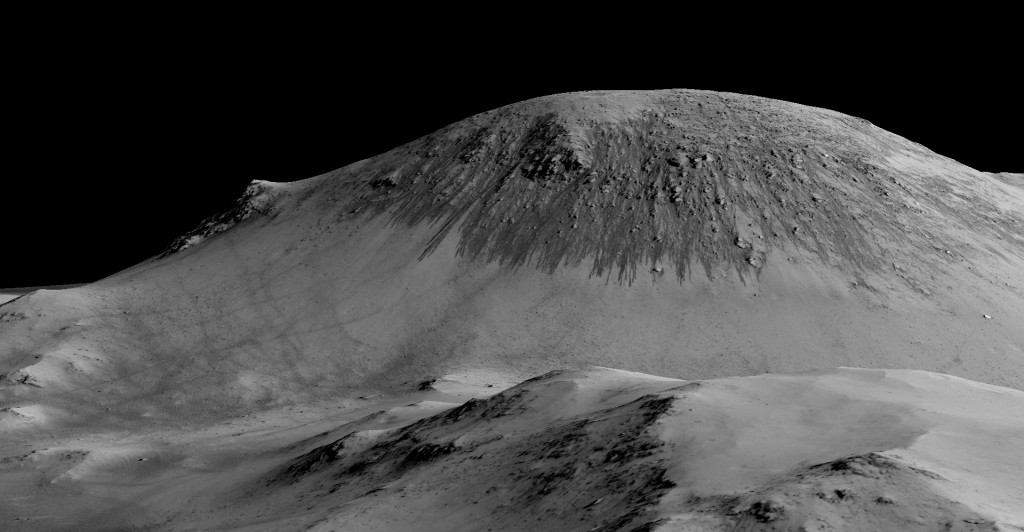 Planetary scientists detected hydrated salts on these slopes at Horowitz crater, corroborating their original hypothesis that the streaks are indeed formed by liquid water. Photo by NASA/JPL/University of Arizona

Fun #Mars fact: One of the places where liquid water flows have been seen is Acidalia Planitia — same place they landed in @MartianMovie.

Salty or “briny” water melts more readily than regular water, and the salts found in these flowing streaks could lower the freezing point of this Martian water to a temperature range seen during the summer.

“Pure liquid water is highly unstable on the surface of Mars,” Ojha said in a press briefing. Akin to on Earth, water freezes at 32 degrees Fahrenheit, but in contrast, it evaporates at 50 degrees Fahrenheit. However, the briny water outlined in this paper will remain a liquid until -94 degrees Fahrenheit and won’t start boiling until 25 degrees Fahrenheit. Thus, Martian temperature ranges during the summer could support the existence of these liquid streams.

“These results strongly support the hypothesis that seasonal warm slopes are forming liquid water on contemporary Mars,” the authors write. 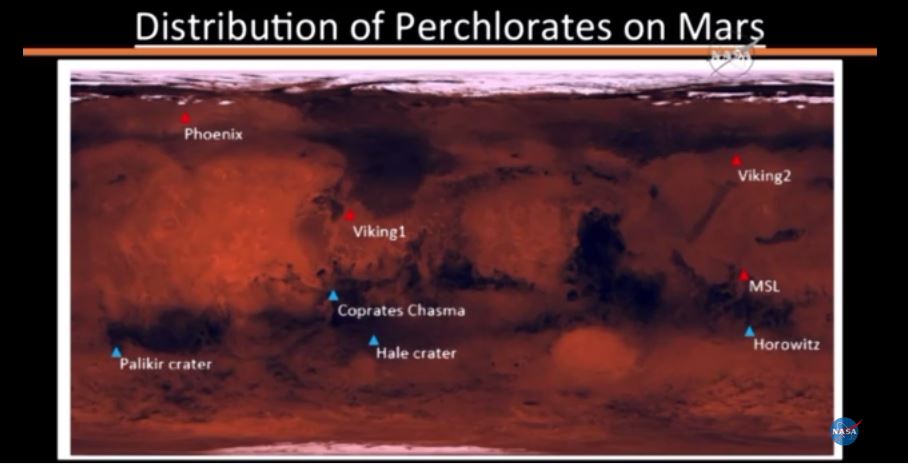 Red triangles indicate places where percholorates — hydrated salts — were previously detected by rovers or landers. “Both Viking sites and the northern plains explored by the phoenix mission in late 2000,” said Mary Beth Wilhelm of NASA’s Ames Research Center in Moffett Field, California and the Georgia Institute of Technology. Most recently, percholorates were detected by the Curiosity rover. New sites revealed by today’s study (in blue) are the first made by an orbiter. Photo by NASA

These transient wet conditions on Mars’ surface may be enough to support terrestrial life, like microbes, though that question can only be answered by further investigation. In 2011, McEwen told Science Magazine that these salty brines are “where life is most likely to be found today on Mars.”

At today’s press briefing, McEwen reiterated that point by saying, “the possibility of life in the interior of Mars has always been very high… and maybe now we can find some near the surface.”

These findings, along with multiple measurements of hydrated soil made by rovers and landers, provide even more incentive for sending a manned mission to Mars, Grunsfeld said.

“Today’s announcement is one of the reason’s why it’s even more imperative that we send astrobiologists and planetary scientists to Mars to explore the question of is there current life on Mars,” he said.

Editor’s note: This story has been updated to include information from a NASA press briefing (see below).

Left: This image shows the central mountains of Hale Crater on Mars, one for four locations on the planet where scientists confirmed today the existence of flowing saltwater rivers called recurring slope lineae (RSL). These active flows are seasonal and extend downhill from bedrock cliffs, mostly towards the northwest (upper left). This image was acquired in middle summer when RSL are most active in the southern mid latitudes. Photo by NASA/JPL-Caltech/University of Arizona