A gas cloud collides with the black hole at the center of our galaxy, and we get to watch

The landscape in Chile’s Atacama desert is Martian-like: dry, barren and flanked by volcanoes, and its high altitude and unpolluted skies make it a prime spot for stargazing. It was there, after a full night of such observation — and over a 4 p.m. breakfast — that astronomer Stefan Gillessen found himself in possession of some very special data. His observations showed a cloud of gas being stretched out, or “spaghettified,” about to be ripped apart, as it barreled toward the black hole at the center of our galaxy.

He and his team at the Max Planck Institute for Extraterrestrial Physics in Germany had been observing Sagittarius A*, the supermassive black hole, using the European Southern Observatory’s Very Large Telescope in Chile. And for nearly a decade, they had been sitting on a batch of low-resolution data. When the atmospheric conditions are poor, it is common to use the telescope’s adaptive optics system at longer wavelengths, which allows scientists to still peer through the atmospheric turbulence, but compromises the sharpness of the image. It was in 2011 that he decided to systematically study this coarser data.

“It immediately jumped to our eyes that there is an object that we do not see at shorter wavelengths, and it’s moving right to position at the black hole,” Gillessen said. “It was clear that this was not a usual star.”

Compared to the temperature of a star, G2 is cool — about 750 degrees Fahrenheit and comprised mostly of hydrogen. And it’s hurling through space at a few thousand miles per second, powered by Sagittarius A*’s gravitational force. For perspective, it could fly from the U.S. to Germany in about a second.

Its orbit has it barreling almost straight toward the black hole, though it will pass at a distance of about 100 times the space between Earth and the sun. It’s expected to reach its closest approach to the black hole next month, and science, in a first, will be able to watch the encounter in real time.

There are several theories on the properties and origins of G2. Some say it’s simply a cloud of gas and dust. Others, like theoretical astrophysicist Avi Loeb, chair of Harvard University’s astronomy department, has a theory that a star could be hidden inside the cloud. Or it could be a stream of gas that’s been ripped from the outer layer of a giant star.

“Usually in astrophysics, timescales are very long,” Loeb said. This means it’s rare to see changes within a human lifetime. But since the G2 cloud’s orbit can be monitored over a year or two, scientists will hopefully be able to settle on a leading model.

“It’s just like arranging an experiment in your backyard and looking at it,” Loeb said. “Except nature does it for us. 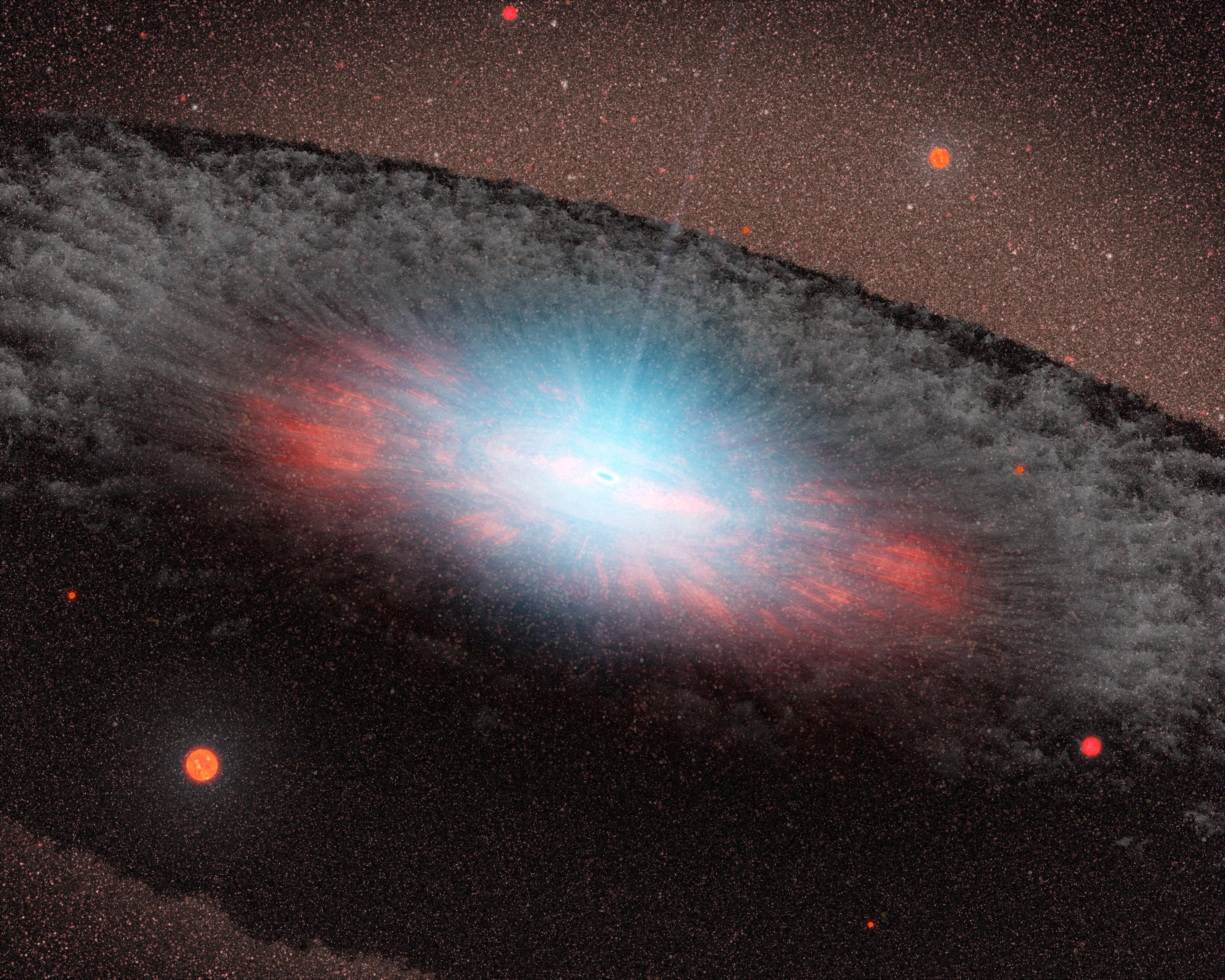 This artist’s concept shows a supermassive black hole at the center of a galaxy. Image by NASA/JPL-Caltech.

Let’s back up. A black hole is Einstein’s solution for what happens when a star dies. Sometimes, as a massive star burns off all of its fuel, it collapses into a fantastically tiny, tremendously dense object called a neutron star. (Imagine a billion tons of weight packed into a teaspoon.)

And some of these neutron stars become so massive that gravity will cause them, too, to collapse under their own weight to a point — that’s a black hole. Black holes are voracious eaters that gulp up everything they can — dust clouds, stars and other space debris — and they’re shrouded by what’s known as an event horizon. That’s the area where the gravitational pull is so strong that nothing — not even light — can escape. Supermassive black holes like Sagittarius A* are thought to live at the center of most galaxies.

But Sagittarius A* has long been inactive. And G2 could be its first feast in about 100 years, astronomers believe. Part of the gas cloud has already whipped around the black hole, but some could spiral downward and get swallowed up, potentially producing a flare.

“It’s extremely exciting, because it’s of such great interest to see how black holes eat,” said Shep Doeleman, an astronomer with MIT’s Haystack Observatory and the Harvard-Smithsonian Center for Astrophysics. “It’s like watching a baby eat strained peas. So much food gets splattered on the wall. If the baby were efficient, all the food would wind up in the baby, but in this case, it makes so much of a mess, and that is what we see.”

Scientists are also eager to observe what happens as the gas cloud rear-ends the accretion disc, the pancake of dust and matter swirling around the black hole. Doeleman calls this its “cosmic traffic jam.”

The first thing that will happen, he said, is the gas cloud will slam into something approximately the size of our solar system, producing X-ray emissions. Then the really interesting part begins: the cloud just might start to spiral into the black hole.

“What everyone is waiting to see happen is whether the output of the Sagittarius A star starts to grow dramatically,” Doeleman said. “It might start to blossom from a timid vacuum of a black hole to a beauty queen, the belle of the ball. It would then start to really emit powerfully.”

That would confirm that black holes periodically erupt.

“We really don’t know precisely how black holes eat or the frequency of their meals,” he continued. “This would give us the opportunity to not only watch it in real time, but to do it in a place that resolves what happens.”

G2’s journey past Sagittarius A* takes about a year, and we’re halfway through it now. The cloud’s front end is already getting disrupted by the black hole’s gravitational force. Scientists have determined through measurements of its velocity that the front part of the cloud is moving faster than the back part. But what happens next is anybody’s guess.

“That’s great for observational astronomers,” Gillessen said. “We’ll be learning something, but we still don’t know what we will learn.”

Next week, Gillessen will return to Chile to continue observations. The altitude, dry air and odd hours can be exhausting, so no one observes for longer than two weeks, he said. So he’ll work in shifts.

“Having some aspirin with you is a good idea. You can get easily a headache,” he said. “And chocolate. But that’s more for the mental health.”

Correction: An earlier version of this post incorrectly identified the name of the black hole at the center of our galaxy. It is Sagittarius A*, not Sagittarius A.

Left: This simulation shows the G2 gas cloud during its close approach to the black hole at the center of the Milky Way. Image by ESO/MPE/Marc Schartmann.