The biggest creature to ever walk the surface of the earth invaded New York City’s American Museum of Natural History on Friday.

The 122-foot-long dinosaur is a species so new that it has yet to be named — and has a skeleton so big that it doesn’t even fit inside one room. 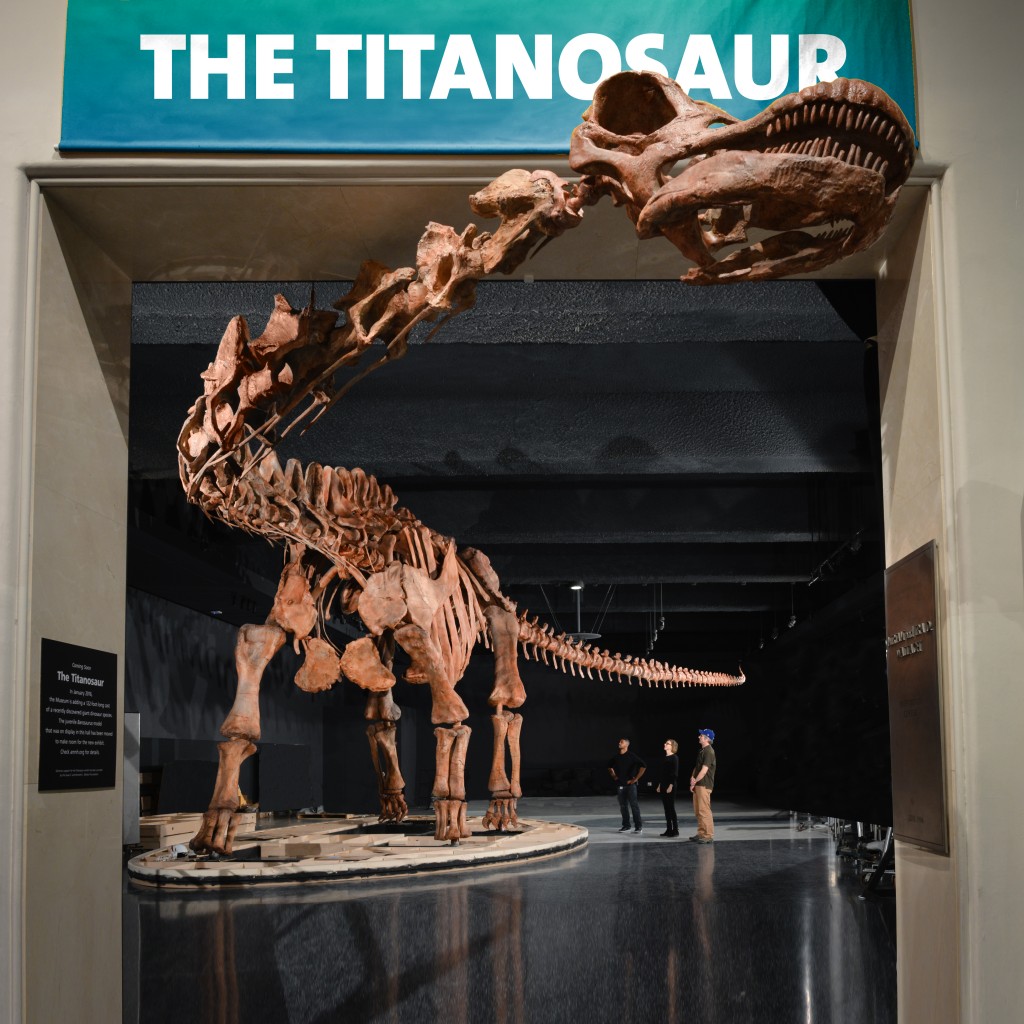 The 122-foot-long dinosaur cast is too large to fit into the Miriam and Ira D. Wallach Orientation Center—part of its 39-foot-long neck extends out toward the elevator banks, welcoming visitors to the fossil halls. Photo courtesy of D. Finnin/AMNH.

The enormous titanosaur, part of a group of herbivores that roamed the earth some 100 million years ago, is the newest permanent exhibit to join the museum.

“This animal, although not as massive, is about 30 feet longer than the blue whale. It’s the biggest living thing that we know of to ever walk the surface of the planet.”

Scientists believe it weighed as much as 10 African elephants (70 tons) while it’s neck was long enough to peek into a five story building (46 feet).

The display is so large it couldn’t be contained to a single room in the museum. The titanosaur’s head and a portion of its 39-foot neck poke out of the doorway of the main gallery, where the top of the skeleton barely grazes the 19-foot-4-inch ceiling.

This week’s unveiling marks the first time the behemoth has been displayed to the public.

“For a long time, we’ve known that animals may have approached this size, but they were largely just quite fragmentary remains, and we couldn’t get a really good look at just how immense these creatures were,” museum curator Dr. Mark Norell told PBS NewsHour. “This titanosaur specimen is a really important specimen in the great scheme of paleontology.” 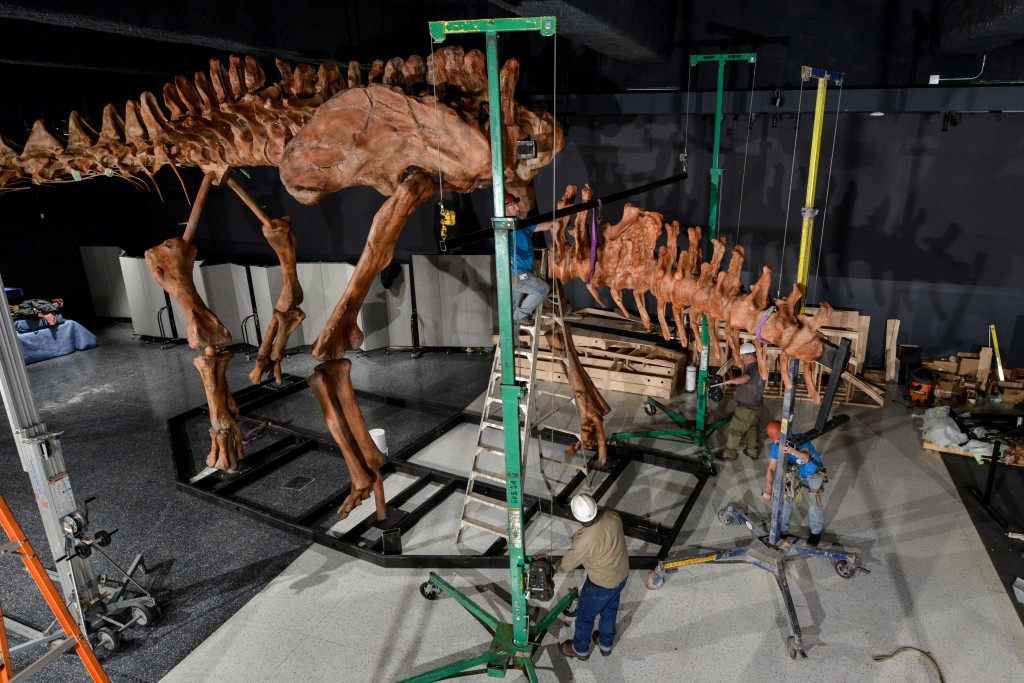 The titanosaur dates back to the Cretaceous period, the age that ended with the mass extinction of dinosaurs, but the story of this particular specimen dates back to 2012, when a rancher in southern Argentina reported to the Museum of Paleontology Egidio Feruglio that he found fossils on his land.

By 2014, paleontologists visited the desert site near La Flecha, part of the Patagonia region of Argentina, and excavated 223 fossil bones belonging to six dinosaurs at the site.

“This thing is by far the best preserved titanosaur specimen of this size that’s ever been found,” Norell said. “It gives us our first good, real picture about how we found them, about how big they were, about how tall they were. And I think that for years to come, international groups of scientists will study this specimen.” 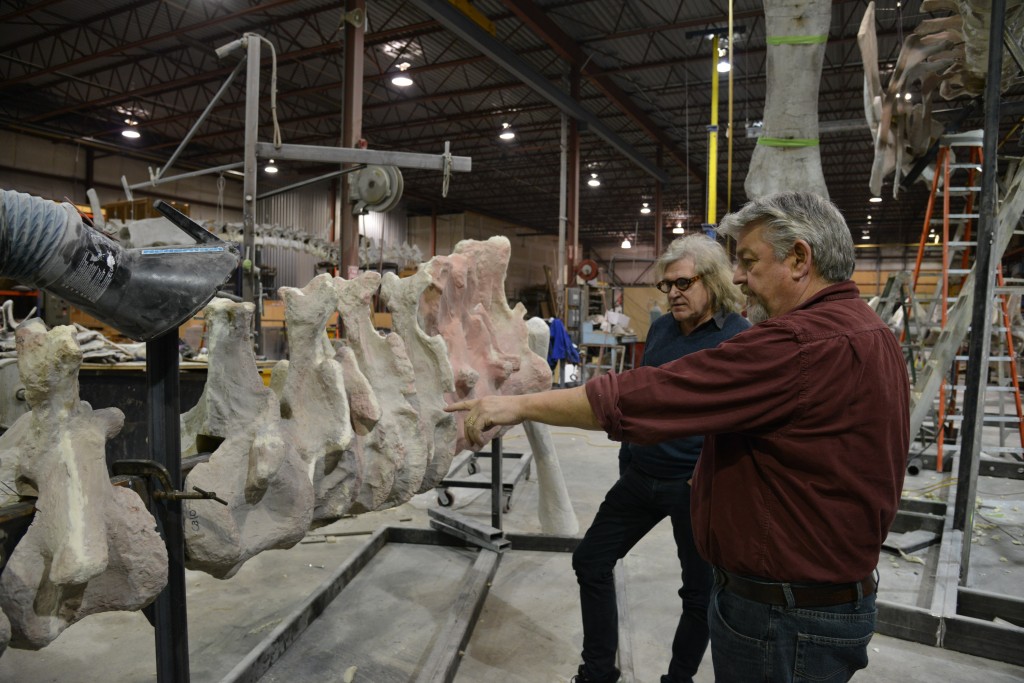 Mark Norell, Chair and Macaulay Curator in the Museum’s Division of Paleontology, reviews the progress of the cast with Peter May, President of Research Casting International in Ontario, Canada. Photo courtesy of D.Finnin/AMNH

The skeleton on display doesn’t include any of the real fossils — which are far too heavy to mount — but rather lightweight 3D prints made of fiberglass based on digital scans of 84 of the original fossils, a process that took scientists from Research Casting International in Ontario, Canada, six months to complete.

Also on display at the museum for a limited time are some of the best preserved fossils from the excavation, including an 8-foot femur, whose unique shape and size was proof to scientists they had discovered a new species.

A researcher uses a 3D scanner to make lightweight prints of the fossils made of fiberglass. Photo courtesy of D.Finnin/AMNH.

Norell said the discovery and mounting of the titanosaur represent huge gains for modern paleontology and that new technologies have given paleontologist “an entirely new tool kit” to determine more biological characteristics of dinosaurs, such as age, speed, weight, diet, color and the size of their brain.

“The discoveries just keep continuing and continuing and continuing, with lots of new specimens becoming available,” Norell said. “At the museum, we have the blue whale, for instance, we have the giant redwood tree. And I think for everyone that comes to this museum, the titanosaur is going to be added to the list of iconic things here and it’s something that people are going to take away with them and really remember for a long time after they visit.”

“It’s really been a great time to be a paleontologist.”