MAVEN to answer the mystery of Mars’ missing atmosphere 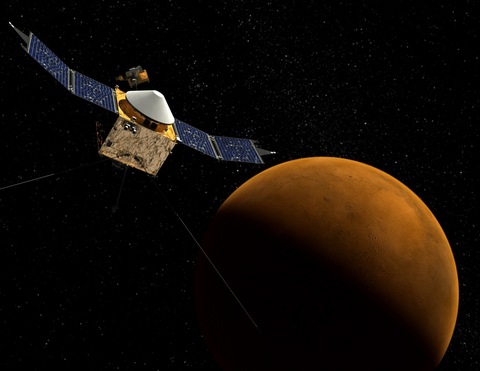 An artist’s concept of MAVEN satellite, pictured, shows Mars in the background. NASA plans to launch the satellite into Mars’ orbit on Monday. NewsHour will live stream the launch. Image by NASA/Goddard

Mars is a cold, dry, dusty planet with a thin atmosphere, completely inhospitable to life on the surface. But scientists believe that Mars looked very different four billion years ago.

“What we see on Mars is a planet that seems very Earth-like 4 billion years ago. Not that it had a similar atmosphere, but in terms of what’s important for life — liquid water, access to the elements to build life — it’s possible we had two planets that had the potential for life and they diverged radically,” said Bruce Jakosky, the principal investigator for the Mars Atmosphere and Volatile Evolution mission.

So why did Mars become so inhospitable to life while the Earth flourished? Jakosky and his team think the answer is in Mars’ missing atmosphere. On Monday, NASA plans to launch the MAVEN satellite, which will orbit Mars and collect data that will explain the planet’s past and why it lost its water and carbon dioxide. The launch, from Cape Canaveral Air Force Station in central Florida, will be live streamed by the PBS NewsHour.

Mars’ atmosphere is extremely thin, less than one percent of the Earth’s, said Jim Bell, professor of planetary science at Arizona State University. That’s too thin for water to exist, Bell said; if you held a cup of water on Mars it would evaporate immediately, like it was in a vacuum.

But traces of Mars’ wetter past are etched into its geography, Bell said. Unlike Earth there were never jungles or pterodactyls, or even oceans, but satellite images and surface missions found dried up river beds, lakes and glaciers. And earlier missions found rocks and minerals that can only be formed with water, like clay, he added.

“That smoking gun is sitting on the surface. It’s a combination of geology and mineralogy that tell us there was water there,” Bell said.

First, Mars would have been warmer than it is today, he said. The sun was dimmer four billion years ago, but if Mars had a thicker, carbon dioxide-rich atmosphere, the resulting greenhouse effect would have made the planet warm enough for water — and potentially life, Jakosky said.

But Jakosky asks: “where did all that CO2 from early atmosphere go?” There are two options: underground or into space, he said.

Carbon dioxide on Earth dissolves into the ground, and shows up in carbonate rocks, Bell said. But so far soil analyses of Mars found very little carbon dioxide in the rocks, so MAVEN is looking for evidence that those gases escaped into space.

One theory is that at some point in its history Mars’ magnetic field around the planet appears to have “shut off,” said David Mitchell, the project manager for the MAVEN mission. Jakosky thinks without that magnetic field shielding the planet, the Martian atmosphere was stripped away atom by atom by solar storms.

MAVEN is going to test that hypothesis. The satellite will orbit the upper atmosphere in an elliptical orbit, circling 3,728 miles to 93 miles above the surface. There are eight instruments on board looking for the effects of solar wind on the Martian atmosphere and “sniffing” the air, analyzing its chemical composition, Mitchell said.

“With that data, we can project back in time and determine the erosion of the atmosphere,” Mitchell said.

And that will tell us if terraforming the Red Planet, or geoengineering its atmosphere and surface to support life, is possible, Jakosky said. In order to bring water and life to Mars, it needs a bit of its own global warming, he said, but that depends on where the planet’s carbon dioxide went.

“If you wanted to terraform Mars, the easiest way to do that is heat the atmosphere with carbon dioxide. If its [carbon dioxide] is being buried underground, it’s possible. If it’s being lost to space, it’s gone,” Jakosky said. “With Mars either answer is going to be an important one, scientifically and philosophically.”