The fin whale is a slender, graceful giant and one of the world’s largest mammals. It can grow as long as a tennis court and weigh as much as 10 elephants. It is known for an unusual feature: a jaw that is dark on the left side and white on the right, creating a sort of asymmetrical smile.

Scientists have found that this whale and its Mediterranean comrades face an insidious, deadly threat in the sea: toxic chemicals that seep into their bodies and build up in their blubber. These chemicals lead to to higher rates of death, disease and stillbirths among the whales and deformities in their offspring.

This is despite the fact that these chemicals have been banned in most countries for at least 14 years. The study was published in the journal Environmental Research on July 8. 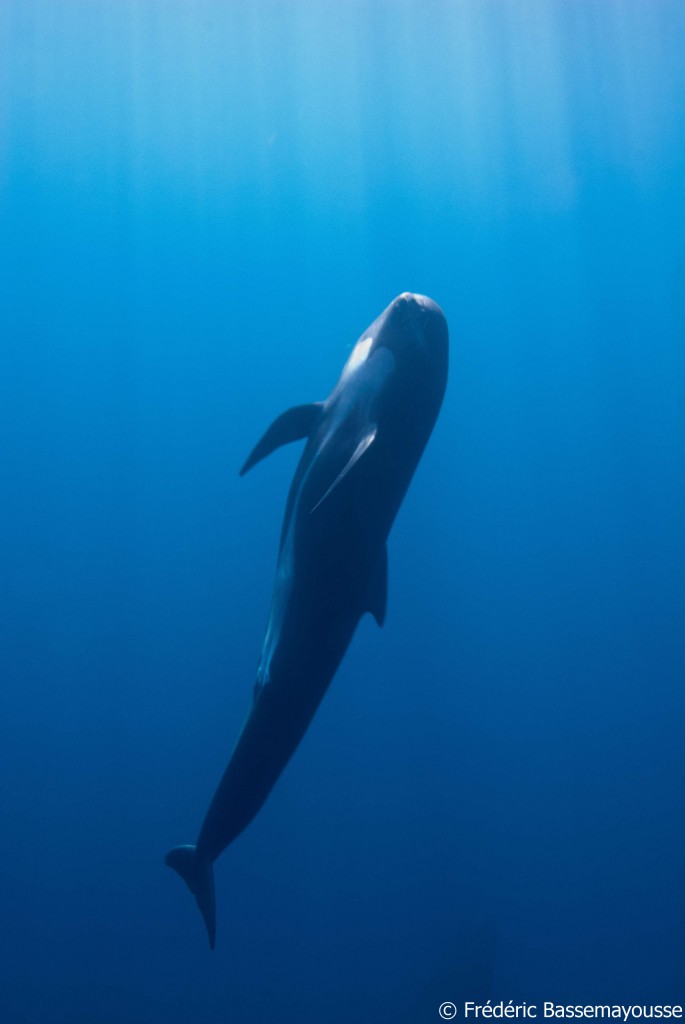 The long-finned pilot whale is a social, deep diver with a bulbous head and more brain cells than a human. Its dark grey coloring on top is complimented by a lighter underside – often appearing in the shape of a heart. In the Mediterranean Sea, these whales contain levels of PCBs in their fat stores that are 95 times higher than that of the same animals living at the same time off the coast of Tasmania, researchers have found. Photo by F. Bassemayousse

When it comes to hazardous chemicals, the Mediterranean Sea is a toxic soup. Long-finned pilot whales contain levels of PCBs in their fat stores that are 95 times higher than that of the same animal off the coast of Tasmania, researchers found.

Persistent organic pollutants are manmade toxins that don’t naturally degrade. In the 1950s, such chemicals were commonly used for industry and agriculture and found in tough plastics, electrical wire and pesticides. Half a century later, these chemicals were banned in most countries after being linked to infertility and weakened immunity, among other health problems. But the same durability that made the chemicals great for industry now poses lasting problems for our environment. They persist, carried by wind and water, and are accumulating in the food chain – especially in the Mediterranean sea.

Researchers acquired tissue samples from free-swimming whales by piercing them using a crossbow. The tissue was processed and analyzed using a technique called gas chromatography, which separates a sample into its pure components, counts how many toxins are present and identifies the toxins by their chemical signature. They examined fat, or blubber samples from 70 fin whales (balaenoptera physalus), 61 sperm whales (physeter macrocephalus) and 49 long-finned pilot whales (globicephala melas) in the Mediterranean sea. Blubber samples were screened for more than 30 pollutants including PCBS, or polychlorinated biphenyls and dichlorodiphenyltrichloroethane, or DDT — two chemicals that were banned in most countries by 2001. Then they compared their findings to previous studies. 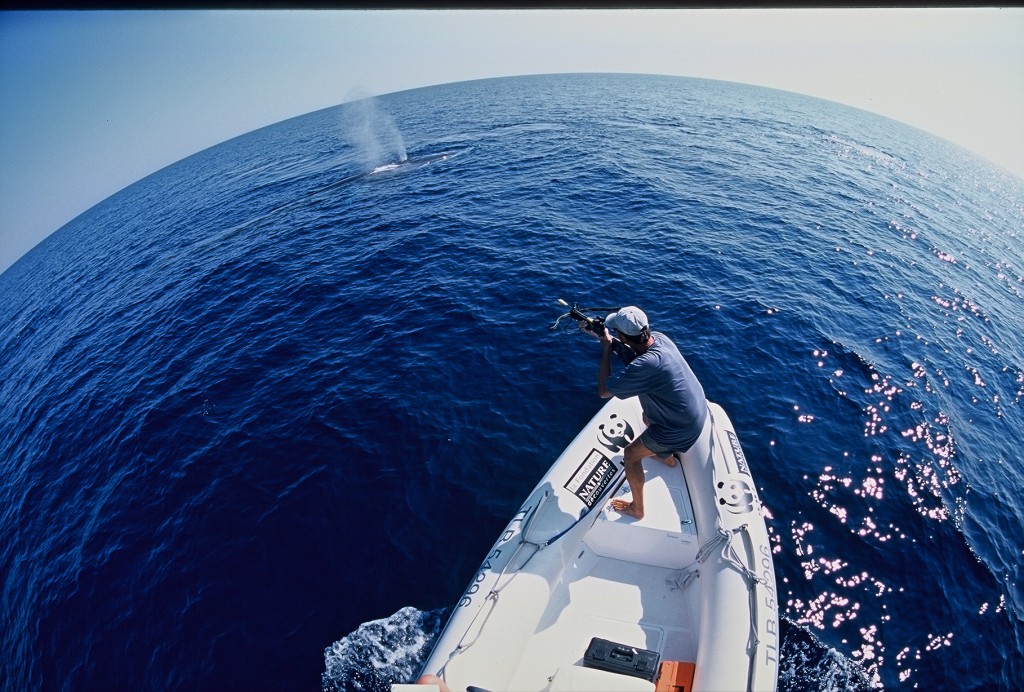 A researcher from the World Wildlife Fund in France obtaining a tissue sample from a whale in the Mediterranean Sea. Researchers detected high levels of chemical pollutants in these tissue samples. Photo by F. Bassemayousse

“The concentrations, not only for PCB, but for pesticides like DDT, are still very high in the Mediterranean despite the fact that in Europe, PCB was banned more than 40 years ago,” said Krishna Das, a marine scientist at the University of Liege in Belgium and senior author of the study.

The amount of PCBs in the blubber of the long-finned pilot whale, which is actually a species of dolphin, is more than double the threshold that scientists have determined as toxic for dolphins, Das said. A toxicity threshold has not yet been established for whales.

“It is quite shocking how high the levels were in the pilot whales and the sperm whales,” said Paul Jepson, a marine scientist from the Zoological Society of London’s Institute of Zoology who was not involved in the study. “I wasn’t totally surprised because the Mediterranean is an incredibly polluted region – arguably one of the most polluted hotspots globally for PCBs.”

To avoid high consumption of marine pollutants, pregnant woman are encouraged to limit their fish intake, Jepson said. “But our whales or dolphins can’t be given that advice.”

Persistent organic pollutants are lipophilic, meaning they dissolve in fats and not water. When dumped into the ocean, they stick to plankton or other tiny organisms. These creatures and their accompanying pollutants get gobbled up by bigger marine animals. The result: mammals higher up on the food chain accumulate fat stores latent with toxic chemicals that never get excreted.

When whales go through periods of starvation, their blubber breaks down, and POPs can get released into their bloodstream, wreaking havoc on the immune and reproductive systems.

The concentrations that researchers observed in these Mediterranean whales could decrease immunity and increase their risk for disease, Jepson said. 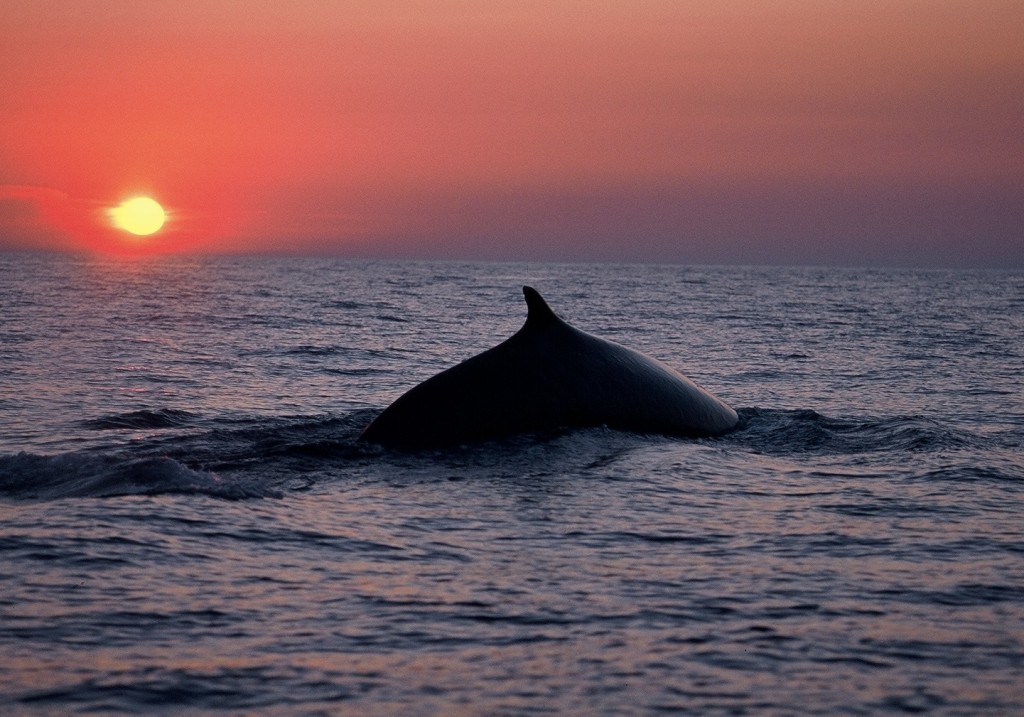 A Fin whale, Balaenoptera physalus, swimming in the Mediterranean Sea. These whales contain quadruple the amount of the toxic chemicals known as PCBs than the same whales in the Atlantic Ocean two decades ago, researchers have found. Photo by F. Bassemayousse

“But the biggest concern, from a conservation perspective, is that they can suppress the reproduction of adult females.” Female whales with high toxin levels are at risk of miscarriage, stillbirth or giving birth to babies with malformations.

Marine mothers use their fat stores to produce rich milk for their babies. These calves can rely on this milk for many months. In dolphins, this lactation period can cause babies to take on 80 percent of their mother’s chemical burden. “The highest concentrations ever recorded have often been in newborn calves,” Jepson said.

And the chemicals don’t break down. Scientists are working to develop safe, cost effective disposal methods, but the dominant disposal strategy is simply storing them in isolation. The chemicals can also be chemically treated or burned, but such treatments can be dangerous, costly and produce other toxic residues.

In addition to the 150 million people that live on the Mediterranean coast, 170 million tourists visit each year. High occupancy is harsh on the ecosystem. Industrial waste, agricultural runoff, naval traffic, fishing, shipping and offshore oil activities all contribute to the sea’s pollution.

Unlike the Atlantic Ocean, the Mediterranean sea is a semi-enclosed body of water, making dilution a slow process. 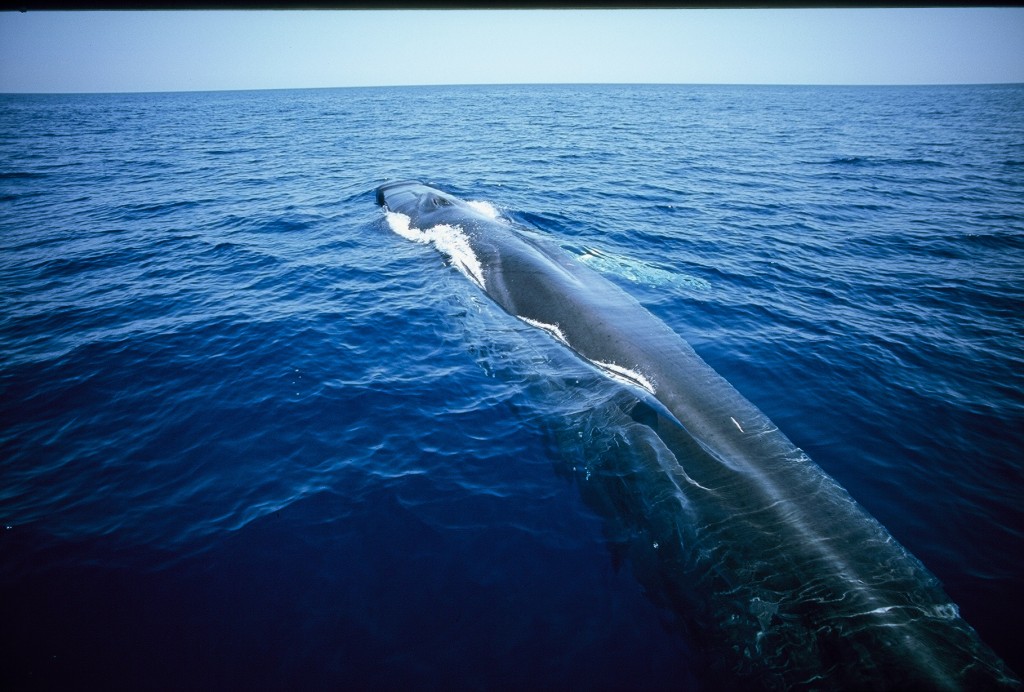 The fin whale is a slender, graceful giant and one of the world’s largest mammals. It can grow as long as a tennis court and weigh as much as 10 elephants. Photo by F. Bassemayousse

Still unclear is why Mediterranean whales are now showing higher pollutant levels than they did when PCB’s were still in use.

Das suspects that these high pollutant levels are more than just an unwanted legacy. “There is a strong use of black market PCBs. But that is only a hypothesis,” she said, and added that old equipment that relies on PCBs could have been sold to developing countries.

Abiola Olanipekun from the United Nations Environmental Program, says it is possible that countries that agreed to ban the chemicals could still be illegally importing and using them. Lack of monitoring or general unawareness could all contribute to their continued existence.

Jepson theorizes that the increases are due to storage leaks or illegal dumping brought about by pressures to comply with pollutant legislation. “I’d be surprised if anyone was using them, but I think people have problems getting rid of them because they are so persistent – that is probably more the problem. Regulations to remove PCBs can be quite expensive,” Jepson said.

Countries badly afflicted with malaria still use DDT (not to be confused with DEET), to fend off mosquitoes.

Since the 2001 ban of the Stockholm Convention’s “dirty dozen,” more pollutants have made the list, including some polybrominated diphenyl ethers or PBDEs. These chemicals are fire resistant, residing in our computer screens and the foam of our furniture. Jepson’s lab started to detect PBDEs in dolphins off the coast of the United Kingdom in the 1990s, but levels have decreased since some were banned in 2004 and remain relatively low.

As of 2013, 179 countries ratified the Stockholm convention. Among the countries that haven’t resigned is Italy, which borders the Mediterranean sea, and the United States.

The US still manufactures and uses PBDEs that are outlawed in Europe. In order to re-sign the Stockholm Convention, two thirds of the senate must vote and the US must change current legislation that conflicts with the treaty – the Toxic Substances Control Act and the Federal Insecticide, Fungicide and Rodenticide Act.

Left: A fin whale, Balaenoptera physalus, in the Mediterranean Sea. These whales contain seven times the amount of the toxic chemical DDT than the same whales in the Atlantic Ocean two decades ago, researchers have found. Photo by F. Bassemayousse