Scientists trace cancer-causing chemical in drinking water back to methadone

Like death and taxes, at some point in life, drinking someone else’s human waste becomes inevitable.

When water flows from the many pipes of our homes, the first stop is a wastewater treatment factory, where most hazardous chemicals and microbes are removed. In an ideal scenario, city planners have geographically positioned wastewater facilities so that none of the drainage flows into another’s city’s drinking water supply. But if you live downstream from any population, then you’re likely drinking someone’s wastewater, says Arizona State University environmental engineer Paul Westerhoff.

Enter methadone. Methadone is the latest member of an infamous club. Like birth control hormones and the antibacterial ingredient triclosan, methadone leaks into waterways and poses a health risk when it filters into our drinking water, according to a new study in the journal Environmental Science & Technology Letters.

But unlike some forms of pharmaceutical pollution, the danger of methadone waste doesn’t come from the drug itself, but from a chemical reaction with a common wastewater disinfectant. The product of this reaction is the carcinogen N-nitrosodimethylamine or “NDMA” for short. The World Health Organization describes NDMA as “clearly carcinogenic” due to its ability to cause stomach and colon cancer after ingestion.

“It’s a very important paper, as NDMA is a very potent carcinogen,” said environmental chemist Susan Richardson of the University of South Carolina, who wasn’t involved with the study. “It’s being commonly found in drinking water well above the health reference level for cancer, and the U.S. Environmental Protection Agency is currently deciding whether to regulate it.”

About 4 million methadone prescriptions are issued annually to treat conditions like heroin addiction or chronic pain disorders. A little known fact about methadone is that approximately 28 percent of the drug does not get absorbed by the human body after ingestion, but instead, it gets excreted in urine.

Which brings us back to wastewater. On average, a small fraction of wastewater gets into the drinking supply, Westerhoff said. It’s less than 1 to 2 percent of streamwater — but during a modest drought up to 30 percent of an urban water supply can be of wastewater origin.” 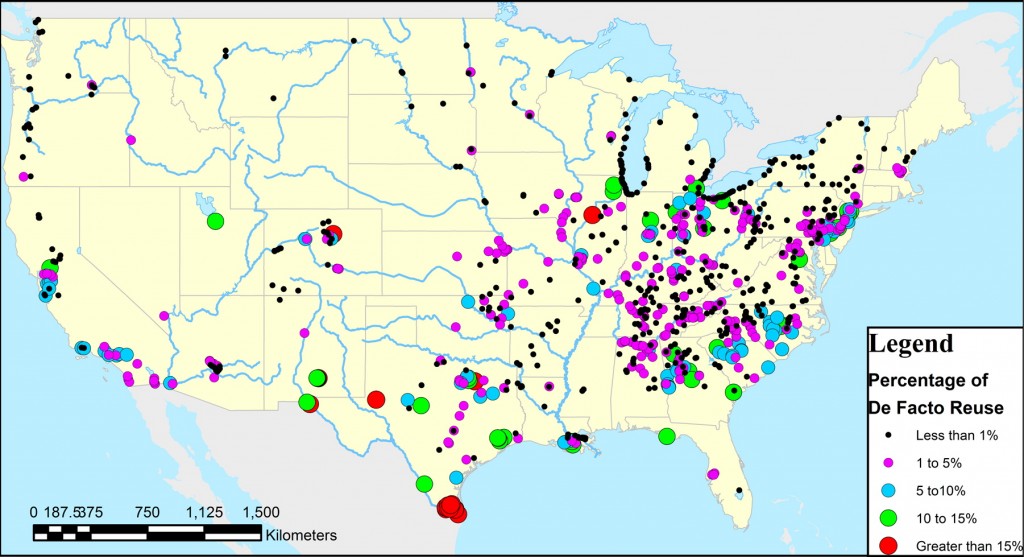 In an earlier study, Paul Westerhoff and Jacelyn Rice measured the magnitude of de facto wastewater reuse at 1210 of the 1292 drinking water plants in the U.S. that primarily use surface waters and serve greater than 10, 000 people. Credit: Rice and Westerhoff, Environ. Sci. Technol., 2015, 49 (2), pp 982–989

Westerhoff’s team specializes in finding what gets left behind in that wastewater. For instance in January, they reported that urban sewage might harbor millions of dollars in gold.

For their new study, Westerhoff’s team plus colleagues in Colorado and Toronto went hunting for potential sources of NDMA in runoff from a nearby wastewater plant in Arizona. They focused on water treatment plants that use a disinfectant called chloramine (not to be confused with chlorine). In 2010, nearly a quarter of the U.S. drank water treated with chloramine disinfectants. It’s known that some industrial compounds, agricultural herbicides or over-the-counter drugs like antihistamines can react with chloramine to create NDMA. But the environmental levels of these chemicals in most places are too low to account for the abundance of NDMA found in wastewater supplies.

To find new sources, Westerhoff’s team treated wastewater like the scene of a car accident. When two vehicles hit each other, their wreckage sprays in a pattern that detectives can later use to reconstruct the incident: the speed of the cars on impact, the angle of the collision.

The same applies to chemicals.

“If you smash one molecule hard enough, it will break into a fragment,” said lead author and ASU environmental engineer David Hanigan. In this case, he was looking for a special piece of wreckage — a compound named dimethylamine that forms the backbone of NDMA.

They passed the wastewater samples through a device — a QTOF mass spectrometer — that could identify a dimethylamine “fragment” in order to trace its origins. After scanning 800 likely compounds, the search landed on methadone. They found that methadone likely accounted for up to 62 percent of the NDMA in the wastewater samples.

Next, they examined whether methadone could pass from wastewater to potable reservoirs, by testing 10 drinking water sources spread across the U.S. and Canada. (The locations weren’t disclosed, given the sensitivity of the research).

“These weren’t rivers or streams in the middle of nowhere. People are drinking this water,” Westerhoff said.

Half of the drinking water samples carried detectable amounts of methadone — in the range of tens to hundreds of nanograms. This methadone content would be too low to get a person high, but more than enough to spawn a risky level of NDMA, the researchers found. They calculated that the consequent levels of NDMA would be enough to be banned in places like Canada, Massachusetts and California, where the carcinogen is regulated. 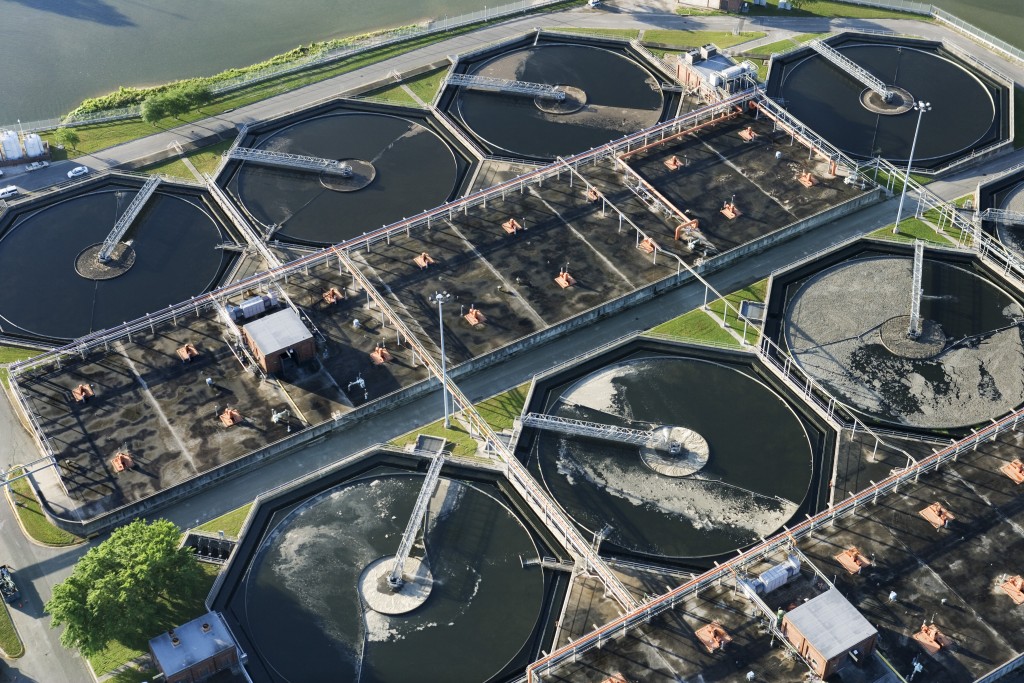 Human-generated chemicals are increasing in the environment and in wastewater at treatment facilities (pictured), researchers say. Photo by Jupiterimages/Getty Images

So what’s the remedy?

It’s unlikely that doctors will stop prescribing methadone, since its use is so vital in the treatment of chronic pain and heroin recovery. Chloramine disinfectant is increasingly used in waste management, given that it produces fewer negative chemical byproducts than chlorine.

One possible option involves attacking pharmaceutical pollution before it reaches your lips, Richardson said. She calls for the broader the use of activated charcoal — known as granular activated carbon — which soak up methadone, organic matter and other pharmaceuticals without adding chemicals to the water.

The bigger question is who should be responsible for treatment, said Westerhoff, the downstream drinking water utility or the upstream wastewater plant that is collecting the methadone? Using activated charcoal at treatment plants requires an expensive upgrade in technology, which may explain why only 10 percent of U.S. drinking water is handled this way. In 1992, Cincinnati reportedly spent $63.9 million to add activated carbon to their water treatment, though the final cost to consumer averaged about $1 per month. (Local utility companies issue “water quality reports” on an annual basis that describe how your water is treated)

“In the end, everyone is responsible for these chemicals, whether they’re accumulating in a whale in the Arctic or showing up in your drinking water,” said Westerhoff, “We can do real damage to our river systems. That’s the takeaway.”