At a high-security lab in Fort Detrick, Maryland, where researchers study the world’s deadliest diseases, Dr. Peter Jahrling of the National Institute of Allergy and Infectious Diseases was reflecting on the Middle East Respiratory Syndrome virus, known as MERS.

It was early May, and hot spring sun beat down the windows of the $105 million Integrated Research Facility. A quick glance out the windows, and you could easily mistake the wide lawns and orange buildings of the NIAID’s campus for a college quad — provided you ignored the guards patrolling the grounds with heavy pistols.

Much of the recent research at the facility has been feverishly focused on the Ebola virus. High-tech imaging machines scanned the bodies of Ebola-infected monkeys and mice while scientists in spacesuits peered at their tissue specimens in a dish. They were part of the crew that helped prep Zmapp for use against Ebola, and they aided the NIAID’s Vaccine Research Center in the hunt for an Ebola immunization.

Meanwhile, drugs for MERS, along with its cousin SARS, were lagging behind.

“I think MERS is kind of eclipsed by the more flashy viruses like Ebola,” said Jahrling, chief scientist of the Integrated Research Facility and the emerging viral pathogens section, as we toured the hallways of the 11,125 square feet lab that brought to mind a navy ship. Through portholes in the wall, we peered into a set of airtight “hot” rooms, where scientists handled deadly pathogens in head-to-toe protective gear. These spaces run adjacent to “cold” rooms where our crew could stand in normal clothes. Long, air-sealed tubes resembling blow pops criss-cross between pathogen-laden and pathogen-free rooms. To examine an animal with a disease like Ebola, scientists place it on a sliding table on one end of the tube, which then rolls into the cold-room side, where MRI, X-ray and CT scanners can go to work 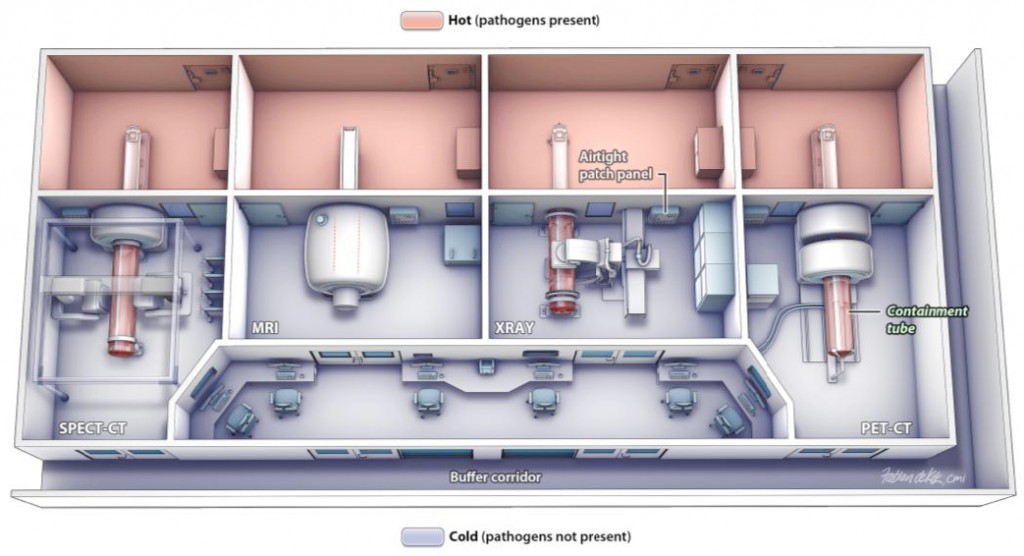 Schematic of the imaging suites at the NIAID’s Integrated Research Facility . Courtesy of Peter Jahrling/NIAID 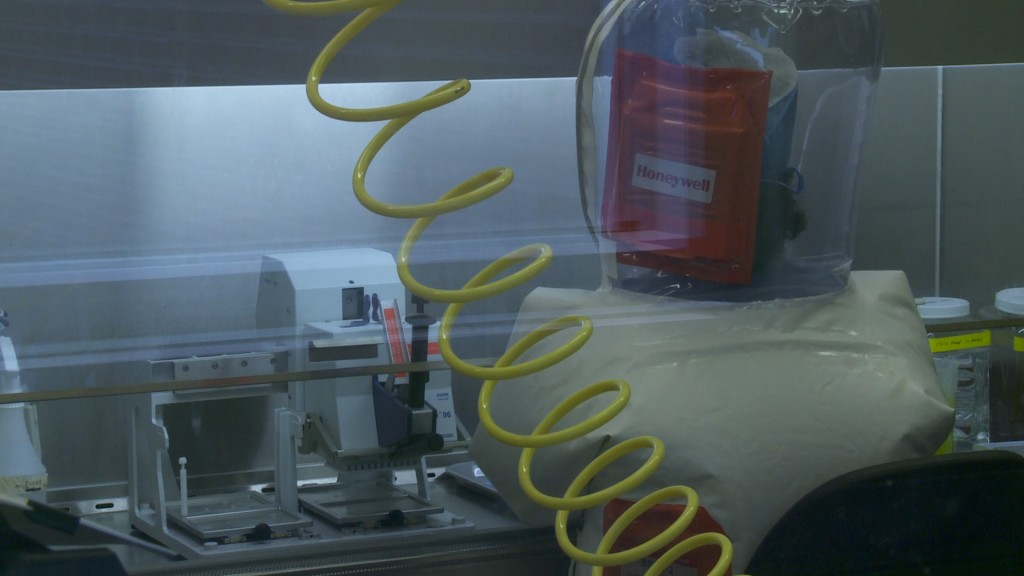 A scientist works inside an airtight biosafety level-4 lab at the Integrated Research Facility in Fort Detrick, Maryland. Photo by Kyla Calvert/PBS Newshour. 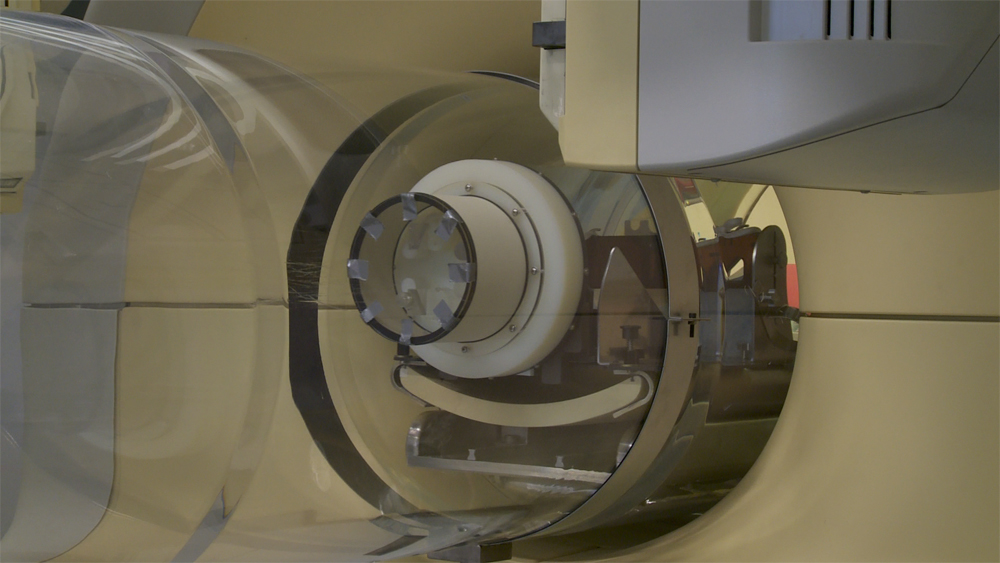 Imaging table slides between pathogen-laden and pathogen-free rooms at the at the Integrated Research Facility in Fort Detrick, Maryland. Photo by Kyla Calvert/PBS Newshour.

On that day, Jahrling told me that “MERS research has suffered from very limited funding and not much interest.” He couldn’t have known that less than a month after that conversation, South Korea would be gripped by an outbreak of the disease.

So far, the MERS virus has infected 36 people and caused three deaths. More than 3,000 people have been recommended for quarantine, and officials have shuttered over 1,000 schools, as healthcare workers try to control the largest outbreak of the virus seen outside of the Middle East, where the disease was discovered three years ago.

These recent cases shed a harsh light on a virus that’s been largely overlooked, disease researchers say. They also raise troubling questions about how this virus could have spread so far, so fast.

Much like Ebola and other neglected diseases, our collective vulnerabilities with MERS take many forms — ranging from general lack of knowledge on the condition to an absence of vaccines and treatments for the disease. These gaps exist despite the virus’s high mortality rate — about 40 percent of those infected die — and its close ties to the SARS virus that caused a global epidemic a decade ago before dropping off the radar.

Like SARS, MERS is a coronavirus. It was first identified in Saudi Arabia in 2012 and spreads via coughing. And with symptoms like fever and shortness of breath, the disease is easily confused with influenza or the common cold.

Based on DNA sequencing, researcher speculate that MERS coronavirus started in infected bats in Egypt or the horn of Africa (left panel). They suspect that the winged mammals transmitted the microbe to one-humped camels, where the virus circulated possibly for decades, before hopping into humans. Since camels are an accessible intermediate host, some groups have proposed vaccines for the hooved animals to prevent future spread to humans. Source: Papaneri, AB et al. Expert Rev. Vaccines. 2015.

Was patient 0 a superspreader?

In Seoul, healthcare workers didn’t suspect MERS in the initial patient — a 68-year-old businessman — until it was too late. That patient — let’s call him MERS Mike* — visited two hospitals and two clinics in South Korea over the course of a week, before being diagnosed on May 30. His walkabout explains why so many people have been quarantined.

Since MERS wasn’t suspected, it’s possible that the appropriate medical precautions weren’t used, said Peter Embarek, who manages the World Health Organization’s MERS task force. One misstep could have involved a procedure known as mechanical ventilation, wherein a tube is passed down the throat to aid breathing — a common treatment for severe respiratory disease. 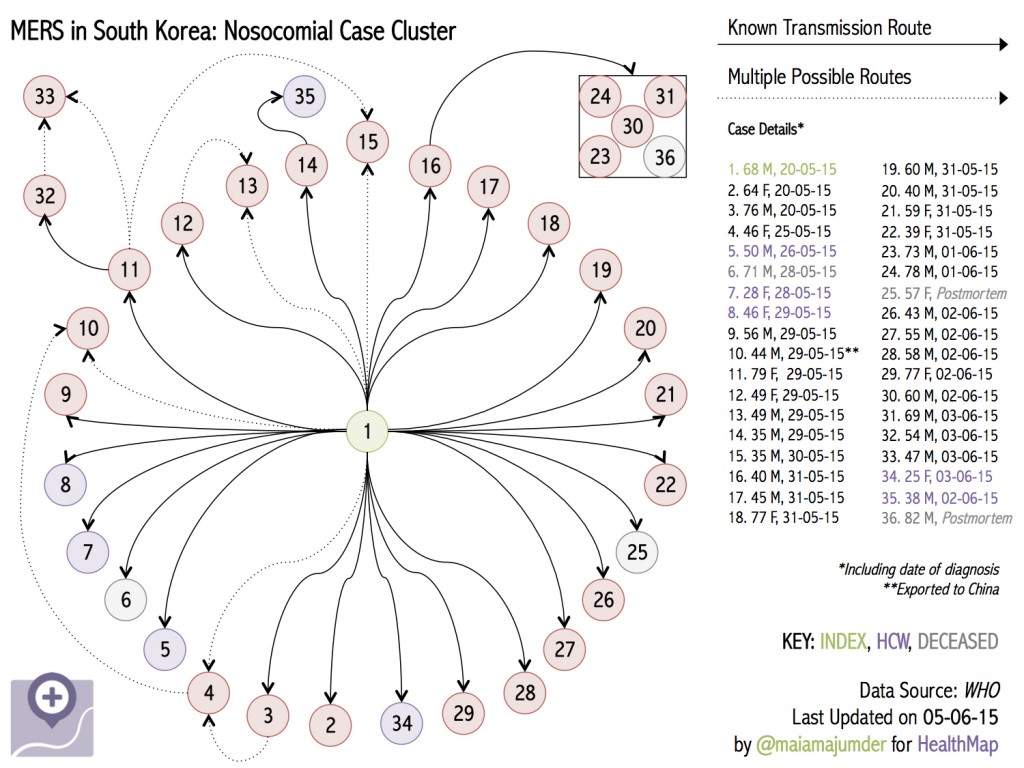 Chart of the MERS patients linked to the initial case (center circle marked “1”). This index case has infected 27 people as of June 5. Courtesy of Maia Majumder.

“That process can generate aerosols from the virus particles in the lungs and lead to a larger spread, said microbiologist Ralph Baric of the University of North Carolina, Chapel Hill. “During the SARS epidemic, these mechanical procedures were sometimes associated with superspreaders.”

But let’s back up. A superspreader is an infected patient who is capable of infecting dozens of people at once, rather than the normal transmission rate of two to three people. Some early reports claim that MERS Mike is likely a superspreader, given the extent of the outbreak — 30 of the 36 total cases have been linked to him and where he was finally hospitalized May 15 to May 17: St. Mary’s in Pyeongtaek about 35 miles south of the capital Seoul. The infection has mainly spread among other patients and healthcare workers at this clinic — a pattern that parallels what’s happened in the Middle East. Almost all MERS outbreaks have been confined to hospitals with little human-to-human transmission reported in outside communities. 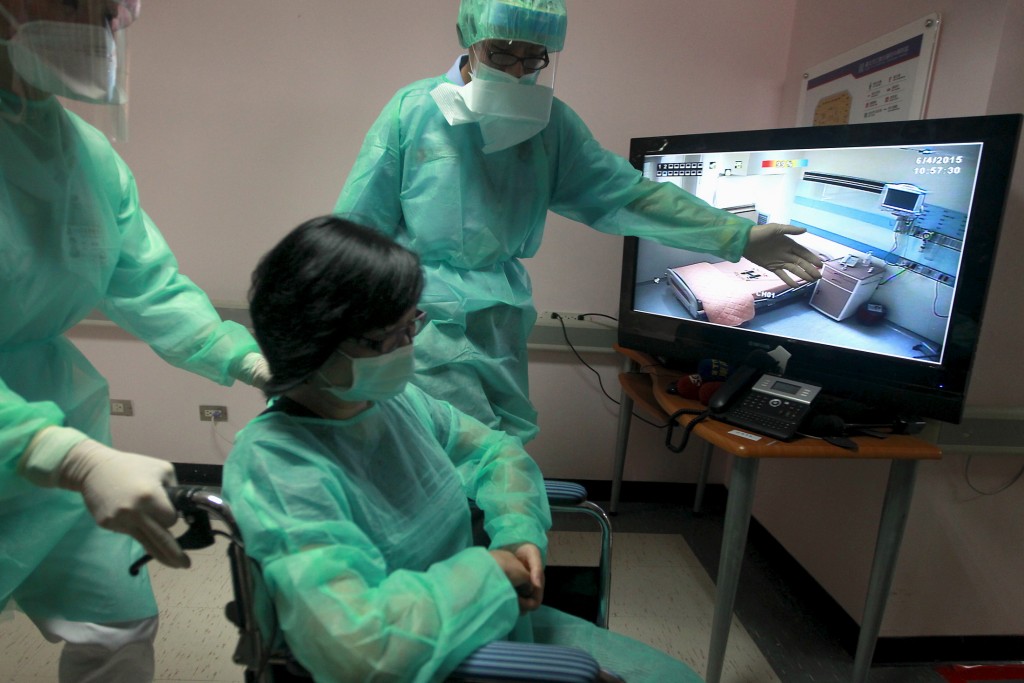 Medical personnel send a simulated patient to a negative pressure isolation room (shown on the monitor) during a drill, as part of preparations in the event of an outbreak of the Middle East Respiratory Syndrome (MERS), at the Taipei City Hospital Chunghsin Branch in Taipei, Taiwan, June 4, 2015. REUTERS/Pichi Chuang

Embarek, however, cautions against using the term superspreader and says it’s too early to tell: “It’s a very loaded term, and we’re still at the stage of gathering answers to basic questions.”

For instance, Korean officials are currently attempting to identify the virus’s DNA sequence. That would allow scientists to compare this patient to previous cases to determine whether “Mike” caught a regular strain during his travels or a more potent mutant.

But even after scientists obtain the genetic info, reaching the superspreader verdict might remain tricky.

“There’s nothing known about the biology of the virus with relationship to the mechanism of the superspreader events among MERS or even SARS for that matter,” Baric said. In other words, no one knows if the mutations in these viruses can cause superspreading.

Baric said in the case of SARS, it was “100 percent clear” that mutations expanded the epidemic. Some changes involved the virus’s spike protein, which acts as the key that penetrates our cells and ultimately allows the disease to spread through the body.

What’s not clear is whether those viral changes contributed to the phenomenon, Baric said, given that some hospital superspreaders were treated with mechanical ventilation, which could exacerbate transmission.

For one thing, individual differences in people’s immune systems can lead some patients to carry and cough more virus than others, known as shedding.

“These rare super-spreader events are often due to context more than anything else. Different rates of viral shedding contribute to different rates of secondary infection [in subsequent patients],”

“From a mathematical point of view, this case is a superspreader, and the fact that he has infected 26-plus people is important,” she said. “But with ideal infection control, even these super-shedders won’t become super-SPREADERS.” 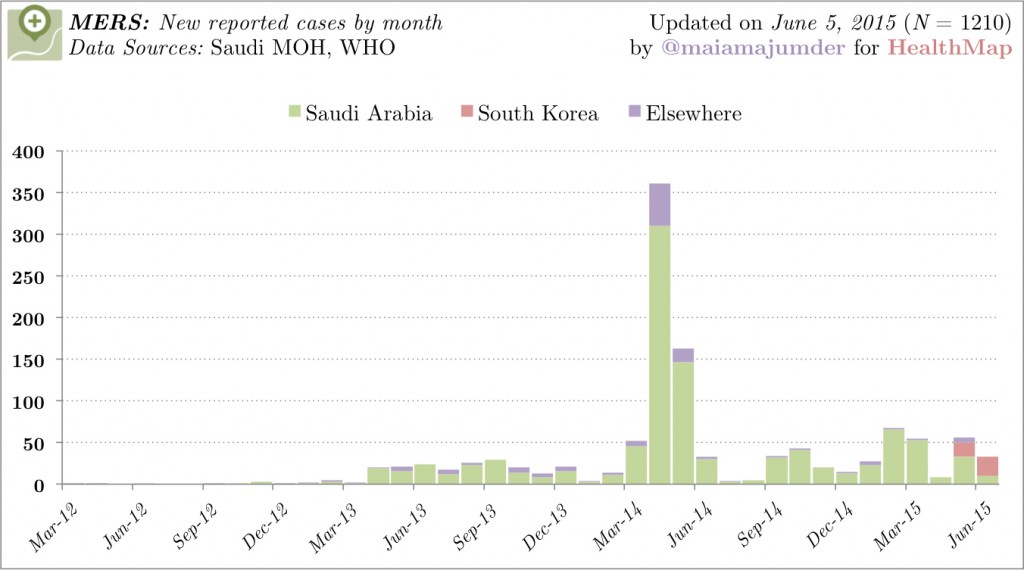 Putting a cork in MERS and SARS

Harvard University immunologist Wayne Morasco has developed one of the leading drug candidates for MERS. The drug would use our naturally occurring human antibodies to attack the virus.

“We have built a 27 billion-member library of human antibodies, so we panned that source of antibodies to identify one that blocked the MERS spike protein that is on the surface of the virus and is used to begin virus entry, Morasco said. They found seven candidate antibodies, one of which blocked the virus even when it tried to mutate and escape treatment. The antibodies have been licensed to the biotech Abviro, which plans to conduct a clinical trial in the near future.

Stanley Perlman, an immunologist and coronavirus expert at the University of Iowa, said this treatment falls into the same category as Zmapp, which was used widely during the Ebola outbreak. Perlman says that Public Health England has a similar antibody on the verge of clinical trials, and a group at the National Institutes of Health possesses a good candidate too.

But in the end passive antibodies are just a temporary fix, he said: “If you thought that someone was exposed [to MERS], then you would want to use a passive antibody, but it would only be good for two to three weeks. But if you have a long-term problem, then that’s clearly not the way to go.”

Scientists are working on immunizations that would induce longer lasting protection — akin to the flu or measles vaccines — but “none of those are near being tested for clinical trials,” Perlman said. (However, Inovio Pharmaceuticals is close with one DNA vaccine candidate.)

One stumbling block is the limited number of good animal models for MERS. Jahrling says that MERS produces very “minimal disease” in Rhesus monkeys. Perlman’s lab reported the creation of the first mouse model for MERS in early 2014, but mice can’t fully simulate the human condition.

Merasco feels if there is ever an outbreak of MERS, or if SARS returns, Congress will want to know what scientists have done to develop a therapeutic and protect us. But the funding needs to match the future concern. MERS has infected less than 1,200 people worldwide, and SARS hasn’t caused a recorded infection since 2004.

“I don’t think that you can ever ignore this, and we do need to develop therapeutics, but whether these projects get the kind of money that they need to ensure that the vaccine is fast tracked is the issue,” he said.

Until then, Peter Embarek of the WHO believes communication with the public and better education of healthcare workers is the best recourse. South Korea’s response — once they became aware of the disease that is — has provided a good model.

“They’ve been extremely open and forthcoming about new cases and communicating to the public about what the country is doing,” Embarek said. “Addressing all of the fears, given that most people haven’t heard of MERS before, is really important for the common good.”

Left: Ripe with high-tech, high-security labs, the Integrated Research Facility at Fort Detrick, Maryland is one of few places in the world hunting for vaccines for Middle East Respiratory Syndrome (MERS) and Ebola. Photo by Kyla Calvert/PBS Newshour