Monday: Seep Detected Near BP Oil Well; Cap to Stay for Another 24 Hours 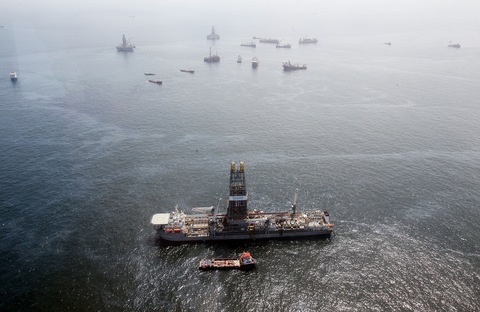 Retired Coast Guard Adm. Thad Allen said Monday morning that BP will be allowed to keep the cap on the oil well in the Gulf of Mexico for another day despite a seep in the sea floor.

BP has promised to watch for signs of new leaks underground, but a seep would be a major setback to the operation that has stopped the leaking of oil since the experimental cap was closed Thursday. Federal and BP officials released no information on the size of the seep, when or how it was found or its location.

Allen, the national incident commander for the spill, said late Sunday that a seep had been detected a distance from the oil well, and in a letter to BP demanded that the company increase its monitoring of the sea floor. Allen ordered BP to update him within 24 hours on how the cap testing will proceed.

Over the weekend, the federal government and BP disagreed over the next steps. On Saturday, Allen said the cap would be hooked up to a pipe to pump oil to ships. But early Sunday, BP chief operating officer Doug Suttles said the cap should stay clamped shut to keep in the oil until relief wells are finished. Allen has since said that BP would follow the government’s plan.

Low pressure readings might mean a leak elsewhere in the well bore, possibly deep in the bedrock, which could make the seabed unstable. Oil would have to be released into the water for up to three days to allow crews to hook up pipes to the ships.

U.S. Secretary of State Hillary Clinton announced $500 million in new development projects for Pakistan, as the Obama administration seeks to build support in the nation for the war against al-Qaida and the Taliban.

The projects, which include hospitals and new dams, are part of a $7.5 billion aid effort.

A two-year investigation by the Washington Post shows that secret U.S. intelligence gathering has grown so much since 9/11 that no one knows its exact cost or even how many people are involved.

The BBC breaks down the major findings here.

Six Afghan policemen and two U.S. troops were killed Monday by roadside bombs in southern Afghanistan. On Sunday, Vice President Joe Biden said that progress in Afghanistan has been “a tough slog,” but said U.S. troops will begin leaving in July 2011.

A suicide bomber has killed at least 43 people and injured 40 more southwest of Baghdad. The attack targeted government-backed Sunni militia members lining up to be paid. The Sunni militia fighters, known as the Sahwa or Awakening Councils, were once allied with al-Qaida, but turned against the militant group in 2006.